The fashion and tendencies behind the Chicano subculture -- originating in the Mexican-American empowerment movement of the 1940s through 1970s, but now often associated with Los Angeles street gangs -- has found a new home in East Asia. Stemming from the “lowrider” car culture popular in Japan , Tumblrs of Japanese 'cholas' and 'cholos' can now be seen around the internet. YouTube videos of Japanese 'cholos' with their arms raised high as they rap next to hopping cars and Japanese 'chola' artists, like MoNa a.k.a Sad Girl, can be heard mixing Spanish, English and Japanese in their music.

According to Bangele D. Alsaybar's book Youth Groups and Youth Savers: Gangs, Crews, and the Rise of Filipino American Youth Culture in Los Angeles, in the 1980s and 1990s the Filipino community in East Los Angeles underwent a similar connection with 'cholo' culture. Members of Filipino gangs, like Satanas, referred to themselves as “Pinoy Cholos” and took in the 'cholo' fashion -- some believing the oversized-clothes look originated from early Filipino farm workers.

But the Japanese affinity for Chicano culture seems to be making its mark in the United States as well, where music labels representing Chicano rappers have recognized the East Asia archipelago as an important market for their artists.

"Japan has been more of an avenue for profit," Jaime Diaz, President and CEO of Urban Kings Music Group told the OC Weekly. "We distribute to stores out there and it has helped us out a lot. Japan will be the first place to buy product from independent artists."

The phenomenon in Japan, however, has caught many by surprise, including a California State University Chicano Studies Professor who, while looking for a topic to write about during her graduate studies, picked up a Japanese lowrider car magazine.

“I opened up the pages and I see all these Japanese guys dressed up like gangsters and cholos and waiving the Mexican flag. And I was like ‘where is this? It’s in Japan,’” Professor Denise Sandoval told the university’s Daily Sundial. 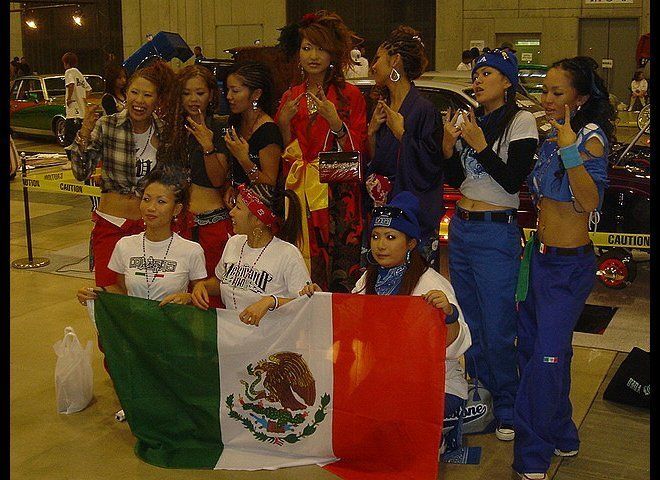