To the West, the world of Japanese game shows is best known as a technicolored whirlwind of half-naked bodies, sadomasochistic physical challenges, and the occasional whimsical bunny rabbit head. In short, any reasonable person would assume they couldn't be real. The stereotype today is a bit of a misnomer -- this brand of scandalizing, borderline-torturous television is being phased out after reaching its apex in the '90s. That said, it's far from completely dead. Every so often a Japanese show like last year's "Orgasm Wars" surfaces to remind the world that, when it comes to baffling, jaw-dropping game shows, Japan truly has no rival (don't worry, the U.S. still has a lock on terrible reality TV).

Below, we offer you some highlights:

In this deliciously hilarious and straightforwardly titled game, celebrity contestants must guess which of several apparently inanimate objects are candy, and which are not candy. They must then take a big, ravenous bite of the objects they believe to be candy, thus ending up with a yummy hunk of sugary goodness or a humiliating mouthful of whatever random item that actually is. The candy is made from Japanese "sokkuri sweets" that can be molded into crazy-intricate shapes. Below, is he biting into any old picture frame, or one delectable piece of chocolate?

You win! Or something.

So, after some introductions and trash talk, the challenge commences, each man trying to humiliate the other -- an apparent trend in Japanese game shows:

Will one man's staunch heterosexuality be impeached by another man's sexual prowess? You'll have to find out for yourselves, cause we stopped watching. Sexuality's a spectrum, dudes.

In this charming bit of highbrow entertainment, a lube-soaked middle-aged man attempts to slide across a slippery row of young, bikini-clad women.

That's one way to turn your midlife crisis into split-second, small-screen fame.

This competition appeared on Japanese variety show "Downtown no Gaki no Tsukai ya Arahende!!" which has brought you pain, humiliation and vaguely cruel hilarity since October 3, 1989. Players are supposed to catch the marshmallows with their mouths, while their heads are attached to a rubber band. If this isn't sickeningly funny for you to watch, you probably won't like many other Japanese game shows.

5. Man Eats Spaghetti In A Dryer

Ah, yes. The classic trivia game, with a "loser gets a face full of winner's butt" twist. The competition also appeared on Japanese variety show "Downtown no Gaki no Tsukai ya Arahende!!."

It sounds like exactly what it is: The perfect consolation prize for anybody who's pissed they didn't qualify for luging in the Winter Olympics. Contestants are launched at enormous bowling pins and pushed down this sloped lane. The finale of U.S. reality show "The Amazing Race 23" spotlighted the sport, cause, of course.

"Human Tetris" is the Western nickname for the game, which appeared on Japanese game show "Tonneruzu no Minasan no Okage deshita." As you may have guessed, it's basically the human version of your favorite GameBoy time waster. Contestants must jump and maneuver their bodies through the moving gaps in the wall. Unfortunately, they are not human-friendly shaped gaps, so this game appears to be a lost cause.

That said, it's still pretty entertaining to watch. It even made its way to the U.S., where for some reason, it didn't last.

Hey, I wonder what happens when you strap binoculars to people's heads and make them play soccer?

That, friends, is what happens.

How many coins can your cleavage hold is the name of the game in this fabulous mix of capitalism and objectification of women.

How many coins does it take to buy back one's dignity?

Here, men attempt to knock down blocks, behind which stands a naked woman. Meanwhile, they are attached to ropes, which other men use to pull them into a nice, warm bathtub of tar.

He does it for the ladies.

It doesn't stop there:

These clips show just some of the best moments in a sometimes whimsical, sometimes depraved or sadistic, but always at the very least ... creative genre, in which Japan truly has no equal.

You Have To See These Japanese Game Shows To Believe Them. But Even Then You Won't.
Meanwhile, In Japan... 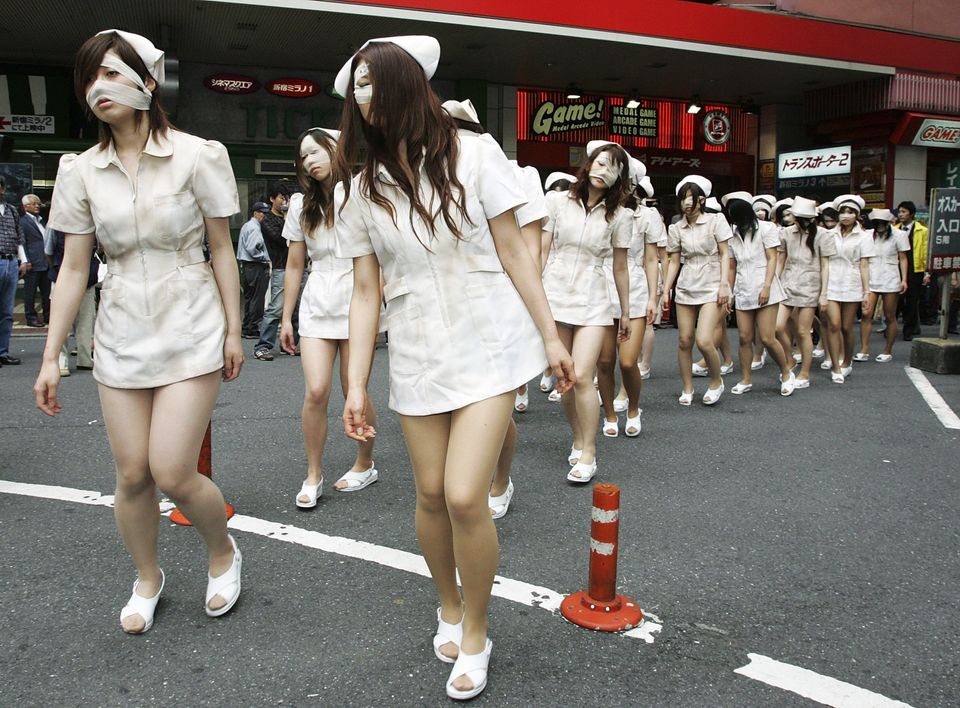 1 / 19
"Silent Hill" Promotional Event In Tokyo
Like that thing you saw in the street that gave you nightmares for weeks? Play the video game!
Getty Images