I first met Kazuko Tatsumura, OMD at a Christie's benefit for Tibet House at Rockefeller Center. We began to chat about Japan, where I had once studied, as well as Tibet and the many Tibetans living along the Chinese border in India. What captured my attention was that she had agreed to help build a school at an orphanage for Tibetan children in northeast India, endorsed by the Dalai Lama. As the founder of a network of orphanages around the world, I was captivated. 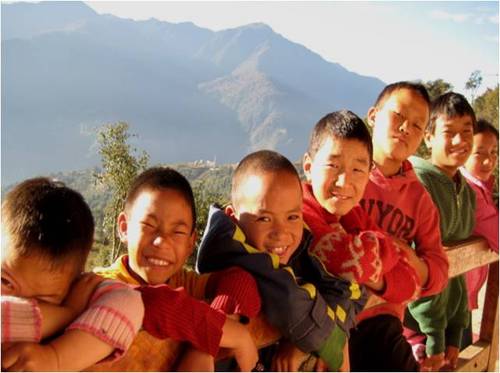 The Dalai Lama asked a doctor in NYC to build a school for Tibetan orphans in India.Photo courtesy of Dr. Kazuko Tatsumura.

Although Leila and Hank Luce had been supportive of Tibet House and the Dalai Lama, I have never met His Holiness. To meet someone who had taken on such an important project for the Dalai Lama mesmerized me. I wanted to get to know more about this woman, Dr. Kazuko, which happened quickly. She soon invited me to the Japanese Ambassador's home to celebrate the Emperor's birthday, and the next week had my partner and me over to her Japanese-style apartment overlooking Lincoln Center where she practices Oriental Medicine. We began to learn more about her efforts in India. 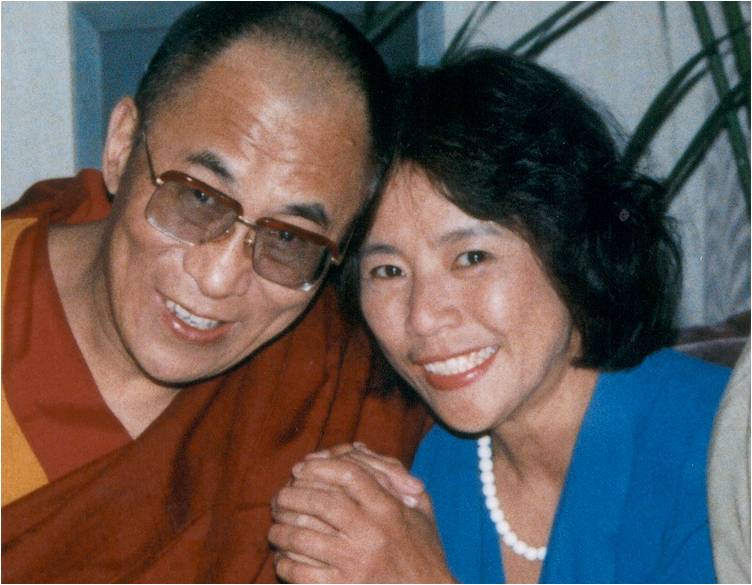 Manjushree Orphanage, she explained to us, is in the village of Tawang, located at the foot of the Himalayas where there has long been a border dispute between China and India. The monastery and orphanage sits at the most north-eastern region of India, sharing the border with Bhutan on its west and Myanmar on its east. Over 10,000 feet above sea level, it is situated where winter is long and severe and summer has a three month-long rainy season. 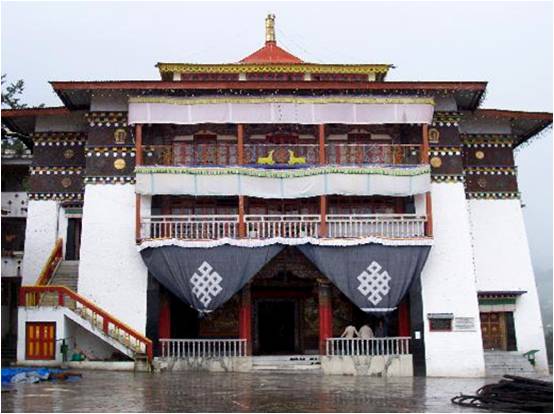 The Tibetan Buddhist monetary located in Tawang, at the foot of the Himalayas.Photo courtesy of Dr. Kazuko Tatsumura.

Dr. Kazuko explained why she was so enthralled with her mission:

Nature in Tawang is very beautiful. The land is full of deep forests and high, snow-capped mountains with a great river running through it.

This area is very rich in the culture of Tibetan Buddhism. It carries special significance as the birthplace of His Holiness the 6th Dalai Lama and home to one of the most important Tibetan Buddhist monasteries in the world. Thousands of Tibetans now reside there.

Tawang is the place where His Holiness the 14th Dalai Lama - today's Dalia Lama - first found refuge after fleeing Tibet in 1959. He stayed there for a while before he settled down in Dharamsala. The monastery in Tawang honors the great 5th Dalai Lama and has old things such as Buddhist sutras written in pure gold.

There is a wondrous story about Tawang. When 6th Dalai Lama left his house where he was born, he planted a tree at the garden and said, "I will come back when this tree grows as tall above the roof of the house." When the 14th Dalai Lama was exiled and got to Tawang, this tree had just gotten above the roof! 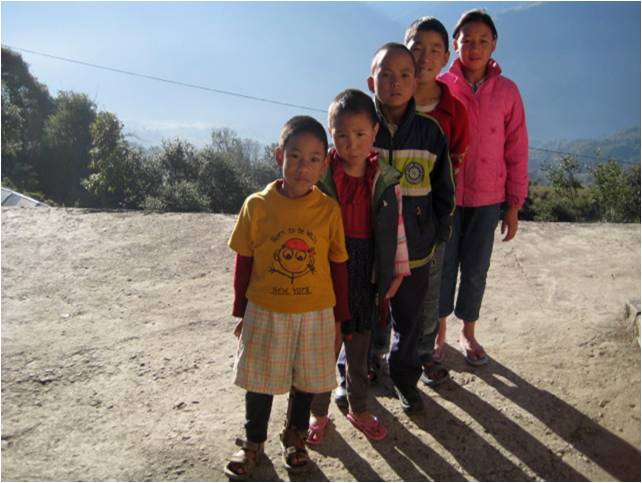 Dr. Kazuko explained to me about the Tibetans in Tawang:

They are the poorest of all the Tibetans living in India and their health conditions are not good, with many contagious diseases. Many suffer from tuberculosis that medicines don't cure well. His Holiness the Dalai Lama is very much concerned about this and recently helped to build a new hospital there. 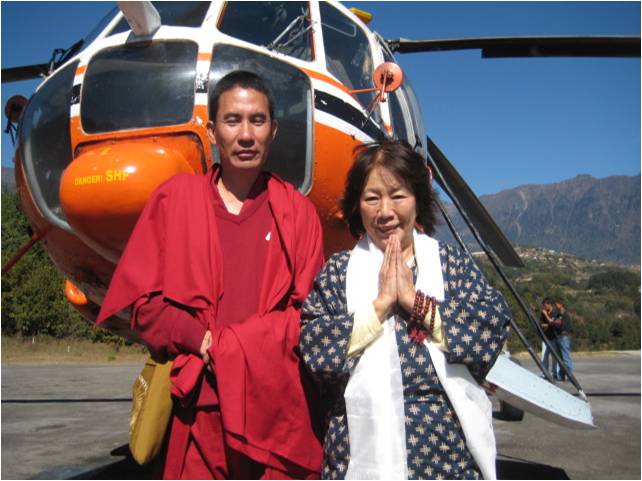 In 1998, the young Tibetan monk named Lama Thupten Phuntsok founded the Manjushree Orphanage. It was established with 17 children and as now has 180. The Dalai Lama thinks it is imperative to have a new and bigger school building for them. This is Dr. Kazuko's task: to raise funds in the U.S. and Japan to implement the Tibetan-designed school at a cost of $360,000. 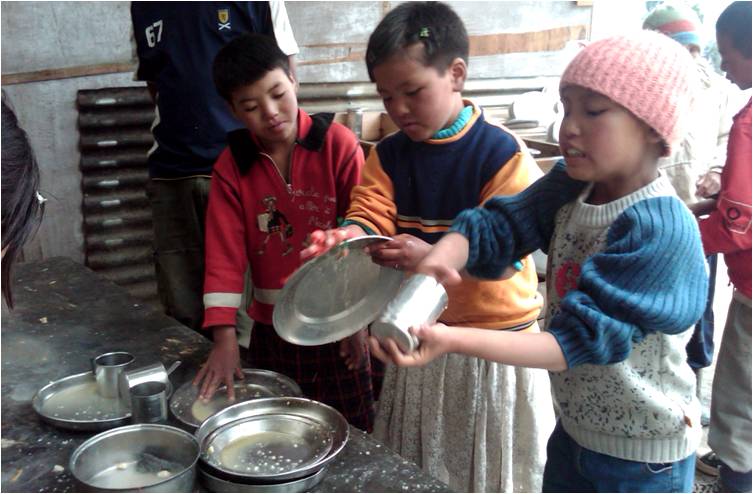 The children learn responsibilities such as carefully washing the dishes after every meal.Photo courtesy of Dr. Kazuko Tatsumura.

Dr. Kazuko's first trip to the Manjushree Orphanage in Tawang was memorable:

I got on the airplane to Delhi by myself. I arrived there late at night, and then went to domestic airport by bus, where I flew to Guwahati. At Guwahati, I was told that I had to drive over the rugged mountains for three days. I decided to charter a helicopter instead. Helicopter service is dependent on good weather - fortunately it was nice weather.

I flew in the sky over Bhutan, enjoying the beautiful scenery. I flew beside the Himalayan Mountains, and at last arrived at Tawang in the afternoon. I felt very cold up in the mountains, and was dizzy due to the high altitude.

Lama Thupten Phuntsok came to greet me. I was wrapped with a long white kata and I arrived at the orphanage an hour later. Surprisingly, lots of children ran to me and held me. This blew away all my fatigue from the long trip. I went to take a short nap, but slept tight until the next morning.

The next 14 days became one of my happiest memories in my life. 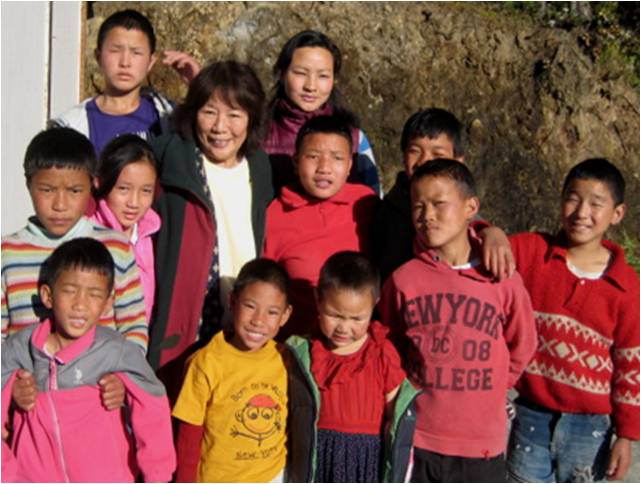 Dr. Kazuko with 11 Tibetan orphan children who she sponsors. Each of these children suffered TB last year, but have now been healed through her therapy. See GaiaHolistic.com.Photo courtesy of Dr. Kazuko Tatsumura.

This Japanese-American physician related her memories to me:

At the 5:30 in the morning on my first day, I woke up with the voice of children chanting. I saw all of them sitting neatly and chanting, aloud and lively, in front of Lama Phuntsok. I was invited to sit down next to Lama Phuntsok, and started chanting Sutra by imitating the 150 children.

Those were very, very cute faces I saw. I couldn't stop my tears as I watched those children, their eyes closed in prayer for the Dalai Lama's longevity and the realization of this hope. I felt exactly like I was watching many little Buddhas - some with running noses.

The reason Dr. Kazuko is so emotionally attached to these children and determined to build their school is the enormous bond she feels with them:

I lived with these wonderful children for two weeks. Much to my surprise, they never fight among themselves despite the small space where they are living all together. Not only don't they fight, but they also don't even raise loud voices at one another. They share everything and help each other.

They try to help with anything. They lead each other by taking each other's hands. It was completely surprising to me. How could it be possible? I cannot imagine this happening in another place. I came to help those children, but I feel I was helped by them.

Who are these wondrous children? They are orphans without father and mother, some disabled. Despite that, they have a mind to help others, compassion, cooperation, patience, with a lack of greed and jealously. Everyone is really happy. It seems like they have found happiness in helping others. They have so many things I could learn. I was full of tears of appreciation for them every day.

Actor Richard Gere and Dr. Robert Thurman, a professor at Columbia University and father of Uma, founded Tibet House in New York along with His Holiness the Dalai Lama. I had met Bob at the Christie's auction and asked him about Dr. Kazuko's daunting challenge -- and importance -- to raise funds for a school in this economy. Bob told me:

It is wonderful what Kazuko is doing for those orphaned children, and Tibet House U.S. is pleased to be helping with the project to build a proper school for them. She is exemplifying what His Holiness calls "Universal Responsibility," by adopting all those lovely kids.

Like Shangri La, Tawang seems to Kazuko a happy land, isolated from the world.Photo courtesy of Soumyanath.

Dr. Kazuko says she is frequently asked, "There are so many orphans in the world - Why Tibetan Children?" She responds:

In my over 70 years of life, I have traveled over 135 countries in the world, seen much and met countless beautiful people and wonderful children. But I must say this strongly, 'Tibetan people are unique, and Tibetan culture is unique and we must preserve them both, if the what they have naturally can be further cultivated and nurtured in a right environment.'

I think, just like Mozart was born to compose without being taught how to, these Tibetan Children are born with compassion in their DNA. They tend to think naturally to put 'others before self.' In this day and age, how is this possible? Maybe because Tibetans are all reincarnations of those with this tradition long, long before? Maybe because it is in their Genes? Or maybe it is due to their mothers' early attitude and behavior?

Seeing compassionate behavior on the part of three years olds at Manjushree Orphanage, I was totally puzzled. When I asked Lama Thupten about this he said, "I don't know myself, because I have not taught them yet." But they definitely possess this unique character of compassion for others: Om Mani Padme Hum.

When His Holiness the Dalai Lama says, "We must preserve Tibetan Culture," I think people in general don't fully understand. He means cultural spirituality. You can learn and preserve painting, dance, music, and food traditions - but these are at the most mundane level. The transcendental aspect of culture is the one the Dalai Lama is talking about.

In this busy world with full of greed and selfishness - this 'Me First' environment in which we live - Tibetans' spiritual culture is unique. Tibetans seem to find happiness in practicing 'Others before self.' I believe we need balance on this planet, and Tibetans can give us this equilibrium. I think this is what I saw in the children of Manjushree Orphanage. I want to help these children learn and grow, giving influence to the world.

Convinced of her sincerity and understanding of the plight of children in Tawang, my partner John Lee and I decided to assist Dr. Kazuko. After she showed us her letter from the orphanage director, Lama Thupten Phuntsok, authorizing her to raise funds for the construction of a new school for his orphanage, John and I agreed to help her. John specifically said he would cook a dinner for 18 of her friends on Feb. 24 if they would contribute generously towards the school's construction. Tibet House U.S. has agreed to serve as fiscal sponsor in the U.S. for contributions. This is the first joint project between the U.S. and Japan Tibet House, under the auspices of the Office of the Dalai Lama in Japan.

Did I mention that Dr. Kazuko is as connected as she is compassionate? Rocky Aoki's wife Keiko, CEO of Benihana, has agreed to host John's dinner at her gorgeous Manhattan home on February 24 and we are inviting the most caring and giving people we know to attend. If you wrote John a note, he might be able to save you a seat.

As 2010 ends, there are so many bad things we could remember. But I chose to focus on thought leaders and global leaders like Richard Gere and Dr. Robert Thurman. Like Keiko Aoki. Like Dr. Kazuko Tatsumura. Help them connect goodness for the Tibetan children of Manjushree Orphanage in the village of Tawang. As founder of Orphans International Worldwide (OIWW), I will do what I can to help. Join us for dinner February 24!