Rabuhos ― or love hotels ― sprinkled throughout Japan’s cities and small villages alike, serve a simple purpose: offering couples a space to have sex. Often adorned with mirrored ceilings, rock-walled jacuzzis, and other campy displays of desire, the spaces serve as destinations for unbridled eroticism in a country where societal norms can inhibit such encounters.

In 2015, Vice published an article called “Why Aren’t the Japanese Fucking?” which explored the “celibacy syndrome” afflicting Japanese youth. The piece explored some of the interrelated factors contributing to the documented decline in sexual contact in Japan ― including rising housing prices, pressuring 20- and 30-somethings to live with their parents; overpopulation, preventing any semblance of privacy; gender inequality; and predominate social norms privileging modesty and chastity.

For many couples, these love hotels offer what the real world lacks: seclusion, lack of judgment or societal shame, and the kitschy accoutrements of authentic romantic fantasy. The first such establishment emerged in the 1960s, when privacy first became a prevalent issue. There are now approximately 37,000 rabuhos throughout the country.

Belgian photographer Zaza Bertrand was intrigued by these spaces, at once rooted in reality and make-believe, characterized by both intimacy and alienation. She documented the surreal spaces for a series called “Japanese Whispers.”

“It really struck me that these places are everywhere,” Bertrand explained to The Huffington Post. “It is a huge industry and all kinds of people use them. Yet everything is very private and kept secret.” As Bertrand elaborated, there are carefully concealed parking spots so visitors’ license plates won’t be visible to the outside world. Also, the entire hotel is automated, so there are no personnel on the premises, taking the concept of privacy to an almost surreal degree.

To find her subjects, Bertrand posted ads on the internet. “I randomly looked for couples to portray in a hotel of their choice,” she explained to The Guardian. “A man and his wife, an extramarital couple, call girls, swingers, young people with no other place to go to ... Everybody finds their way to the love hotels.”

Bertrand offered to fund a couple’s stay in exchange for photographing what unfolded during it. However, Bertrand wasn’t interested in the act of sex itself, but rather the choreography leading up to it, the tension-laden intricacies that invade a room specifically ordained for making love.

“The experience was entirely between my models and me,” Bertrand continued. “After arriving at the hotel lobby, we selected one of the rooms on a screen together and took the elevator up. What happened next was entirely depending on the vibe I had with my models. Every shoot was very different. Never was anything planned or set up up front.”

The resulting images combine genuine passion with glaringly unnatural settings ― made all the more abnormal by the presence of a photographer documenting the scene. Bertrand’s photos capture couples creeping toward the act of intimacy, their gestures palpably a bit off-key.

The photography book Japanese Whispers is published by Art Paper Editions. An exhibition of the photos is currently on view at the Riot gallery in Ghent as well as IBASHO Gallery in Antwerp, Belgium. 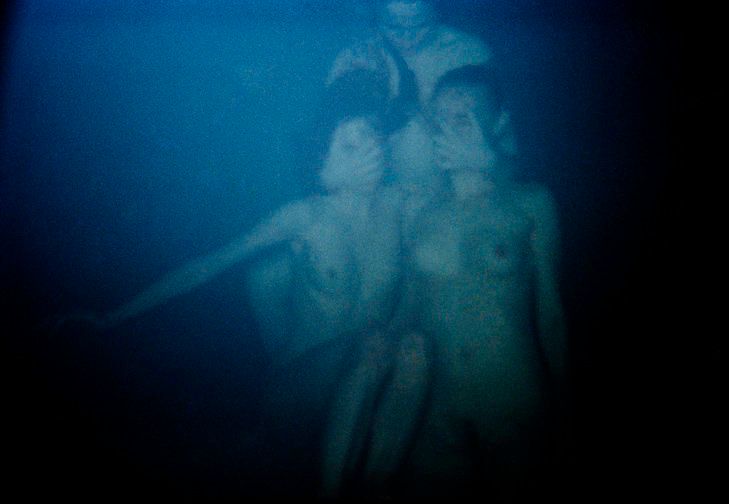