On September 1, Japan recommenced the ruthless 'War Against Nature' and the dolphins. It's brutal, vile and shocking. It's an insatiable bloodlust that's driven by a disgusting sense of entitlement and illicit, obscene profits. Scientists have documented these atrocities and reported that dolphins experience the highest level of pain, trauma, and distress.

Join me for another segment of SOS as I show you the shameful ecocide taking place in the Taiji Cove, Japan. 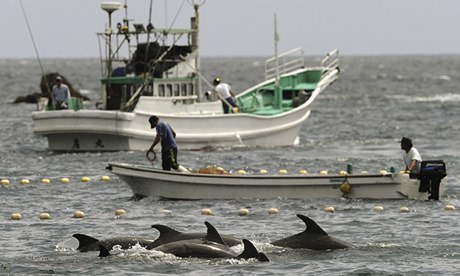 It's time to end the Taiji drive-hunting -- It's evil. The dolphins, by the way, are laced with toxicity, unsafe for human consumption. Photo credit: the guardian.com

These deranged bloodbaths begin by lowering metal poles into the sea and banging them incessantly. These awful noises frighten dolphins and disrupt their ability to communicate amongst the pod. 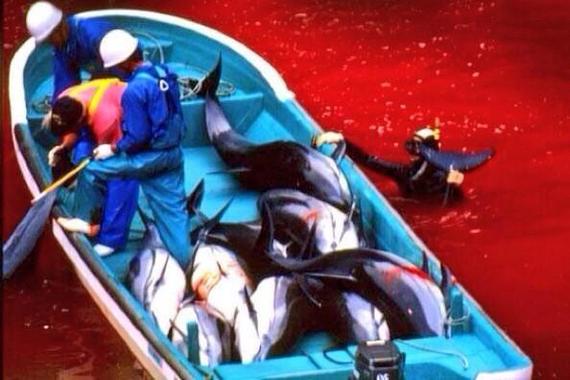 Anxious dolphins are herded into the narrow Taiji Cove where sociopathic ocean-killers savagely attack them with daggers. Photo credit: bps.twitmag.com 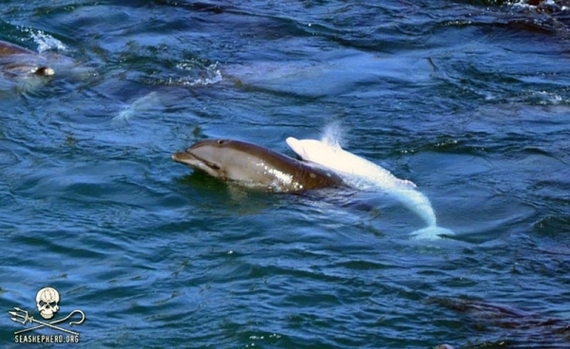 The best looking dolphins are isolated from the pod and sold as slaves to dolphinariums. These magnificent sentient creatures are penned-up, drugged and electrocuted into submission. They are sentenced to a miserable existence, entertaining crass consumers.

In 2013, Japan sold 158 dolphins into slavery, at an average price of $140,000; that's over $22 million from animal kidnapping and extreme cruelty. Moreover, organized crime is profiting from this loathsome cetacean slavery industry. 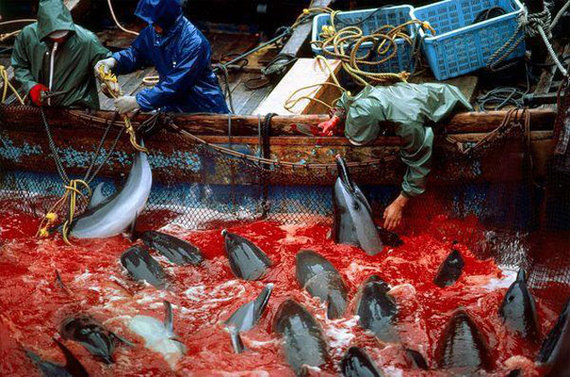 This unconscionable cruelty is unacceptable! Photo credit: the inertia.com

The oceans and all sealife, in fact, belong to the commons. Japan is plundering the ocean, and because they are currently an economic superpower all other nations are turning a blind eye. That's why Sea Shepherd Conservation Society is involved, there's no worldwide government agency upholding international laws and protecting sealife. Biodiversity in the ocean is being significantly diminished, globally. The strength of the ocean depends upon the abundance of biodiversity, which is all interconnected. Prolonged looting is quickly killing Earth's oceans -- our life support system. And as Captain Paul Watson, the founder of Sea Shepherd, correctly says "If the oceans die, we die."

Dolphins are 'Doctors of the Sea' they keep populations of their prey fit by culling the old and weak. Dolphins prevent diseases from becoming epidemics.

It's time to end this senseless ecocide and protect the 'Doctors of the Sea.'

An intrepid Australian conservationist, Sarah Lucas, founded Australia for Dolphins. Lucas is seeking seven million yen in damages over claims that she and her father were "rudely and aggressively escorted" from the Taiji Whale Museum in February of 2013. 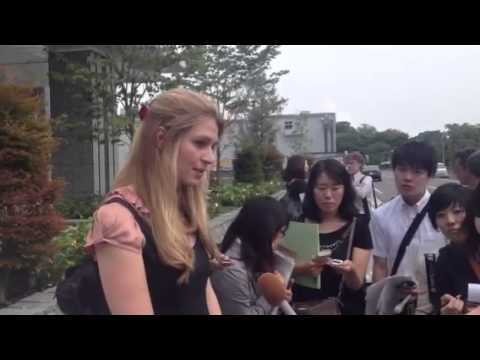 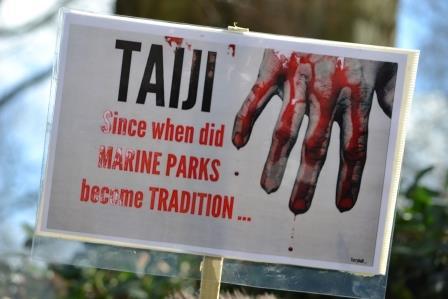 Dolphins from Taiji are kidnapped, tortured and sold as slaves to dolphinariums, and its bloody wrong. Photo credit: careforthewild.com


Please, say "NO" to purchasing any tickets for dolphinariums.