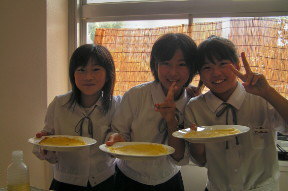 One upping the slightly disingenuous French Women Don't Get Fat, The latest incarnation in the Healthier Than Thou diet-book genre is Japanese Women Don't Get Old or Fat by Naomi Moriyama. In it, Moriyama attempts to discover the secrets to the Japanese peoples' super low obesity rate -- 3%, the lowest in the industrialized world -- and their fabled long lives - 85 years, the highest life expectancy -- by dissecting her mother's kitchen. The book has it's good points (simple cooking) and it's moments of over-the-top rhapsodizing but what interests me is how people who are not Japanese take this advice. To find out, I interviewed three Americans who lived in Japan.

1. No Walking Lunches. Jennie Berglund, a middle school teacher from Minnesota who spent 12 days in Izumi City on an exchange program notes, "It is rude to eat, drink and smoke on the street or while walking. That isn't how food is to be treated." Dr. Thomas Hilton, a university professor at the University of Wisconsin -- Eau Claire who lived in rural Kyushu for two years, adds, "You never saw someone walking and eating or eating in a car. It was considered the height of impropriety. If you were going to eat, you sat down."2. Eat Simply. One of the main takeaway tips from the book, this fact was brought up in all of my interviews. Fish, rice, veggies, fruit, tea and soy are the main staples. Grant Sunada, who holds a Masters of Public Health and lived in Japan for three years and has visited several times, says, "You might say that the Japanese diet is high in complex carbs and salt -- rice and soy sauce! How that contributes to narrow waistlines, I'm not sure. But fish and veggies are very common (and tasty too) so maybe that helps." Berglund noted that while American fast food seems to have taken off all over the world, the Japanese students they stayed with enjoyed it but didn't eat much of it. Berglund describes a typical breakfast as, "lettuce, a sliced tomato, tea, small serving of yogurt with these interesting vitamin jell-o like cube in it, 1 egg, whole wheat toast. Lunch was often times soup, always white rice, little packets of dried fish (looked like minnows with heads still attached in a saltine packet) and, milk."3. Power Walk. Whether in the large cities like Sunada and Berglund or a rural area like Hilton, the Japanese spend a good portion of their time walking. Sunada says, "In Japan, people rarely drive, so that makes them more active than the average American. Most walk, ride bikes, drive a scooter, or take mass transit." In addition to walking, Hilton points out that especially the poorer Japanese are hardy by nature as they have to withstand the elements. "The people lived in houses made from a bamboo lattice, smeared with mud then whitewashed with paper windows and doors. No central heating or a/c. Even when they were inside, they were not separated from the elements much. In the winter, the way they kept warm was they sat at a low table with a koutatsu -- a cylinder holding lit charcoal -- under the table. Then you'd put a quilt over the table. The people had to be hardy. "4. Food is Fuel. "Japanese people view their food strictly as a source of energy. My host parents mentioned that many times! They view food as a necessity for healthy living and treat meals as sacred TV off time periods. It is a Japanese love affair with food versus an American wham-bam-thank you-ma'am with food," says Berglund. Hilton adds that cleanliness and a beautiful presentation were also of utmost importance to even the poorest Japanese.

While all three noticed an increase in their energy and general health while living in Japan, when asked if they had incorporated any of the good Japanese habits into their American lifestyles, the general consensus was no. While Sunada claims a penchant for Japanese food when he eats out here, Hilton sums up his experience with, "I suppose I still prefer a firm mattress."

Was there anything the Americans thought was unhealthy? Sunada points out, "The men are workaholics, traditionally speaking." Berglund noted that the number of people smoking was "off the charts." Hilton added that for many poorer Japanese it can be difficult to eat a properly balanced meal as food there is very expensive.

While the traditional Japanese diet may reign supreme, in a stroke of supreme irony, the people that may be the least healthy of all are Japanese who move to America. A recent study showed that Japanese men who switched to a western diet had higher rates of obesity and type II diabetes than both their traditional-diet Japanese counterparts and their western-food eating American neighbors.

And the premise of the book? Are Japanese women really that thin? In their experience, yes. Berglund hypothesizes it's all about the chopsticks. "Eating with chopsticks is a great diet plan. If nothing else, it forces you to eat slower." 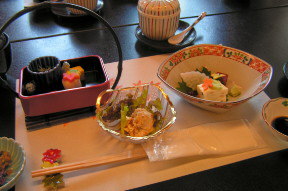 Have any of you lived in Japan? What's your experience?