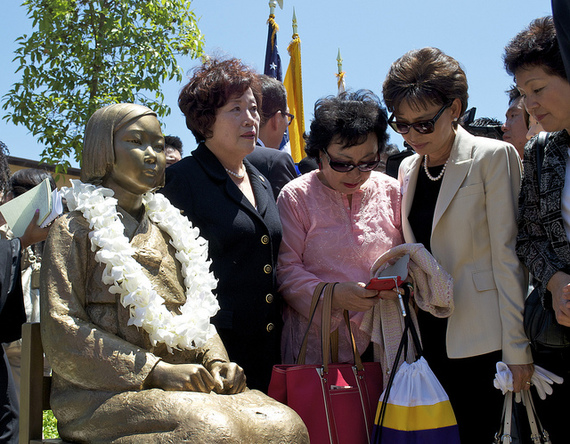 Japan's most recent and controversial apology to the government of South Korea for sexual slavery committed by its military against "comfort women" during WWII has raised important questions about apologies for crimes and serious human rights violations during armed conflict. What is the proper role of an apology for such massive crimes against humanity? What can apologies do and what should they not be meant to do for survivors and victims?

The latest Japanese apology, which some have seen as part of a strategic geopolitical deal struck between Japan and South Korea, has led to protests among the 46 surviving South Korean victims as well as the victims in other countries occupied by Japan during the war.

After working for 15 years on reparations for victims in over 50 countries, ICTJ has found that many victims feel that an apology unaccompanied by other forms of reparation does not constitute justice, even as material reparations, such as compensation, without a meaningful acknowledgement of responsibility also falls short.

An estimated 200,000 women in Asia were forced into sexual slavery by the Japanese Imperial Army just prior to and during World War II. Japan systematically established an extensive network of "comfort stations" throughout its occupied territories, to which "comfort women" were trafficked and used as sexual slaves. Many of these "comfort women" were barely teenagers when they were enslaved and the surviving few are now of very advanced age and dwindling in numbers.

Various expressions of regret and statements acknowledging the role of the Japanese military in operating the "comfort women" system have been made by different Japanese government officials, but none, including the latest apology, has expressed an unconditional acknowledgment that the Japan as a state was responsible for these violations.

As part of the latest "apology," Japan pledged 1 billion yen ($8.3M) for the creation of a South Korean foundation to support the surviving South Korean victims with medical, nursing, and other support services. South Korea, in turn, pledged to "irreversibly" drop its demand for reparation, end all criticism of Japan on the issue, and remove a memorial constructed by Korean "comfort women" survivors in 2011 in front of Japan's embassy in Seoul.

Rather than fully acknowledge the state's responsibility for initiating the system of "comfort stations" (or brothels) the agreement offers a "heartfelt apology and remorse" but only for the "involvement of Japanese military authorities" in forcing South Korean women into sexual slavery. According to survivors and their advocates, this falls well short of a complete and meaningful apology. It does not recognize Japan's role in establishing and maintaining the system of sexual slavery. It does not accept legal responsibility for the violations. It fails to meet criteria set out in international human rights norms that a public apology must be an "acknowledgement of the facts and acceptance of responsibility."

In a recent report by the International Center for Transitional Justice, "More Than Words: Apologies as a Form of Reparation," we explain that the most meaningful public apologies clearly acknowledge responsibility for the violations and recognize the continuing pain of survivors and victims' families.

As the report points out, apologies for massive and systematic war crimes and human rights violations should come as a result of consultations with survivors and victims' families about the form, content and timing of an apology that would be most meaningful for them.

This was not the case for Japan and South Korea's "comfort women" survivors. This is certainly not the case for all other survivors across Asia that are not covered by the agreement between the Japanese Prime Minister and South Korean President. Instead, this attempt at an apology appears to have come about through the encouragement of the United States. It was motivated less, if at all, by a desire to render justice to comfort women but by a need to ease tensions between Japan and South Korea (including over territorial disputes and unresolved historical grievances).

The ICTJ report emphasizes that apologies should not end truth seeking nor stifle truth telling by victims. Instead, an apology should encourage a collective reckoning by society of conflict-related crimes or human rights violations carried out in the name of the state. An apology should open up space for accountability rather than close it.

Certainly, apologies should not be used to remove or devalue measures, such as memorials and monuments--especially those established by victims themselves -- to ensure that violations are not forgotten. Memorials built by victims that are strongly supported by society are not for the government of the day, let alone a foreign government responsible for war crimes, to remove. That only adds grave insult to irreparable injury.

Apologies, too, should not discriminate among victims of the same violations. Indeed, Japan's failure to mention the women victims of its "comfort stations" in China, the Philippines, Timor-Leste, and other Asian countries supports the view that the apology was motivated primarily by political expediency rather than a genuine admission of past wrongdoing. By effectively discriminating against some victims, the gesture fulfills neither the spirit nor purpose of an official apology. 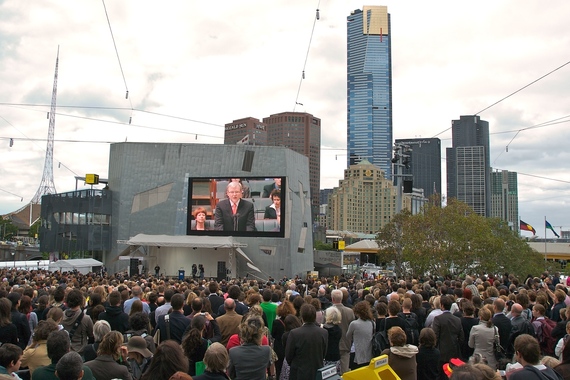 Finally, apologies should not be instrumentalized for other purposes that are inconsistent with the "never again" promise that such apologies are meant to signal and symbolize. Here, the apology for past crimes arguably does not reduce present regional security tensions--and may even escalate them. This not only diminishes its significance but turns the apology on its head by devaluing the victims' decades-long demands for justice.

Japan could learn from some recent examples of apologies for violations committed during occupation as part of reparations programs that accompanied a state's unequivocal acknowledgement of responsibility. The UK government apologized in 2013 for the torture and abuse of Kenyans suspected of supporting an anti-colonial movement against British colonial rule in Kenya. The UK funded a memorial and paid compensation to survivors, alongside the apology. In 1991, President Patricio Aylwin of Chile apologized on behalf of the state for violations committed by the Pinochet dictatorship. He made it clear that the state was responsible for the violations and that state agents had committed enforced disappearances, torture, and extrajudicial killings. He followed up the apology by presenting a draft law to congress creating a reparations program and an institution to implement it -- which was enacted and continues to provide support to victims to this day.

The Japanese government has played a constructive role in promoting reparations as an element of transitional justice in the Rome Treaty that created the International Criminal Court. In 2014, it made a significant financial contribution to the Trust Fund for Victims that was created by the treaty as its reparations mechanism. Japan even asked that the donation be "earmarked for victims of sexual and gender based violence." In other words, despite political, diplomatic and security challenges that have marked Japan's refusal and reluctance to apologize to the "comfort women," it has shown that it recognizes the importance not only of addressing sexual and gender-based violence in armed conflict but the need for reparations to be made to victims.

The United Nations and national governments should now step in and ask Japan, after so many years, to unequivocally acknowledge its responsibility to "comfort women" for past sexual slavery crimes with a full and meaningful apology coupled with effective reparations.