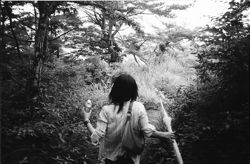 At the northwest foot of Mount Fuji lies a dense forest steeped in legend, called Aokigahara or Jukai, the "sea of trees." Upon entering the forest, one immediately notices the stillness -- the wind is blocked both by the thick foliage and the surrounding mountains. The bed of the woods is volcanic rock covered with gnarled roots. Underground, icy caverns snake through the stone, formed by Mt. Fuji lava flows many years ago. Some of these, such as the Narusawa Ice Cave and the Fugaku Wind Cave, have become tourist destinations.

The sea of trees is also believed to have been a place where ubasute was practiced in the past. Ubasute literally means, "the abandoning of an elderly women" and refers to the act, usually in times of famine, of carrying an elderly family member to a mountainside or some other remote place and leaving him or her to die of exposure.

Legend has it that this was often carried out due to feudal officials' decrees, although the evidence for this actually having been common is shaky at best. Nevertheless, ubasute has become of the stuff of Japanese folklore. The most popular story, Ubasuteyama, tells of an elderly mother carried by her son to a mountainside. Although soon to be left to die, she breaks branches along the way to leave a path for him, ensuring his safe return to the village. This story therefore serves to instill in Japanese youngsters a sense of respect for their elders, who selflessly care for the rising generations regardless of their own treatment or circumstances.

The dark, mythical past of Aokigahara extends to the present. Since the 1950s the woods have become a common place for Japanese salarymen, or corporate workers, to end their lives. Second worldwide only to the Golden Gate Bridge as a suicide destination, dozens of bodies are found in the woods each year. The entrances to the forest are peppered with signs beseeching the would-be suicides to reconsider. Some spiritualist believe that the past and present tragedies have permeated the space, creating a paranormal wood that is hard to escape. The scientific corollary for this is that due to magnetic iron deposits in the forest's volcanic soil, compasses are unreliable.

But darker qualities aside, Aokigahara is a hauntingly beautiful place. The caves, whose

temperature constantly stays a few degrees above freezing, are a welcome respite from the muggy forest, especially during the summer months. Other attractions are nearby, all easily accessible by bus from Tokyo. Besides Mount Fuji itself, Lake Kawaguchi lies to the northeast. From the town of Fujikawaguchiko on the lake's edge a ropeway extends to the top of Mount Tenjo. The numerous forest paths on the top of the mountain offer fantastic views of Mount Fuji, as well as the surrounding countryside.