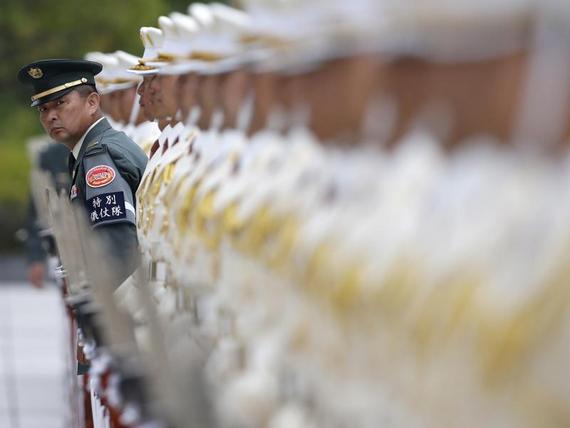 In 2004, Japanese Prime Minister Shinzo Abe made a case for Japan to restore its military capabilities, writing in his book, Determination to Protect This Country, that "if Japanese don't shed blood, we cannot have an equal relationship with America." Since then, Abe has sought to revive the country's defensive capabilities, mostly toward fortifying its claim over the disputed Senkaku/Diaoyu Islands, an island chain in the East China Sea that Beijing says belongs to China. He has requested a record five trillion yen ($42 billion) defense budget for fiscal year 2016 (if approved, it will be Tokyo's largest in 14 years) and reinterpreted the constitution to allow Japan to exercise the right of collective self-defense. The efforts have provoked growing alarm.

A June 2015 survey found that 57 percent of South Koreans believe that Japan is in a "militaristic state," and 58 percent said that Tokyo poses a military threat. In comparison, only 38 percent surveyed thought that China was the bigger threat. China, too, is worried. It has repeatedly warned that Abe is leading the country "down a more dangerous path toward militarization."

Whatever Abe's intentions, however, Japanese militarism was buried for good in August 1945 and will not likely rise again. The reason: the Japanese people.

After the atomic bombings of Hiroshima and Nagasaki, Emperor Showa, popularly known as Hirohito, gave a radio address explaining to his people that continuing the fight against the Allies would "result in an ultimate collapse and obliteration of the Japanese nation."

And so Japan surrendered. Unlike the Germans, though, the Japanese people had no Adolf Hitler or Nazi Party to blame for a war that had killed at least 2.7 million Japanese servicemen and civilians and destroyed 66 major cities. Although the Japanese emperor had been accused of overseeing war crimes -- mass rapes and killings in China and Southeast Asia -- U.S. General Douglas MacArthur thought it politically expedient to keep him in power and successfully ran a campaign to exonerate Hirohito. The Japanese people came to regard Hirohito as innocent and subsequently turned against the military, accusing the services of deceiving them and drawing the country into a perilous war. Japanese police reports immediately after the surrender note the people's "grave distrust, frustration, and antipathy toward military and civilian leaders" and general "hatred of the military."

Civilian contempt for the military quickly spread to the rank and file of the 3.5 million-strong Imperial Japanese Army. And so, after the war, Japanese soldiers were both defeated and despised. In a letter from an anonymous former soldier dated May 9, 1946, "Not a single person gave me a kind word. Rather, they cast hostile glances my way." Military uniforms were nicknamed "defeat suits," and military boots were called "defeat shoes."

The Tokyo War Crimes Trials, which lasted from 1946 to 1948, revealed the extent of the atrocities committed by the Japanese military during World War II and also the extreme antipathy that the Japanese people felt for the military. For example, during the 1945 Battle of Manila, the Japanese military mutilated and massacred between 100,000 and 500,000 Filipino civilians. Shortly after the news reached Tokyo, a Japanese woman wrote a letter to the Japanese national paper Asahi Shimbun expressing her revulsion. "Even if such an atrocious soldier were my son," she wrote, "I could not accept him back home. Let him be shot to death there." The poet Saeki Jinzaburo also penned a few lines expressing his disgust with the army after the war crimes revelations: "Seizing married women, raping mothers in front of their children--this is the Imperial Army."

In 1947, a Japanese poetry magazine published the following verse after the end of the Tokyo tribunal: "The crimes of Japanese soldiers, who committed unspeakable atrocities in Nanking [China] and Manila, must be atoned for." Former Prime Minister Hideki Tojo, an army general, was openly ridiculed for a botched suicide attempt in September 1945. One Japanese novelist and poet, Takami Yoshio (who went by the pen name Jun Takami), wrote at the time, "Cowardly living on, and then using a pistol like a foreigner, failing to die. Japanese cannot help but smile bitterly. . . . Why did General Tojo not use a Japanese sword as Army Minister Anami did?" These postwar sentiments against the military were so strong that even textbooks during that period systematically skipped over any references to past Japanese victories and military heroes. And they remain absent from schoolbooks to this day.

Distrust and ridicule of all things military did not abate in the postwar years. After the war, the Self-Defense Forces (SDF), Japan's de facto postwar army created at the behest of the United States, were generally accepted. In the 1960s, though, new recruits were occasionally pelted with stones while walking down the street, and when they appeared in public spaces, people would get up and leave. Throughout the Cold War, Japan's military was seen as serving no real purpose and offering little protection. Then, as now, the public felt that the U.S.-Japanese security treaty offered a better guarantee of security than the SDF. After all, since its founding, the SDF had neither achieved a single military victory nor ever engaged in combat operations.

Although the end of the Cold War brought a new raison d'être to the SDF -- UN Peacekeeping operations -- the Japanese still regard the force as useful primarily for disaster relief rather than defense. According to a 2015 public opinion poll conducted by Japan's Cabinet Office, 82 percent of Japanese think that the SDF's primary role is disaster relief, and 72.3 percent believe that this should remain its main duty in the future. Perhaps that is why, to this day, the SDF refers to its weapons as "equipment" and artillery brigades as "technical brigades" in order to downplay the military aspects of Japan's armed forces. Tanks even used to be called "special vehicles," although they are now referred to as tanks again.

In the same poll, 92 percent of those surveyed had a "positive impression" of the SDF, but a positive impression does not mean support or approval. According to Thomas Berger, a professor of international relations at Boston University, "Japan's best and brightest do not flock to join the armed forces, and the SDF is hardly celebrated in Japanese society." Indeed, according to the same 2015 public opinion poll, less than half of people questioned thought that being a soldier was a respectable occupation, and only 25.4 percent perceived the job to be a challenging one. As Berger explained to me, "Internal [SDF] surveys showed that the majority joined the forces because they hoped for material betterment. It is a safe, reliable job, and the legal status is the same as being a post office clerk."

The SDF also has the reputation of being a holding center for high school and college dropouts. It recruits heavily from Japan's backwaters, such as southern Kyushu and northern Honshu--and especially from Akita prefecture and Hokaido, where young people face limited job prospects. Most of those enlisted belong to the lower and lower middle classes, although the officer corps is staffed primarily by those from the middle class. Once these young men and women have joined, they tend to serve until quiet retirement in their early 50s. "Japan doesn't have the sort of 'hero worship' of military things that can boost the career of a retired officer," according to Robert Dujarric, director of the Institute of Contemporary Asian Studies at Temple University in Japan.

That is why the Japanese have resisted Abe's attempts to revive the military. In August 2015, in one of the largest demonstrations in Tokyo against Abe, tens of thousands hit the street. One protester told the Financial Times, "This is the last chance we have to preserve Japan's worldwide reputation as a country of peace." In reality, however, Japanese military radicalization could be triggered only by a fundamental change in the security architecture of East Asia, such as a unilateral U.S. withdrawal from Japan or a North Korean nuclear missile attack. Both are far-fetched scenarios.

But given the current political climate, it was not surprising that an August 2015 public poll found only 11 percent of the Japanese were supportive of Abe's policy to reinterpret the power that the constitution gives its military. His personal ratings have also slipped, with some analysts predicting his resignation.

The moral and military defeat of the Japanese army in World War II was so total that it echoes to this day. Despite Abe's historical revisionism and fearmongering, the Japanese public appears unwilling to trust another military clique. That's why, for all the talk of Japanese militarism, a relatively pacifist country is here to stay.

This article has previously been published in Foreign Affairs Magazine.