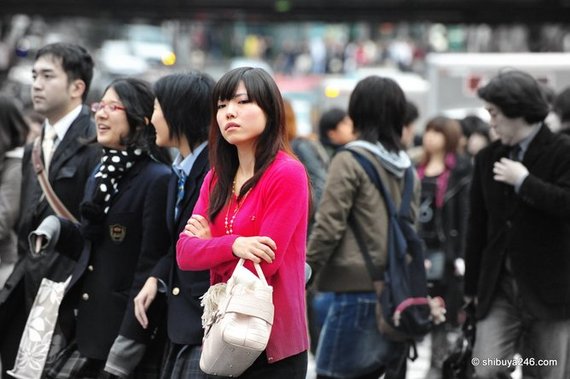 Three women have in recent months been appointed to politically powerful positions in Japan. But even as seeing women in positions of power becomes less unusual in the country, gender parity is a long way off.

Renho Murata (commonly known as Renho) is the new leader of the opposition Democratic Party; Koike Yuriko beat her two male competitors to become Tokyo's first female governor; and Japan's Ministry of Defense is, for only the second time, being led by a woman -- Inada Tomomi (Koike Yuriko was defense minister from July to August 2007).

The appointment of the these women to leadership positions suggests a shift in the role and status of women in Japanese politics, and in society more generally. And some have wondered if the surge means that a woman prime minister could be around the corner. But this is no revolution.

There's an increasing sense of embarrassment among Japanese political leaders about the nation's position in global rankings of female political and economic empowerment.

Women heads of state have emerged in several G8 countries and also in neighbouring countries, such as South Korea and Taiwan. Japan, by contrast, has the lowest proportion of women in its national legislative assembly among OECD countries; only 9.3% of Lower House seats are occupied by women.

The nation also has the second largest gender pay gap, after South Korea. Women comprise less than 2% of the nation's mayors, less than 10% of company heads and only 18% of court judges.

For a country that's so advanced in other human development indices, such as health and life expectancy, these statistics paint a troubling picture of enduring gender inequality.

The fact that Koike, Renho and Inada have reached positions of political leadership is a positive sign of change. It is also symbolically significant for Japanese women and representative democracy. But do they herald the beginning of a feminist political utopia in Japan? A glimpse of their backgrounds and motivations may give us a hint.

Tokyo's first female governor Koike Yuriko's political background is in national politics. Before throwing her hat in the ring for the office of Tokyo governor, she was a member of the long-ruling government party, the Liberal Democratic Party, and had a seat in the national legislative assembly.

She was influential in the preparation of policies to better utilise women's labour largely as a strategy of improving the economy, so her commitment to "women's empowerment" is unquestionable. She is interested in encouraging women to participate more in the workforce and take an active part in the capitalist economy.

Tokyoites can expect to see reform of working conditions at the metropolitan government. More specifically, they can expect an improvement in working hours and increased employment of women.

Koike has also expressed a commitment to the many issues surrounding daycare for children that have an adverse effect on working families, and especially on women. Specifically, she has spoken of her commitment to solving the problem of the long waiting lists for daycare in the city and to implementing measures to prevent accidents at daycare centres.

Tokyo women have great expectations of Koike but she is not necessarily an advocate of women's rights for their sake. She's certainly keen to see more women contribute to the economy and to help ensure employers can "utilise" women more effectively.

But there's silence regarding ideas about alleviating poverty among women, or implementing expanded support to victims of sexual violence. Only time will tell whether Koike's historic appointment as the first woman to govern Tokyo will have any effect on tackling the nation's deeply embedded gender inequality.

Japan's new defence minister, Inada Tomomi, is a close ally of Prime Minister Shinzo Abe. Both Abe and Inada are members of Japan's powerful nationalist lobby group, Japan Conference, a vocal denier of the validity and legitimacy of "comfort women's" claims to compensation.

Abe has faced criticism from both outside and inside Japan for his decision to appoint Inada (who was elected to the House of Representatives in September 2005) to the post of defence minister.

Abe's decision might reflect a possible desire to appease the female voting public. Japanese women are generally opposed to national involvement in war and therefore the Abe administration's moves to revise Japan's pacifist constitution. They were particularly opposed to the decision this year to send Self Defence Forces to South Sudan.

When women reach politically powerful positions, especially if they are in the early stage of their careers, they run the risk of not being taken as seriously as their male counterparts, and of being open to attack. This has been noted in other countries as well, and women in Japan are no strangers to harassment and abuse at the hands of their male colleagues.

But Inada seems to be protected by her friend Abe to the point of being coached by him from the sidelines, so to speak, during fierce questioning from the opposition.

Renho, the new leader of the Democratic Party, follows in the footsteps of the political path-breaker of Doi Takako, who led the Japan Socialist Party (JSP) when it was the main political opposition from 1986 to 1991, and again from 1996 to 2003.

Renho has capitalised on being a woman in her political campaigns by referring to her experience as a mother of twins. Her powerful oratory skills and direct humour endear her to the public.

Her main challenge is arguably to unify her party and transform it into one that's regarded by voters as a viable alternative to the Liberal Democratic Party. Renho's decision to appoint former prime minister Noda Yoshihiko as her party's secretary general, second only in power to her, perhaps indicates her desire to pay it safe.

Many in the party were highly critical of the appointment because they partially blame him for the party's loss of its brief hold on government in the 2012 general election.

So, can Japanese women expect improvement in their lives with Koike, Inada and Renho in charge?

When it comes to parity in the workplace, they can certainly expect reforms, and it's important to have women in visible leadership positions. But it's also important to acknowledge that Japanese women are ambivalent towards these three leaders.

Neither Koike, Inada or Renho represent the majority of women - or the majority of Japanese people more generally - when it comes to pacifism and nuclear energy. These are two of the most politically significant issues in Japan today.

The majority support the pacifist constitution, which was promulgated in 1947, and are opposed to nuclear energy -- a topic that has become increasingly important since the triple disaster at Fukushima on March 11 2011.

Until women who are more in tune with the majority of Japan's voting public are elected to power, we shouldn't expect too many significant changes.