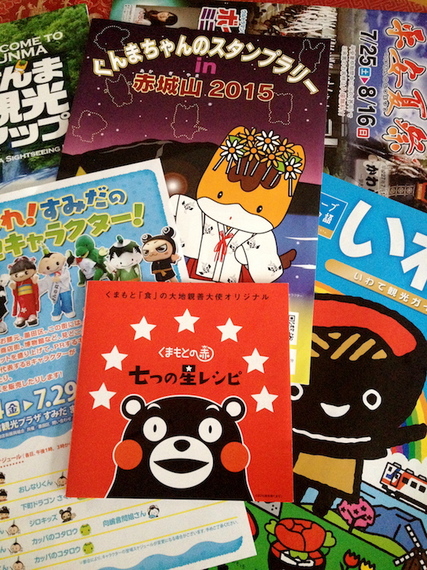 Japanese like mascots the way the internet likes cats. Every prefecture, every city, every district has a mascot. Neighborhoods have mascots. The Self Defense Force, police and fire department have mascots. Train lines and subways have mascots. TV stations and even programs have them, too. Japanese binge on mascots. 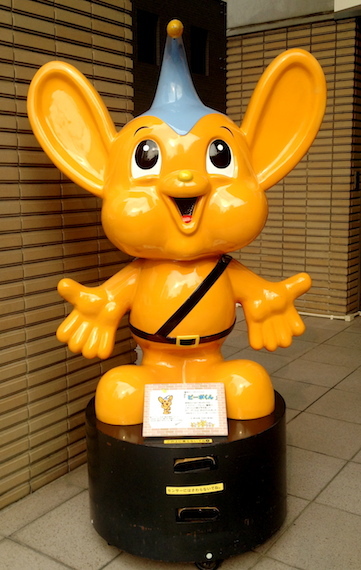 Pipo-Kun, the mascot of the Tokyo Metropolitan Police Department. His name is a play on the sound Japanese police cars make. Photo by Gail Nakada.

One mascot is good? Thousands are better! Just like cats on the internet. 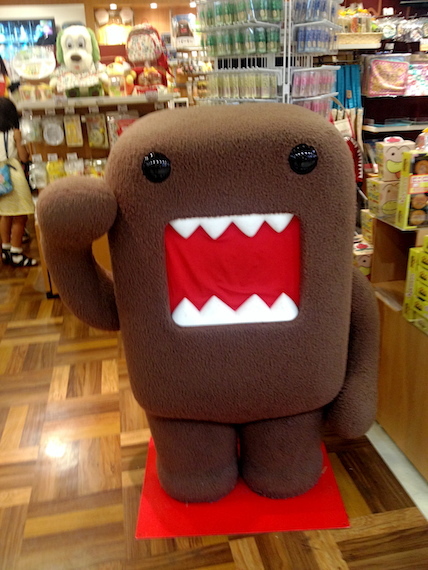 Domo-Kun is a profesional mascot, not a yuruchara. Photo by Gail Nakada. 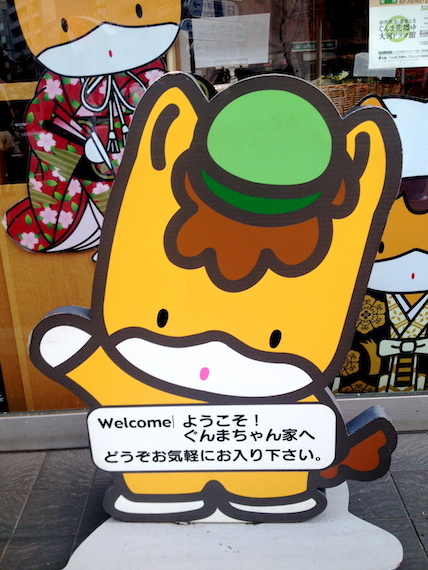 Gunma-chan, the official mascot of Gunma Prefecture, stands in front of the Gunma Tourist Office in Ginza, Tokyo. Why a horse? One of the Chinese characters in the word Gunma means horse. Photo by Gail Nakada.

Visitors are sure to see them popping up in the most unexpected places.

Regional Yuruchara represent the cultural or commercial specialties of their area: food, festivals, history, whatever the locals can think of, preferably all mixed together. As a result, many of them look like they were created by people indulging in far too many controlled substances. 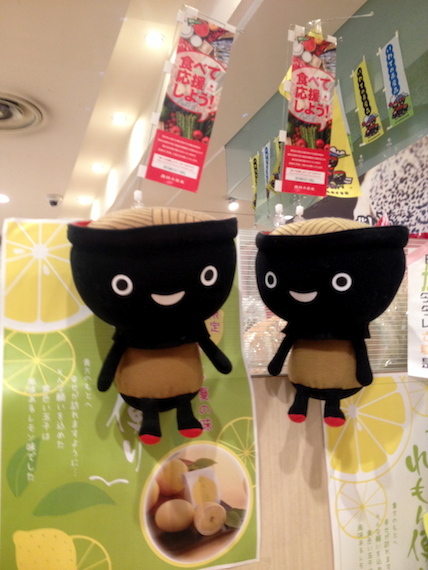 Scroll through some of the winners in the 2014 Yuruchara Grand Prix and see what I mean. I warn you, it's a trip down the rabbit hole into what-the-heck land.

The lack of sophistication in the designs is actually intentional and meant to set Yuruchara apart from slick corporate creations. No matter how odd they may seem to outsiders, Yuruchara are big money. According to a report by CNN citing research from Character Data Bank, they generated about 16 billion dollars in sales in 2012. 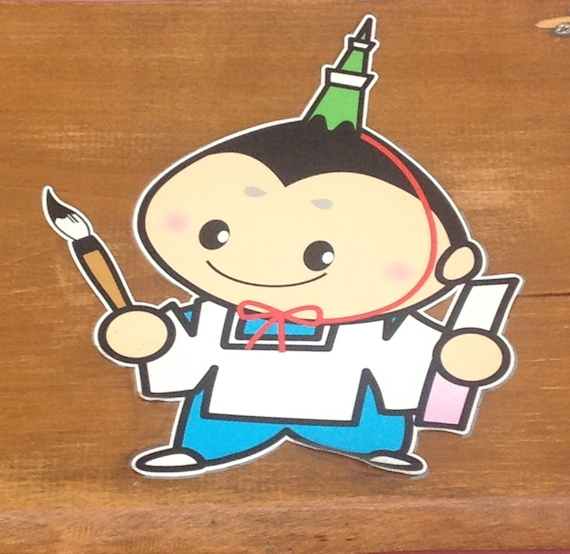 Oshinari-Kun from Oshiage, where Sky Tree is. Hence the tower on his head.The traditional clothing is because this is part of old Tokyo. Photo by Gail Nakada.

Two mascots that have transcended their original borders to become full-fledged marketing phenomena are Kumamon, the sweetly vacant bear from Kumamoto, Kyushu, and Funassyi from Funabashi City, Chiba Prefecture. 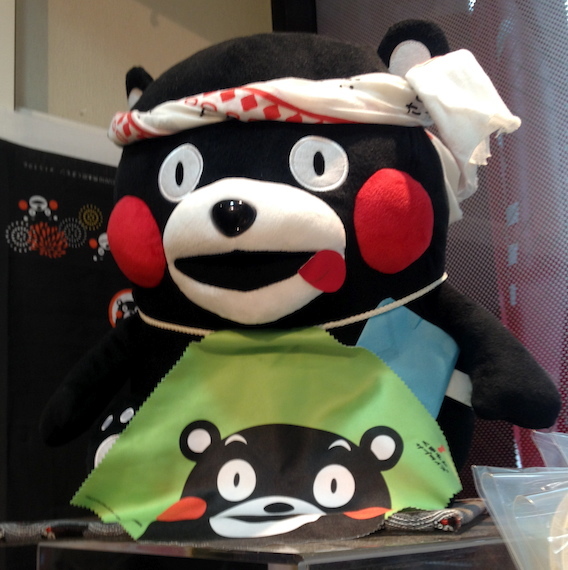 Kumamon always looks slightly surprised at the events unfolding around him. Photo by Gail Nakada..

Kumamon is licensed for stationery goods - pens, pencils, notebooks - tote bags of every size and description, T-shirts, toys, stuffed animals, sweets, hotels, you name it. He even appears on souvenirs from places that have nothing to do with Kumamoto. My favorite being the Kumamon/Mt. Fuji goods. 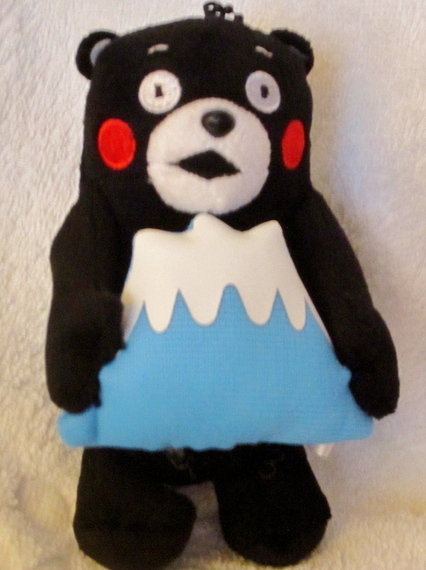 I guarantee you will see him on your trip to Japan.

Despite Kumamon's success, the prefectural authorities do not charge a copyright fee to companies wishing to brand with the bear. All advertising is good advertising in their eyes, as long as the product or service is pre-approved by the local government. 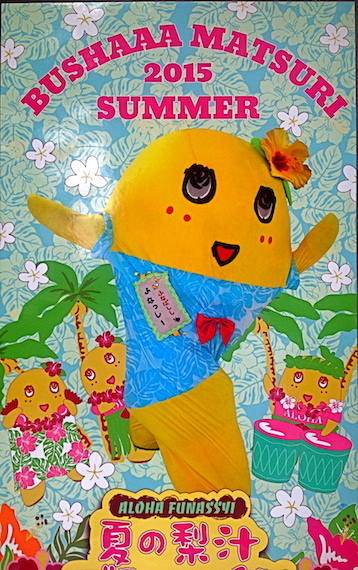 Funassyi is an uninhibited, dancing, hyperactive pear from Funabashi City. No, really. A pear. The city is famous for the fruit. Unlike most of its comrades, Funassyi is actually an unofficial mascot created independently. Its popularity has made the character welcome at many official city functions, but it remains a private enterprise.

This mascot is the polar opposite of quiet Kumamon and just about every other Yuruchara. Funassyi screeches, jumps and gyrates, dances, mugs, screams and shouts and gives every indication it has lost its fruity little mind. And people just love it. The insanity of Funassyi's antics are perhaps part of its appeal for the naturally reticent Japanese. 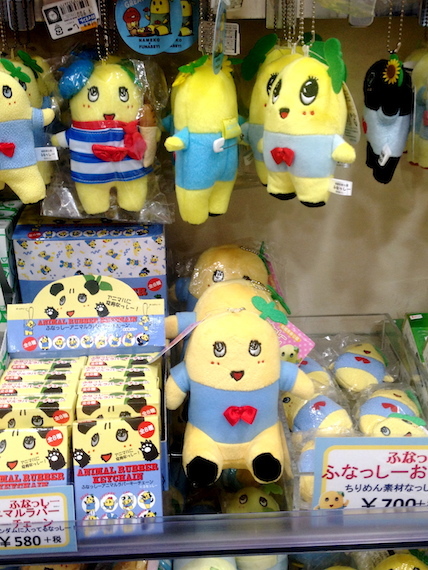 Have a look at some of the videos on Funassyi's YouTube channel to get a better idea of just what a pear can do with enough motivation and, perhaps, a lot of caffeine. It's even been invited to speak at the Foreign Corespondents Club of Japan. Talk about surreal...

Not many Yuruchara command the level of recognition (and economic clout) outside their regions as Kumamon and Funassyi. Local tourism associations proudly (stubbornly?) feature their own mascots at main railway stations, on guide maps, shopping street banners, and trot them out for all sorts of festivals, ad campaigns, and television appearances. So keep an eye out, you are sure to see a few on your travels around the country. 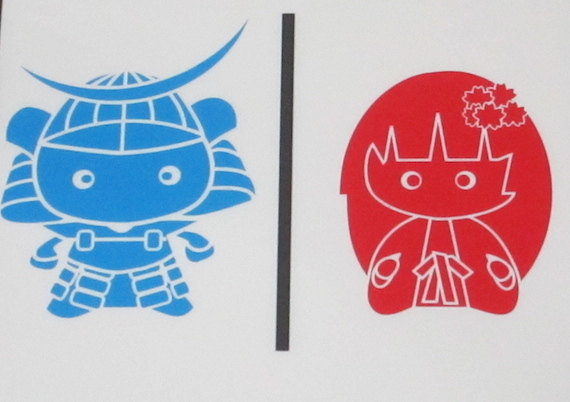 Lucky for visitors, the Japan National Tourism Association (JNTO) has a page in English on Yurachara. Well, a kind of English. The cities or prefectures supplied their own creative descriptions for this feature. Read them for yourself because you'll think I'm making it up.

Like Lerch-san, the mascot of Niigata Prefecture. He's an army man from the Slovak Republic (Wait, what?). In his introduction he says, "Of course, I am good at skiing, but some people say behind my back that I can't perform 100% in real games sometimes." Sounds like a personal problem, Lerch.

For a look at all the yuruchara mascots for metropolitan Tokyo, check out this web page.

Voting Made Easy
Register to vote and apply for an absentee ballot today
Register now
More:
travel
Newsletter Sign Up
An essential daily guide to achieving the good life
Subscribe to our lifestyle email.
Successfully Subscribed!
Realness delivered to your inbox