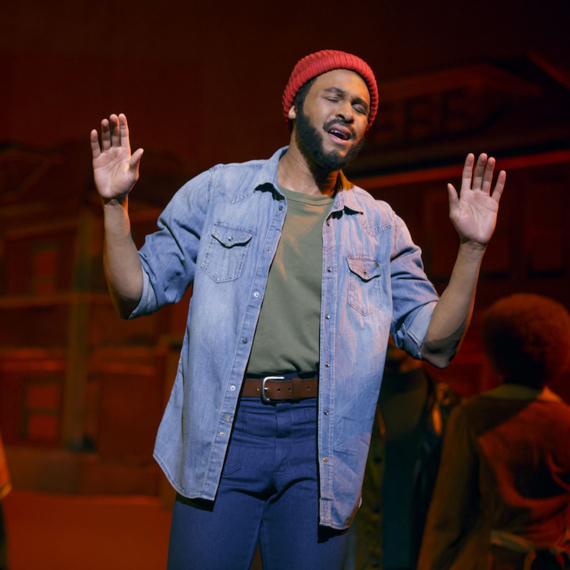 "Marvin would be so involved in the movements of today, both musically and as an activist," Broadway star Jarran Muse told me as he was preparing for a two week run of "Motown: The Musical" and the Hollywood Pantages Theatre January 31-Feb 12, 2017.

"He was the activist of Motown, Smokey the heart, Diana the glamour, the larger-than-life personna, and Barry the center, the nervous system, the brain," he added.

Just like "Cabaret" touring now, "Motown" is more poignant in these times of renewed racial divisions than ever before. And it's not lost on Muse.

Father, father
We don't need to escalate
You see, war is not the answer
For only love can conquer hate
You know we've got to find a way
To bring some lovin' here today

"Just being a Motown artist was like being an activist in a way," he commented. "They performed at clubs and venues that they couldn't even eat in, or use the restroom in. They broke barriers. Television and the power of the hits put original Black music in living rooms and on radios everywhere and made it Pop Music; Motown made 'race' music mainstream, made it Pop, and that's pretty powerful," he concluded.

The musical is told from Gordy's side based on his autobiography. "Barry has been there for us, the cast and crew. We have had his brain to pick for the last four years, we have been the recipient of so many stories, of so much history, all from the source, it's incredible," Muse stated.

And while Diana Ross, Michael Jackson and others have different recollections of the events or motives, there can be no denying Gordy's impact on the integration Black artist in to Popular music and the mainstream of the industry. It became bad business to not deal with Motown or play Motown records or artists, and Motown had a way of finding just what the people wanted and needed when they wanted and needed it.

And when you take those hits and wrap them in a two hour play with some of the best performers working, it becomes an incredibly good time, a must see for anyone that remembers The Ed Sullivan Show, Dick Clark, Soul Train, and the sounds from the Supremes to Rockwell, Smokey to Marvin.

"I've had the Gaye family come and see me, and sometimes it's better to NOT know they are there," he laughed. "They've all be so complimentary and that means a lot. Marvin Gaye meant a lot to a lot of people, and I get to bring a little piece of him back every night for them, what a great experience as an actor," he went on.

The musical is a sure-fire hit in venues across America. Just like the music on which it is based it levels the field, it brings everyone together. When the Diana Ross makes her way through the crowd singing "Reach Out and Touch" and we all do. And when Marvin sings, Muse, that is...we are transported back to Vietnam and so much more. The sounds of my youth that reverberate now so loudly..."What's Goin' On?"

Muse and the rest of the talented cast will be moving on from L.A. to markets throughout the country so be sure and catch the show when it's near you. It may be a "Hollywood" version of a music industry legend, but every story that came out of Motown was a "Hollywood" story. Because it wasn't just about the music, but the people, and yes, the color of the people, making it but more importantly breaking down the prejudices of those listening to it.