"Will Arnett put you up to this, didn't he?"

That's what Jason Bateman said to his agent four years ago when this Arrested Development star learned that Walt Disney Animation Studios wanted him to come voice one of the leads for Zootopia.

"Ever since Toy Story -- or was it Shrek ? - film actors were being invited to voice these really great characters in animated films. And that was something that I really, really wanted to do. I kept hoping that my career would someday get to a place where I'd then get to be one of those people who got the opportunity to do voice work on a movie like that," Bateman recalled during a recent interview. 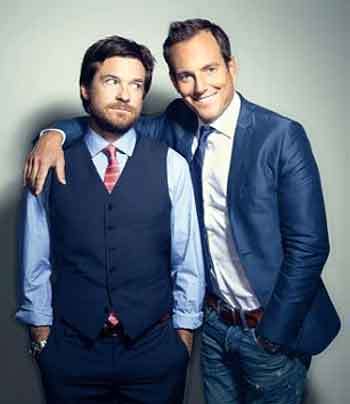 "Now you have to understand that I'm really good friends with Will Arnett. And he gets to do voice work for animation all the time. So Will knew how I felt about this. He knew that doing voice work in animation was a real career goal of mine. Which is why - just to bust my chops -- Will would say things to me like 'Gee, I don't think that they're going to call. You just don't have what it takes to work in animation, Bateman,'" Jason continued.

"So when that call finally came from Disney three or four years back ... This was a really big, big call for me. I literally pulled my car over so that I then wouldn't lose the signal," Bateman said. "But all I can think of as my agent is telling me the good news is that Will must have put him up to this. That this couldn't possibly be real. But when it did actually turn out to be real, that Disney really did want me to come voice Nick Wilde for Zootopia ... Well, I have to admit that that was pretty cool."

Ginnifer Goodwin was exactly excited when she learned Disney wanted her to come voice Officer Judy Hopps for Zootopia. But in the case of this Once Upon a Time star, it was personal satisfaction - rather than career ambition - that made her immediately say "Yes" to this project. 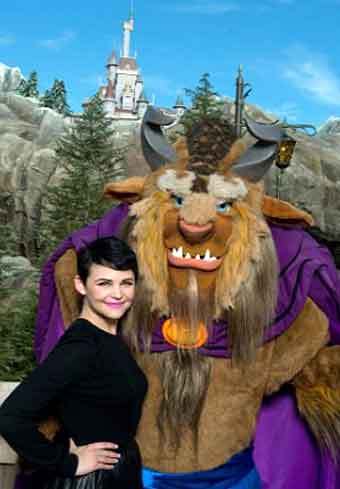 "I grew up seeing and loving every Disney film. Seriously. When I was a kid, my first love was Winnie-the-Pooh. Then came Snow White. That was a big one for me as well. She was my first Disney Princess. And because she was a brunette, I thought that this meant that we were semi-related," Goodwin laughed. "Then came Alice in Wonderland. She was a big obsession of mine for a while as well. Long story short, this is why me getting to voice a character in a Disney film has been a personal goal of mine for a very long time."

And Ginnifer finally got to do it -- sort of - when she was cast to be the voice of Fawn in Tinker Bell and the Legend of the NeverBeast. Which was one of the six Disney Fairies home premieres that DisneyToon Studios has produced over the last eight years.

"So one morning in 2013, I'm sitting in my kitchen in Vancouver - that's where we shoot Once Upon a Time - and I notice that I have all of these messages on my phone. All of my acting representatives - including my voice-over agent - have reached out to me at the exact same time. So I immediately think that Disney doesn't want to be the voice of Fawn anymore. That I was being fired off of Tinker Bell and the NeverBeast, " Goodwin remembered. 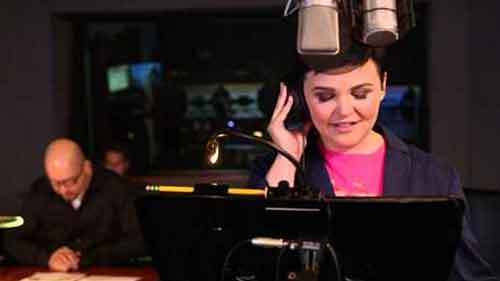 "And because I'm pregnant with my first son at the time and full of hormones, I start to cry. And my husband Josh -- because he wants to comfort me - starts saying things like 'Maybe it's good news. Maybe Disney's calling to offer you the lead in their next animated feature.' And I tell him 'That's mean. I am so obviously getting fired here,' " Ginnifer continues.

"So I sit down and dial the phone. And miraculously I can get everyone back on the line. And I think that the words my agent said were 'John Lasseter is calling to offer you ..." And I immediately turn to Josh and said 'How did you know ?,' " Goodwin stated. "The very next thing I did was interrupt my agent and say 'I'm in.' And he said 'Don't you want to know about the role? Or what the movie's about?' And I said 'No. We can do that later. Just call them back and say that I said that I'd take the job. Because I want this to be immediately legally binding so that Disney then can't back out. And then you can call me back and tell me what this job is all about."

Now Ginnifer - because she'd already been voicing Fawn ("NeverBeast was my animation boot camp") - at least sort of already knew her way around a recording booth. Whereas for Bateman, learning how to properly voice Nick Wilde - giving the animators at Disney exactly what they needed to work with -- was a real performing challenge for this TV & film veteran. 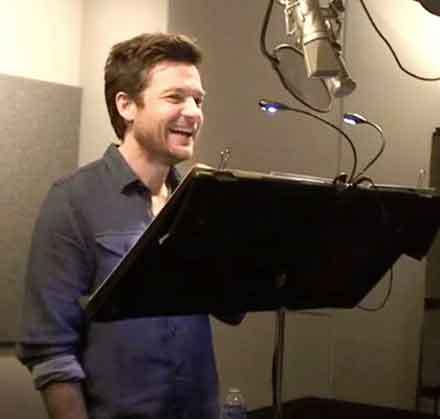 "Every few months, they'd call me in to do these two-hour-long recording sessions. I mean, typically there'd be four new scenes that they wanted me to record dialogue for. So it's just you in a booth with a microphone and those pages and the directors on the other side of the glass. And it's honestly a lot harder than it looks. I really had to concentrate in order to learn how to do voice-over work properly," Jason said.

Goodwin confirms what Bateman said. "As an actor, there's something genuinely terrifying about not having facial expressions, your body language, a costume or a prop to cling to. It's just you in that booth. And in order to give the animators and the editors everything they need to in order to make their movie, you just have to relinquish all control to them and say 'Okay. I'm going to throw everything into my voice and then try and give the directors a million different choices for every scene.' That way, they can then edit together a vocal performance that actually works for this character," Ginnifer enthused. "That's the weird part of working in animation. You really have to trust the people you're working with because you won't get to see what the character that you've been voicing is actually like until you finally get to see the finished version of that film."

Which was the exact same thing that Jason was thinking when he finally got to see the completed version of Zootopia at a friends-and-family-of-the-Crew screening several weeks prior to the official world premiere of this new Walt Disney Animation Studios production. 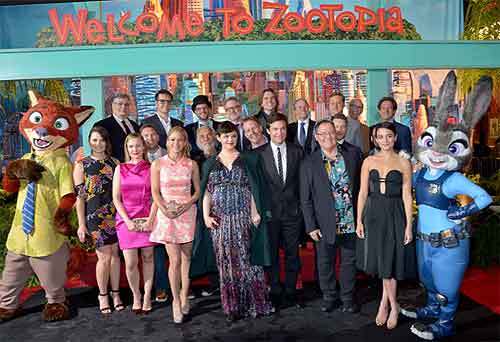 "I mean, the script changed so much over the three or four years that I was working on this thing. But I trusted Byron (Howard) and Rich (Moore). I saw that the movie that these guys were trying to make wasn't loaded with trendy jokes or issues. That they really wanted to make something that would be relevant today and tomorrow but would also have an evergreen quality," Bateman said. "So that friends-and-family screening for the Crew was the first time that I'd seen it all come together and truly then knew what Zootopia was really about. And I remember walking out of that screening feeling really, really proud."

Goodwin had a similar reaction when she finally got to see the finished version of Zootopia. She was especially impressed with the work that Disney's animators did with the voice work that Ginnifer had done for the scene where (SPOILER ALERT) Judy apologizes to Nick for stereotyping him. Thinking that this fox was just like all of the other predators.

"My memory of working on that scene was that I totally lost it. That Byron & Rich had to really pull me back because no one could understand what my character was saying because I had blubbered my way through the first couple of takes," Goodwin recalled. "But then when I saw that scene fully animated in the finished version of Zootopia, I was surprised by how genuinely moving it was." 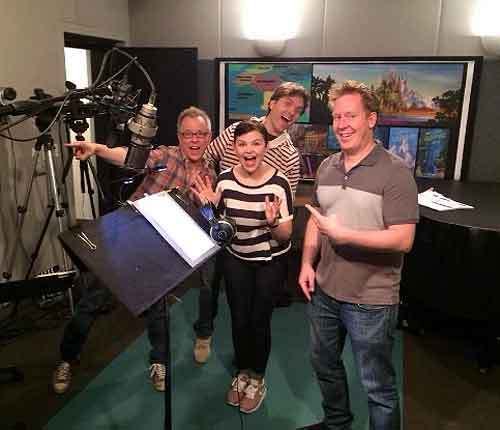 Mind you, to hear the directors of Zootopia talk, it was Ginnifer's emotionally grounded voice-over work as Officer Judy Hopps that really made that scene in this Walt Disney Animation Studios production work.

"Ginnifer had given us this great performance in the recording booth. She was actually crying when she recorded that scene, which then made it seem so real. And when Kira Lehtomaki - who was the lead on Hopps -- and the other animators heard that take, they were like 'You're not going to use a different take, are you?,' said Rich. "Kira wanted that take so badly. She said 'I know what to do.' And when she brought the first pass to Rich and I, we were like 'Holy $#1+ !' "

If you'd like to hear more of directors Rich Moore & Byron Howard's stories about the making of Zootopia, they'll be live on Twitter today from 10:30 a.m. to 11 a.m. PST answering fan questions at Twitter @DisneyAnimation