There's something missing in actor Matt Damon and director/writer Paul Greengrass' return to the Bourne action/spy/thriller franchise. It's hard to put your finger on it. But the brutal fight scenes, painstakingly coordinated cloak-and-dagger sequences and elaborate car chases aren't as intriguing as those in The Bourne Supremacy or The Bourne Ultimatum. 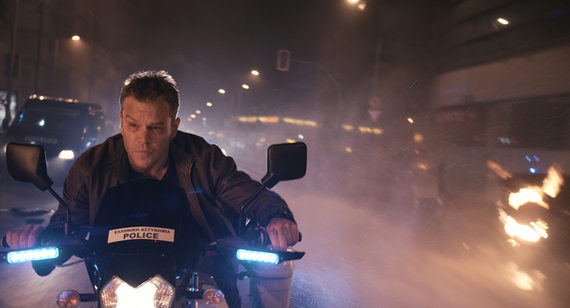 On paper (script by Greengrass and editor Christopher Rouse), the CIA plot to kill Jason Bourne, the naïve soldier they drafted into an experimental special ops program, should be totally engrossing. Says the menacing CIA Director Robert Dewey (Tommy Lee Jones): "No bringing in Bourne. He has to be taken down." Also, following the vengeful Jason Bourne, the hoodwinked amnesia-suffering killing machine who wants to destroy his tormentors, should be compelling. Add plenty of clandestine meetings and attempted assassinations, and the plotline, characters and events should hit their mark consistently, not intermittently. Right?

Nicky Parsons (Julia Stiles), a colleague of Jason Bourne (Matt Damon), tracks him down to the Greek/Macedonian border where he's become a successful underground fight club boxer. She has info that will help him determine his real identity and what happened to his father, whom he believes was killed by terrorists. She also wants to expose the Central Intelligence Agency's perverse machinations. Parsons and Bourne are being tracked by the CIA, Director Dewey and the hacker and counterinsurgency expert Heather Lee (Alicia Vikander, Oscar winner Supporting Actress The Danish Girl).

Besides silencing and killing the assassin he created, Dewey is in cahoots with tech billionaire Aaron Kalloor (Riz Ahmed, Nightcrawler) who is the CEO of the hip social network Deep Dream Corporation. He's an entrepreneur who is loved by nerds and geeks and swears he respects their right to privacy.

Caller's fans don't know that their guru is secretly involved with the CIA's plan for wide scale espionage. "Ironhand," the agency's new ops mission, involves "Full Spectrum Surveillance," the kind of snooping that gives Edward Snowden palpitations. Kalloor is in over his head as Dewey puts the screws to him. Meanwhile Bourne seeks revenge for the murder of his dad, and new clues point to the CIA.

Yes Greengrass is a champ at action scenes. For two hours and three minutes he puts on a graduate school course in frenetic direction. Yet what's on view lacks the style, class and depth he's exhibited before. The grand technique that made his Bourne films win Oscars for technical credits (Christopher Rouse won for editing The Bourne Ultimatum) has lost its charm. One hour into the movie, you feel like you're watching outtakes from a Mission Impossible sequel. It all leads to a grand finale chase scene in Vegas that is worthy of a great action B-movie, not a Bourne film.

The personal rights versus public safety theme is very topical. Alicia Vikander's character adds a new complexity. Vincent Cassel, as the deadly assassin known as "Asset," is evil in a two-dimensional way. Tommy Lee Jones is convincing as a devious, cold-hearted adversary, but his performance is too reminiscent of his Oscar winning role in The Fugitive. The turmoil plays out over several countries, providing alluring locations that are well shot by Barry Ackroyd (Hurt Locker). Set design, art direction and music are decent but don't stand out.

Perhaps it's tough to judge this movie because the nostalgia for the other Bourne movies made by Damon and Greengrass is so strong and indelible. Perhaps wanting the filmmakers to take this franchise up a level is asking too much.

Either way, it's hard to lose that nagging feeling that this good film could have been great.