When Jason Collins became the first active male athlete in a major U.S. professional team sport to come out as gay in April, the Boston Red Sox extended a unique invitation to the NBA veteran.

We salute you, @jasoncollins34 for your courage and leadership. Any time you want to throw out a first pitch at Fenway Park, let us know.

On Thursday night, he took them up on it.

Wearing a Red Sox jersey, the 7'2" center, who spent 32 games with the Celtics during the 2012-13 season, took the mound. The right-hander threw out the ceremonial first pitch to Boston manager John Farrell.

"This is an opportunity for us as an organization. We respect his courage, we respect his choices," Red Sox manager John Farrell said before the game, per the Associated Press. "It’s an opportunity to showcase that. At the time when this was a possibility of coming out, we had said we’re an organization that embraces all, and I think this is a very small way of showing that."

Afterwards, Collins showed off his new jersey to his Twitter followers.

I went from the wind up. Over the plate, right down the middle for strike 1. Thank you @RedSox. #Pride #bostonstrong pic.twitter.com/XElSoZ3CF8

Collins wore the No. 98 while playing with the Celtics and Wizards last season in tribute to Matthew Shepard, the 21-year-old gay college student who was beaten and left to die outside Laramie, Wyo. in October 1998. 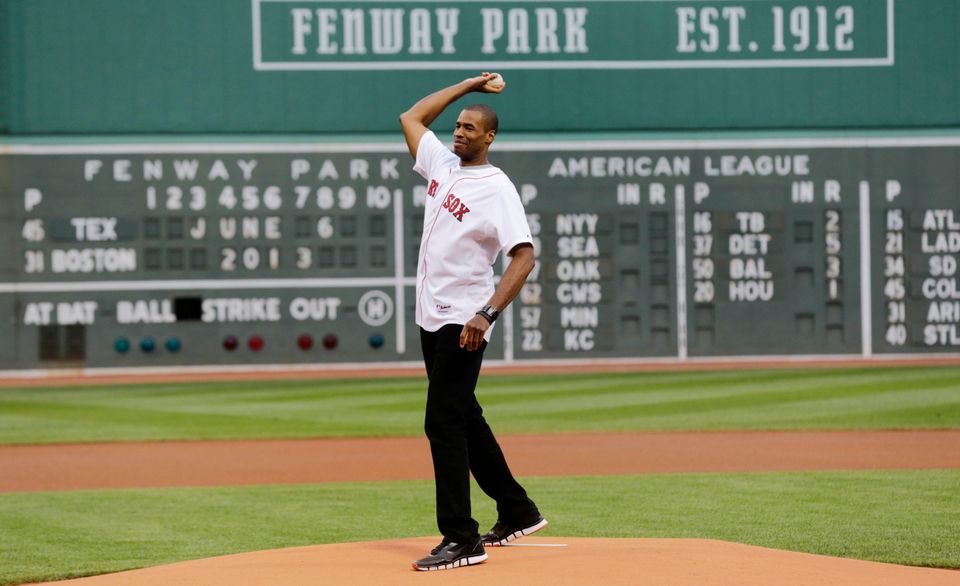 1 / 5
Jason Collins
Jason Collins, the first active athlete to come out as being gay in one of the four U.S. major professional sports leagues, throws out a ceremonial first pitch at Fenway Park before a baseball game between the Boston Red Sox and the Texas Rangers in Boston, Thursday, June 6, 2013. Collins played for six NBA teams in 12 seasons. He was dealt in a midseason trade from the Boston Celtics to the Washington Wizards and becomes a free agent July 1. (AP Photo/Charles Krupa)
AP