In 1977, Glenn Burke, an African-American, closeted, gay Dodger, delivered the first ever high five to Dusty Baker at Dodger Stadium. Two years later he was out of baseball, having been traded to the A's and then not played by Billy Martin, who famously said, "I won't play a faggot on my team." Glenn Burke changed the world forever with that one hand slap.

I am co-producing the movie of his life, Out at Home: The Glenn Burke Story, the anti-42, about a player who did NOT get to play to his GREAT potential but instead, after coming out when his career was over, ended up destitute and a drug user who died of AIDS, far away from the crowds and the outpouring of love and support we are seeing today.

There will be much written in the next days.

ABOUT TRUTH AND ABOUT COURAGE.

I hope, with the celebration of this barrier being broken by this great, brave individual, that we remember and honor all those who lived and played and died in the dark, in secret shame.

Welcome into the light, Jason Collins. 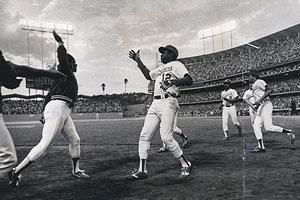