And when Jason Momoa -- the part Native Hawaiian actor who played the fierce warlord on "Game of Thrones" -- takes a stand for his real-life homeland, his fans and celebrity friends join the cause.

The Honolulu-born actor joined an impassioned group of environmentalists and Native Hawaiian activists on Thursday on Hawaii's Big Island to protest the construction of a $1.4 billion telescope on a remote spot atop Mauna Kea volcano.

The telescope, known as the Thirty Meter Telescope, is slated to be one of the world's largest and most powerful, but the site is considered sacred by Native Hawaiians.

Momoa has flooded his Instagram feed with photos supporting the protesters and is urging his celebrity friends to support the cause by signing a Change.org petition to "immediately halt all TMT-related construction" and "stop all arrests" of "those standing in protection of Mauna Kea."

So far, hundreds of people have joined the protest on the dormant volcano's summit and at least 31 people have been arrested.

Singer Nicole Scherzinger (who was also born in Hawaii), actors Ian Somerhalder, Jai Courtney, Jill Wagner, and Momoa's step-daughter, Zoe Kravitz, have shown their solidarity by writing #WeAreMaunaKea on their bodies and urging their collective 8 million followers to sign the petition.

"This is more than an issue for those living on the Big Island," Momoa wrote on an Instagram post. "This is [sic] global issue of how we are treating our lands. #WeAreMaunaKea represents all of us humans and are [sic] solidarity towards preserving our natural resources and protecting our native habitats."

Below, see Momoa and the celebrities he's rallied together for Hawaii's #WeAreMaunaKea movement. 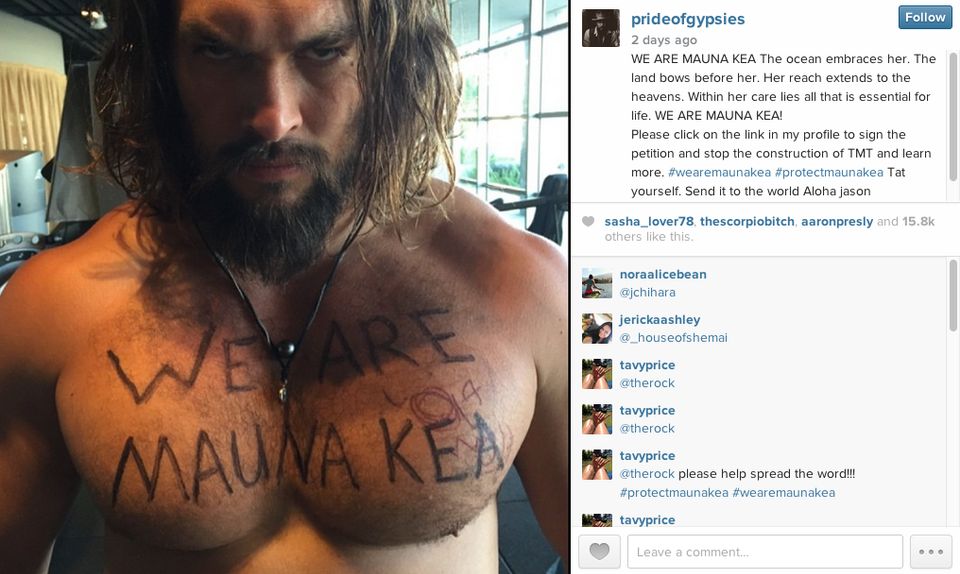