Paleontologists in Japan have unearthed the jaw of a primitive mammal from the early Cretaceous period.

The pint-size creature, named Sasayamamylos kawaii for the geologic formation in Japan where it was found, is about 112 million years old and belongs to an ancient clade known as Eutherian mammals, which gave rise to all placental mammals. (A clade is a group of animals that share uniquely evolved features and therefore a common ancestry.)

The jaw sports pointy, sharp teeth and molars in a proportion similar to that found in modern mammals, said paleontologist Brian Davis of Missouri Southern State University, who was not involved in the study. 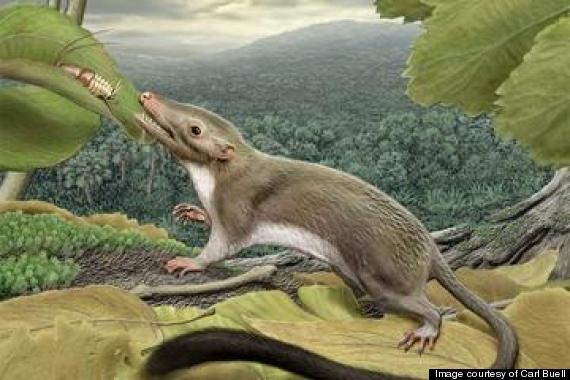 Eutherian mammals were rapidly evolving traits that would eventually be found in placental mammals. Here, an illustration of what the first placental mammal whose jaw bone was discovered might have looked like.
[In Photos: Mammals Through Time]

The new mammal fossil, described today (March 26) in the journal Proceedings of the Royal Society B, suggests that these primitive creatures were already evolving quickly, with diverse traits emerging, at this point in the Cretaceous Era, he added.

Between 145 million and 66 million years ago, most mammals were tiny creatures that scampered underfoot as giant dinosaurs roamed the Earth. Scientists recently proposed that the first mammalian Eve, the mother to all placental mammals, lived about 65 million years ago, when dinosaurs went extinct. The first true mammal likely emerged at least 100 million years before that.

But because the fossil record is spotty, determining exactly when mammals evolved their specific traits has been murkier.

Amateur fossil-hunters were searching through sediments in Hyogo, Japan in 2007 when they unearthed the skeletal fragments of an ancient mammalian jaw. They turned it over to a local museum, said study co-author Nao Kusuhashi, a paleontologist at Ehime University in Japan

The jaw contained four sharp, pointy teeth known as pre-molars and three molars with complex ridges. That same pattern in the number of each type of tooth is found in placental mammals to this day, whereas earlier mammals have more of the sharp, pointy teeth.

The teeth probably allowed Sasayamamylos to poke through the hard exoskeletons of beetles or other insects, Davis told LiveScience.

In general, molars probably allowed these primitive mammals to chew their food well, extracting as much energy as possible from it, Davis said.