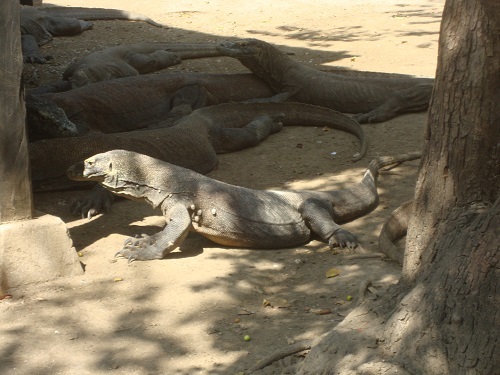 As for jaw pressure, well come here, kitty, kitty, kitty! According to the latest Australian research, its bite is "incredibly weak for such a big lizard--less than you'd expect from the average house cat." If it tried to crush its prey as crocodiles do, "it would break its own skull." Meow!

BUT what Komodo does have are shark-like serrated teeth covered by gingival tissue, creating an ideal nursery for the more than 50 strains of toxic bacteria swarming around its mouth; if its prey does not die from the bite and blood loss, it will succumb to blood poisoning within about 24 hours, while the dragon waits nearby for its dinner delicacy to expire. 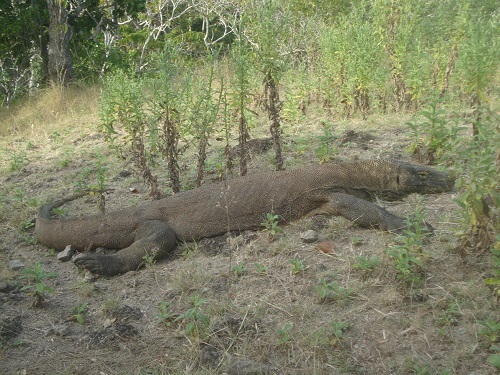 Though a dwarf compared with Saltie, Komodo is the largest of the lizard family, eating up to 80 per cent of its body weight at one sitting, whether that be carrion, deer, pigs, large water buffalo - or, opportunistically, humans. 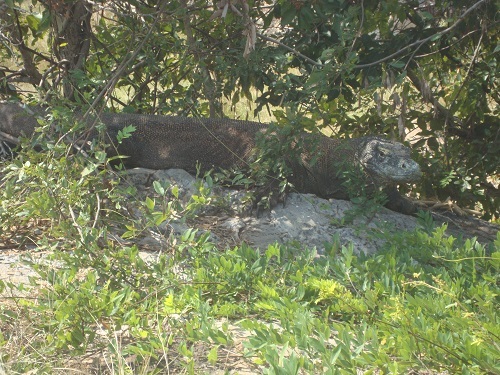 They may seem slow as they amble on their stubby fat legs but they can reach a speed of 12 mph in a second, rearing up on their hind legs and tails to fight. 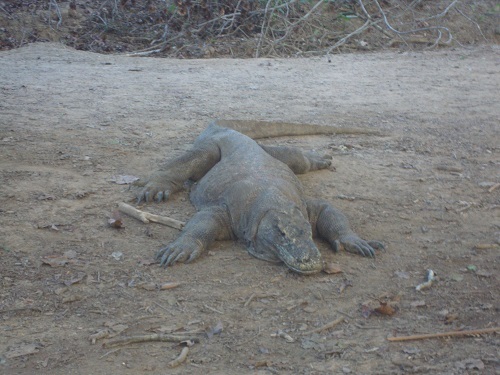 There are only up to 5,000 of them in the world, and you'll only find them on eponymous Komodo Island in Indonesia and nearby Gila Motang, Rinca, and Flores, way to the east of Bali. They're listed as endangered due to a dearth of egg-laying females, poaching and human encroachment.

It's time for a visit.

Landing on semi-arid Rinca, who should we meet right away round the camp kitchen at Loh Buaya but half a dozen Komodos snoozing on the ground. They don't look at all horripilating, like they wouldn't say boo to a mouse, but that might be because I'm jaded after huge toothy, gape-mouthed Saltie. 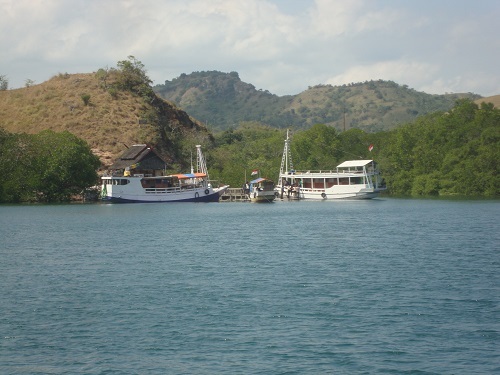 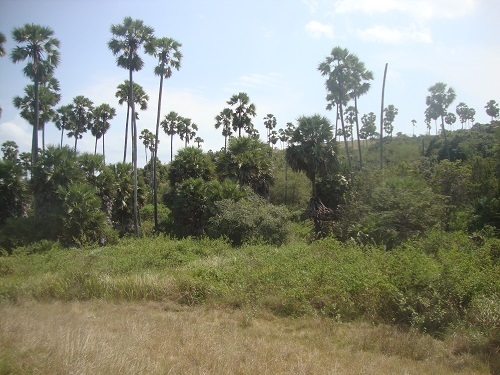 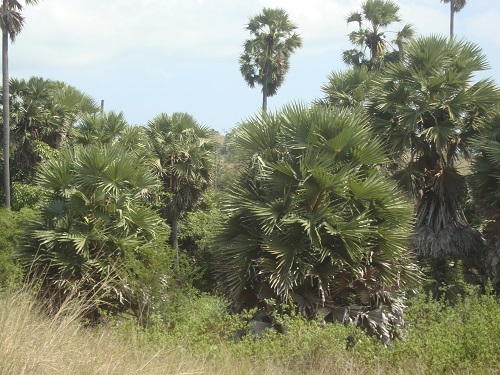 They have greyish heads and brown bodies, with what appear like warts on their scales, and they look totally ineffectual. Scaley, warts and ineffectual? Sounds just like a board meeting of your favourite company or organisation (fill in the blank).

But then Komodo dragons are also not particularly interested in chasing or hurting humans, which is more than you can say for the board of your favourite company or organisation. 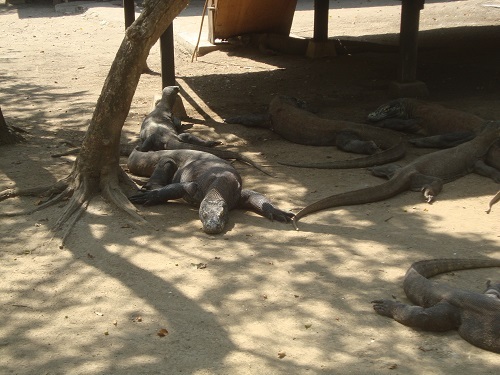 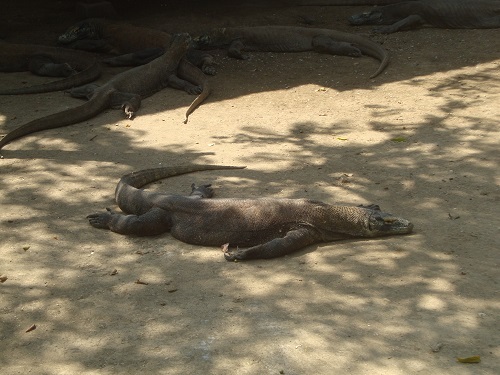 A two-hour hike inland will take you to Komodos in even wilder nature. You have to take a guide; mine, Mansur, carries a frail-looking forked stick which is our only defence should a dragon turn aggressive. Mansur, supposedly, will pin the beast's slender neck to the ground. A lot of good that will be if it's already up on its hind legs and tail, lashing out with claws and teeth.

We walk through dry forest. Mansur explains that dragons may eat only six or 12 times a year, swallowing goats whole, and devouring buffalo in huge chunks. 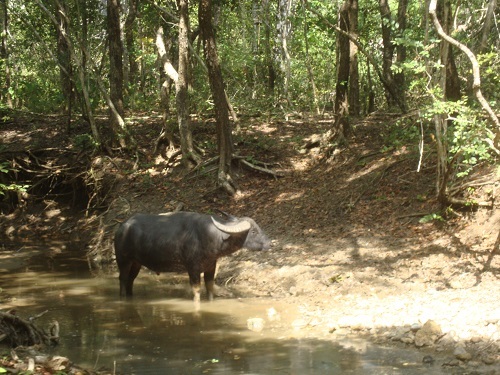 I'm standing under a tree near rocks on open savannah at Mansur's instruction, forked pole in hand, as he goes a-scouting. What am I supposed to do if a dragon suddenly emerges, grandstanding? I'll wax Shakespearean, fencing with fork against claws: Have it thee, base varlet! 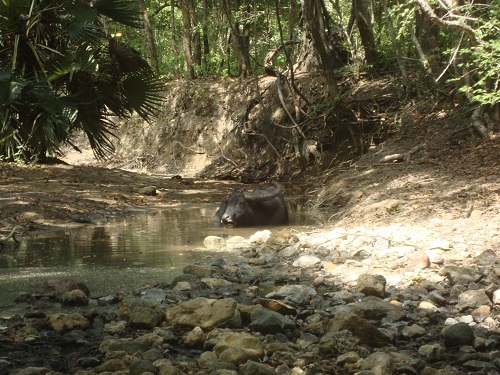 I spend the next 10 minutes thus, mulling over a mention in Lonely Planet that dragons do occasionally go after people - two villagers killed in the last 20 years; only recently one bit a park ranger doing paper work in his Rinca office.

Suddenly strange barking sounds emanate stage left. Gawd, what the hell is that?

'That' is Mansur a 100 yards away near a rock, gesturing obscenely - well it looks obscene to me. I take myself towards him, fork and all. He shushes me, leads me round a rock and says 'there, there.' 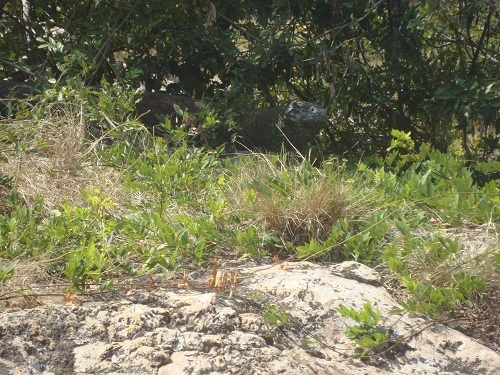 There indeed, upon a rock, beneath a branch, is a grey face and brown body, a 10-foot male. Mansur has turned up trumps. He knows where the favourite rocks are. He motions me up the rock. Now I'm only a few yards from the beast. Mansur says they can live up to 50 or 55, and this one is 35. 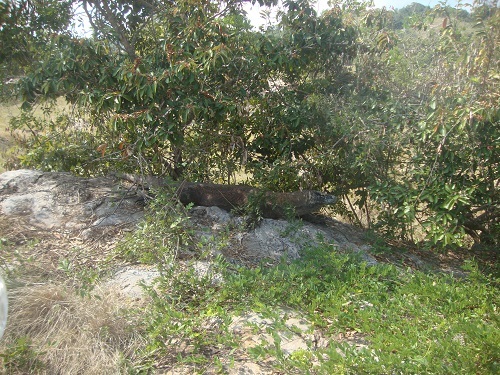 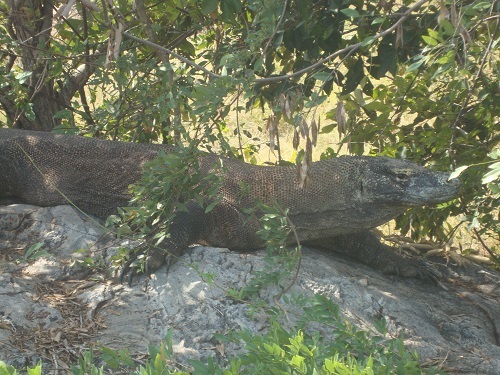 He, the dragon that is, blinks, then turns his snout nonchalantly towards me. Well, I hope it's nonchalantly. 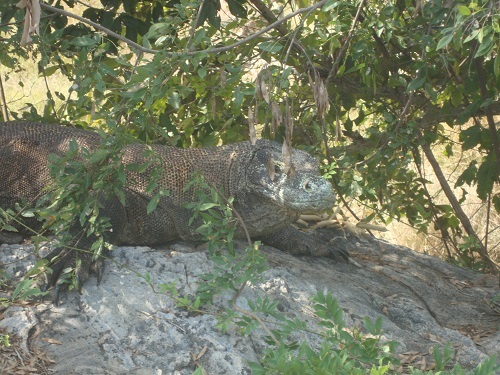 We move on to Komodo Island. It's greener, much larger, and spectacularly more dramatic, with saw-tooth crags soaring up from the sea, and huge bays. We drop anchor for the night. Three canoes paddle past selling carved wooden dragon souvenirs. Huge flying foxes swoop over a nearby islet. Other than that all is idyllic tranquility as night falls. 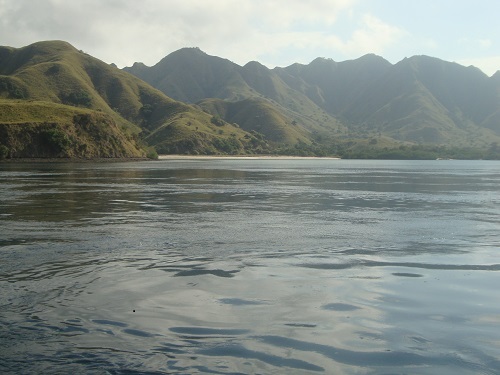 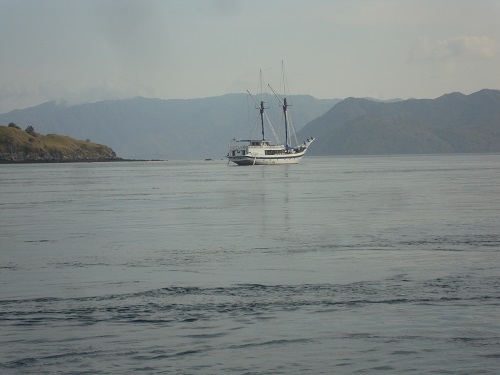 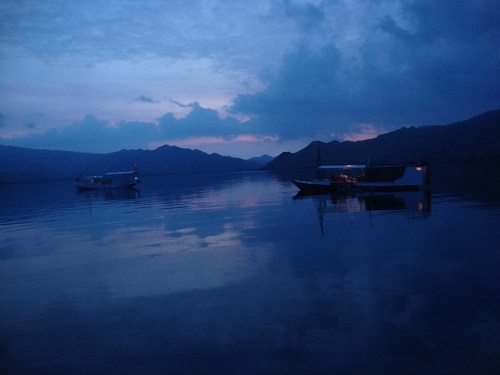 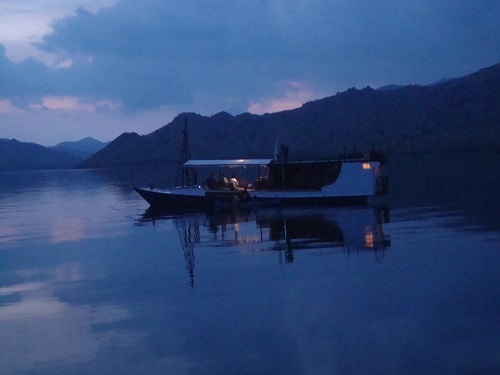 I cannot sleep. As dawn breaks, the island appears more mysterious than ever, its saw teeth and green mountain folds veiled in cloud and mist. At last I set foot on the Komodo dragons' ground zero. And how do I do it? 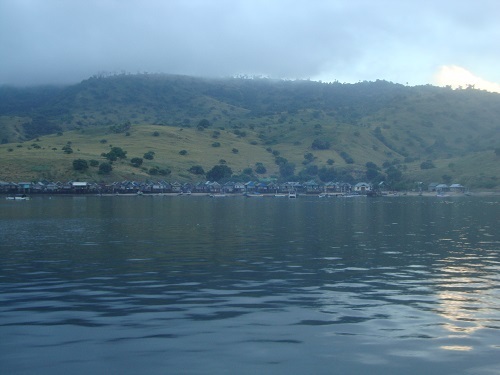 By clambering up the wooden struts of a lofty pier like a spider monkey, nearly falling into the water as one boat hand tugs at me from atop the pier and the captain gives a hearty shove to my arse from the deck below - all because the wretched tub has too deep a draught to enter by the normal lower steps. O dignity, wherefore art thou dignity!

There are estimated to be up to 3,000 dragons on Komodo, and we only go a short distance before we come eye to sleepy eye with a large male resting under a tree. He really is impressive lying there with his stout, sturdy clawed feet and curving tail - which he can use as weapon to wham into victims and knock them over. 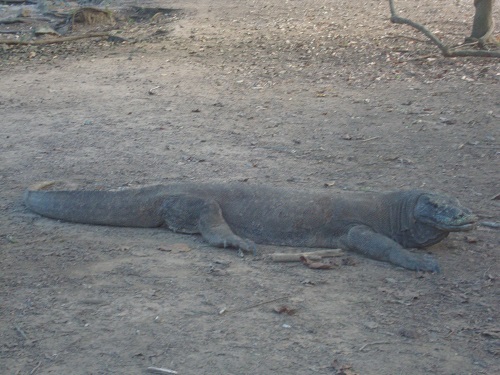 He flicks out his long, forked, yellow tongue and just stares at us in contempt, turning his head. We continue on, following a trail of white dragon poo amid bird calls. Latif, the guide, explains how young dragons climb trees and live up there to avoid being eaten by adult males. 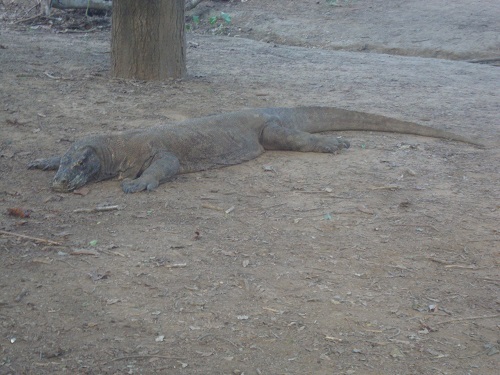 Up on a rock we come upon a female, resting. She's a good bit smaller than the male, but reacts with the same disdain. 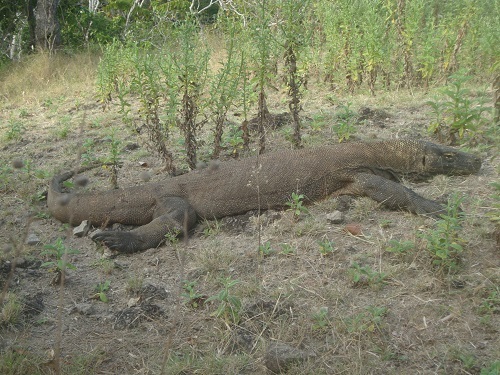 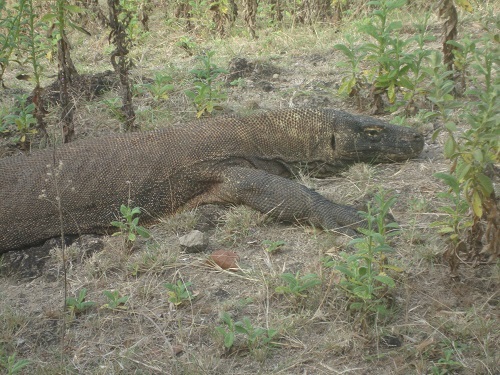 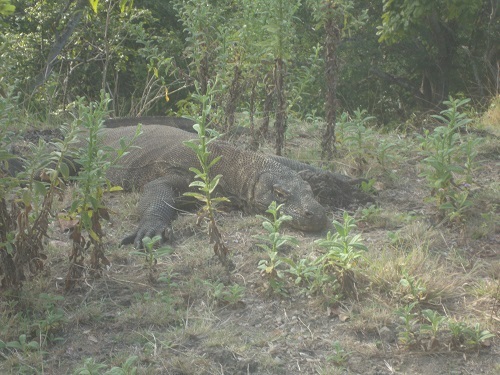 Meanwhile, the views over the vegetation to the mountains are superb. 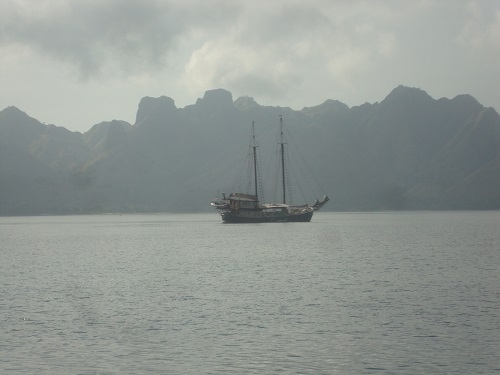 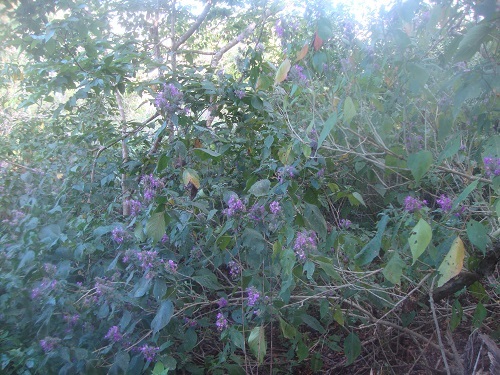 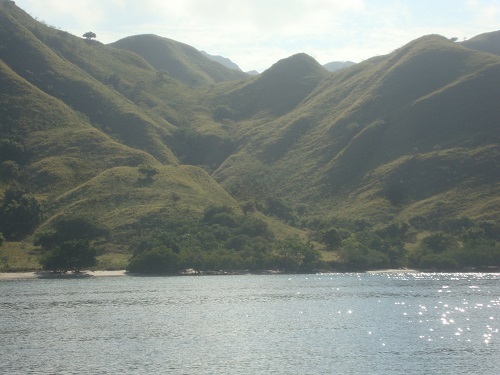 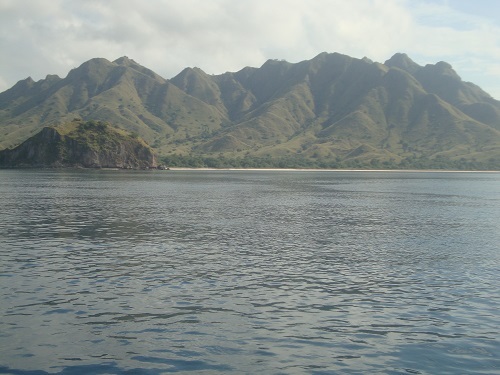