They call the lion the King of the Jungle or King of Beasts, but when it comes to jaw pressure as measured by pounds per square inch (PSI), the Lion King is a comparative pussy. He may indeed pack more than a puny human's 100 PSI, but he's way, way, way below the major league's big guns.

Put variously at from 600 to 691 PSI by differing tables, he doesn't even come close to a shadow of the hero (or anti-hero) in the first section of this series on 'Jaws,' the great Australian Saltwater Crocodile, known to his fellow Aussies as 'Saltie,' who tops the chart with at least 5,000 PSI. 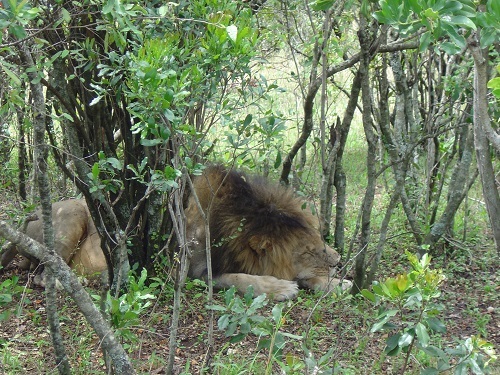 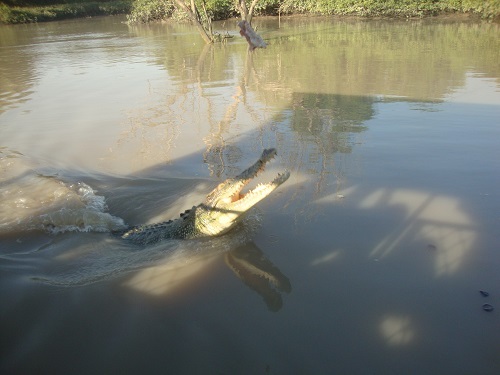 And though he's way above the hero of the second section, the Komodo Dragon, who barely reaches the PSI of a house pussy, if that, he doesn't have the advantage of all those dozens of toxic bacteria swimming around his teeth.

That said, you clearly don't want to get bitten by a lion. PSI be buggered, you're not going to make it through those long puncturing canines (shouldn't that be felines?) nor the slashings and tearings of that wild pendulum of a head. 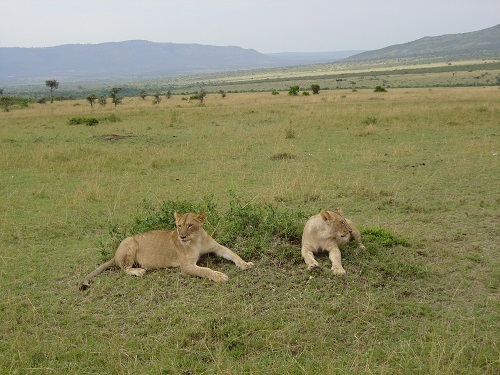 Interestingly that hero of the big screen, and terror of Amityville nightmares, the original Jaws, the Great White Shark, does no better - he's only given a 669 PSI by the mixed martial arts website Sherdog, though a bull shark is given 1,250 PSI, and Buzzle website puts the great white at an 'estimated' 4,000 PSI. Go figure! Clearly the latter didn't want any on-hands proof.

Whatever, it's clear that death by teeth does not rely on PSI alone, and that's without tackling those serpentine friends with the venomous endowments.

Even so, the PSI charts do supply some interesting shreds, so to speak, of information. I mean, who would have thought that the snapping turtle, with males weighing about 22 pounds, would outrank the lion, white shark (according to some), Siberian tiger, grizzly and polar bear with a 1,004 PSI, the latter two being given only 975 PSI and 440 PSI respectively? 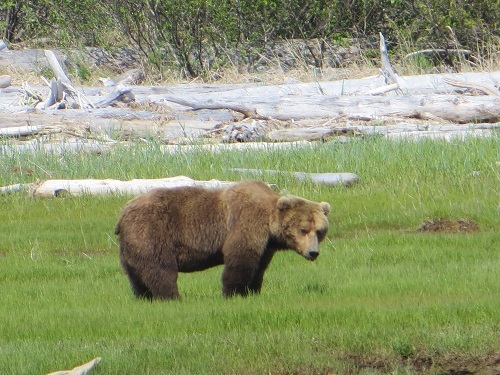 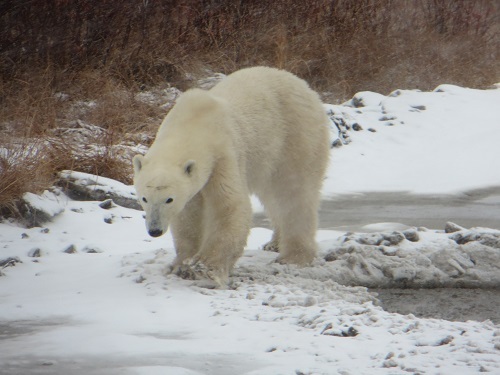 And a snapping turtle has three times his psi?

As for the Tasmanian Devil, that little bundle of marsupial fun may only have a 200 PSI, but weighing only about 18 pounds, it's reckoned to have the most powerful bite relative to its body size of any living animal.

They're about the size of a medium cat, with a pointed snout, a narrow white necklace on their blackish fur and a white spot above their tails. And they look in very ugly humour indeed when they open their mouths with those sharp white teeth. 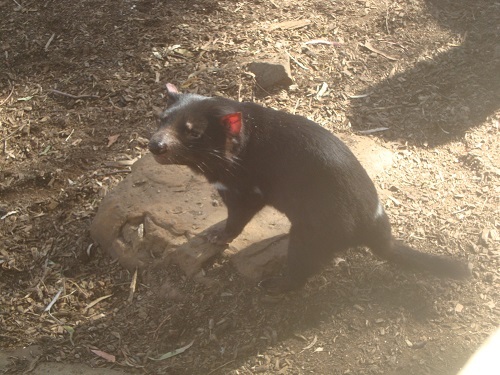 Here at a reserve in Tasmania they're in a real argie-bargie. A keeper has given some meat to a female, another female approaches, and the grand aria begins. You've never heard such high-screech growling and snarling. It almost outdoes the House of Commons at question time - or the annual board meeting of your favorite company or organization.

Their pinkish mouths open, they bare their teeth, and they're doing a proper in-your-face thing. Their mouths are touching but, most interestingly, they're mock-biting without really making contact. It must be the animal equivalent of TV's World Wrestling smack down. 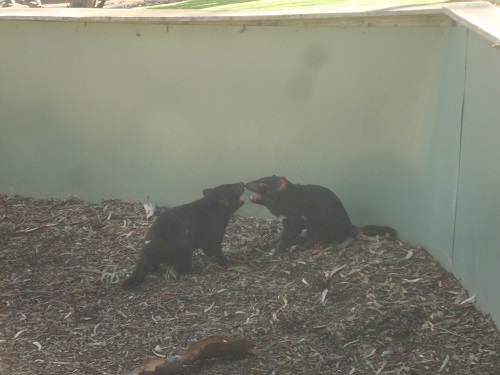 What did you say?

Getting back to the top ten charts, here's a look at the average PSI of animals encountered in recent Dispatches from the Looney Front.

Here he is Kenya's Masai-Mara Game Reserve having sex. I must be the Safari Cupid because they're going at it hammer and tongs. You'll have to take my word for it; she's beneath him, and they start up again every 15 minutes with a roar from him, and a squeal from her. 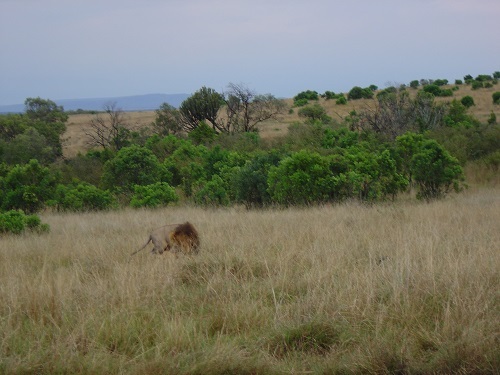 Needless to say, I put my back out bending down to put on a shoe, and am now wandering round the park doubled over, looking like the missing link for all the camera-happy tourists (ooh, look, that's a rather a large baboon!).

Some sites put the leopard slightly higher than the lion at 700 PSI, but he doesn't seem to figure on any chart I've seen. Here's one in Masai-Mara. 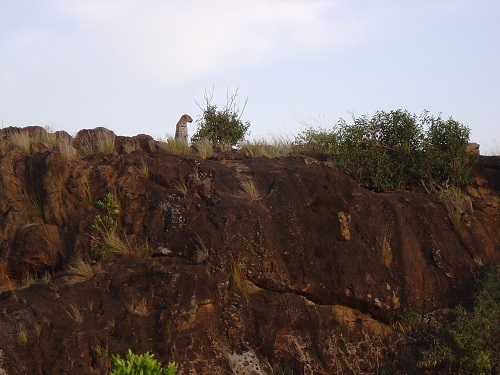 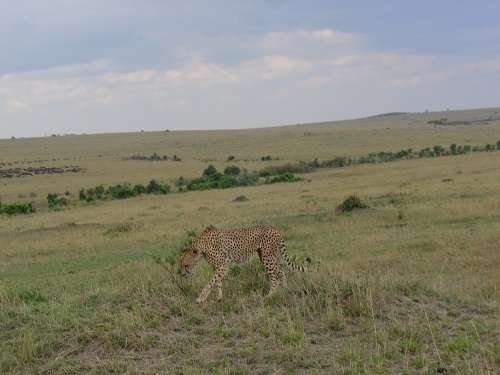 The tiger is generally listed ninth with 1,050 PSI, but I haven't spotted any of them in the wild.

The spotted hyena comes in eighth with 1,100 PSI. Here you can see some as they come in from the wild for nightly feeding in Harar, Ethiopia. The founders of the 1,200-year-old city put several little cubby gates in the walls for scavenger hyenas, who evidently don't attack humans hereabouts, to enter and clean up the refuse every night. 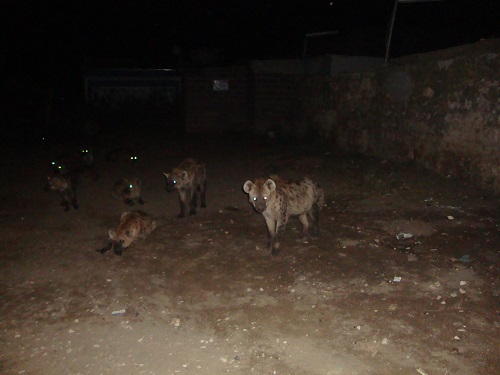 And yes, laughing hyenas really do sound as if they're laughing, the sort of maniacal screeches you get at an executive meeting of your favorite company or organization. 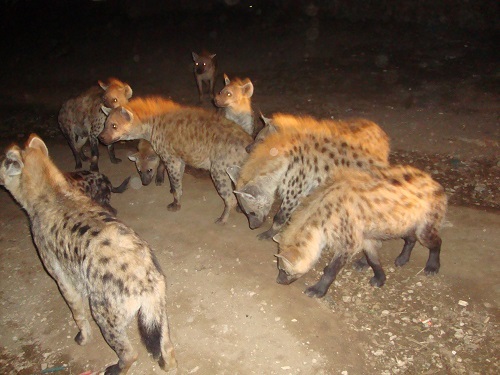 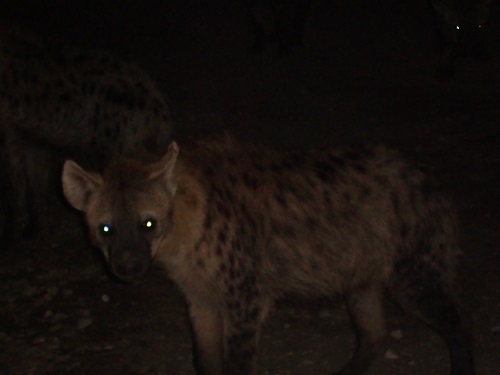 In a centuries-old tradition there are several sites where men feed them every night - it is considered good luck - draping meat round sticks that they put in their own mouths while the spotted dog-like creatures with the low-slung back chassis come up and snatch them (the bits of meat, that is). 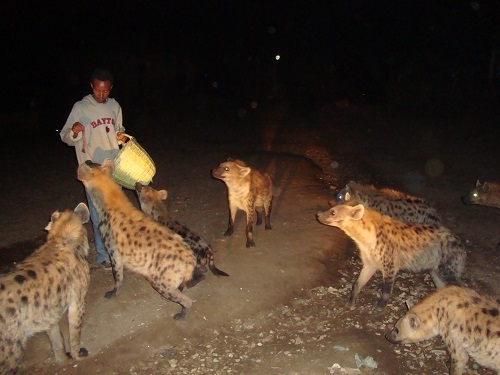 Onlookers stand around, watch and pay the guy. The animals can be pretty lethal to humans, especially if they attack in a pack, but here they are said to be pretty docile, spending the day sleeping in nearby caves and turning up for their regular evening buffet. 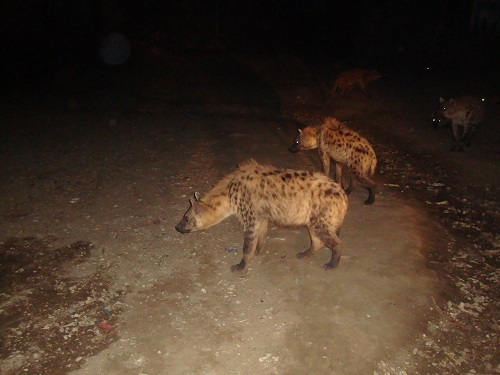 The grizzly bear, sighted frequently in Alaska and Canada's Yukon, comes seventh on some sites with a 1,200 PSI, instead of the puny 975 PSI cited above, while one site gives the polar bear a 1,235 PSI instead of the measly 440 PSI above. Here are some more pictures, but I posted enough of them just a few weeks ago. 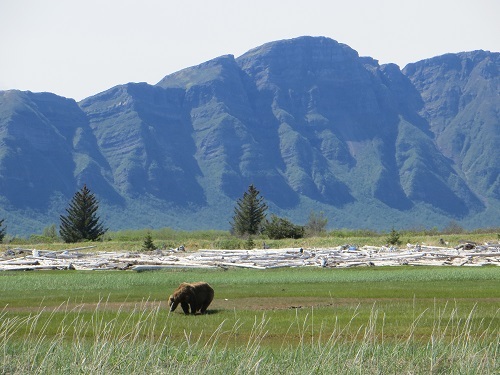 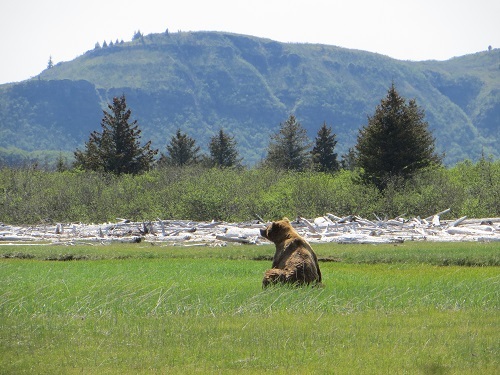 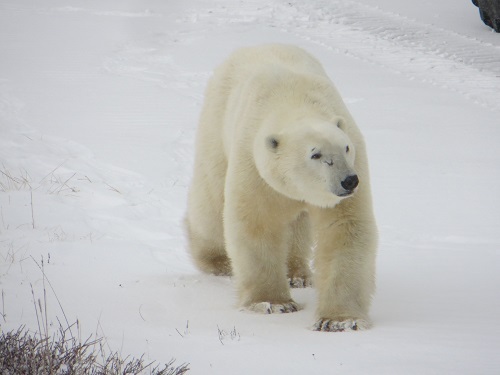 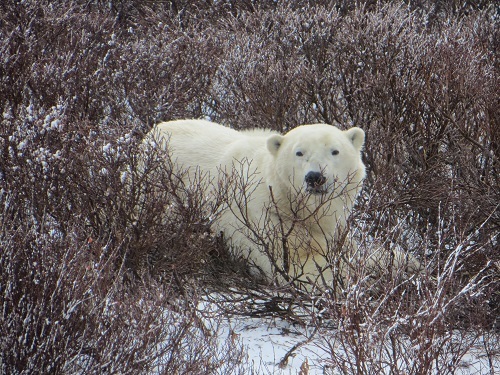 The gorilla is often listed in sixth place with 1,300 PSI. Here you can see mountain gorillas in Rwanda and a western lowland gorilla in Congo - just a couple of pictures as they too were covered in recent blogs. 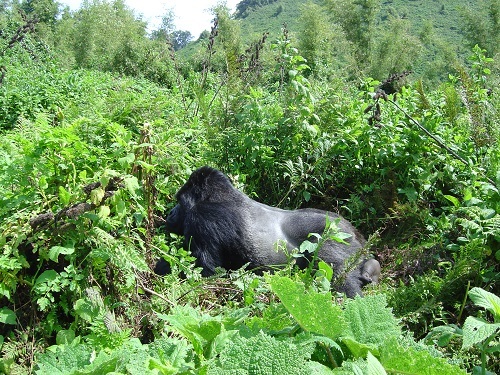 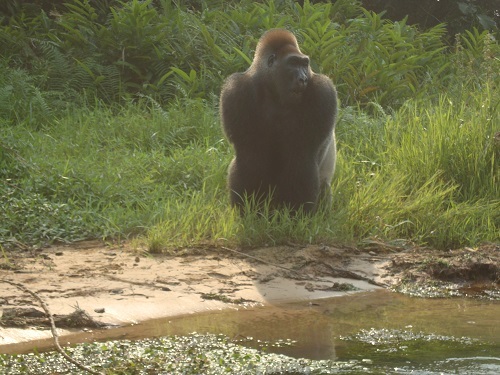 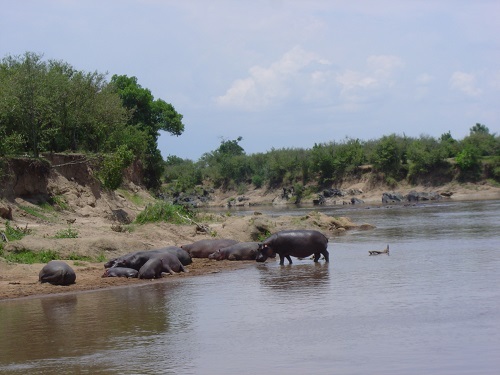 Fourth comes the jaguar at 2,000 PSI and third the American alligator at 3,125 PSI. I have no pictures of either.

Now nearly everyone gives the gold to Saltie, although listverse.com only gives him the silver with 3,700 PSI, behind its gold-crowned Nile crocodile at 5,000 PSI.

But listverse does include this proviso: National Geographic reports that if you performed a proper testing with 20-foot-long Salties, the PSI would probably top 7,000. Sherdog even puts his PSI at 7,700. Here they are again in the Adelaide River in Australia's Northern territory. Pretty impressive. 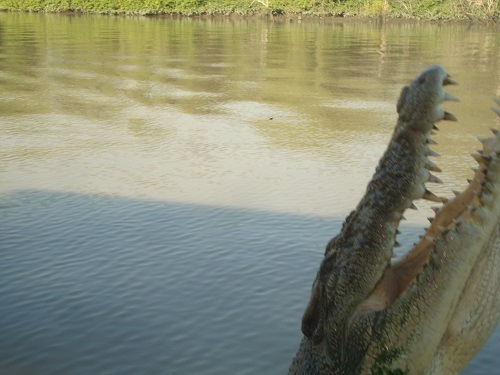 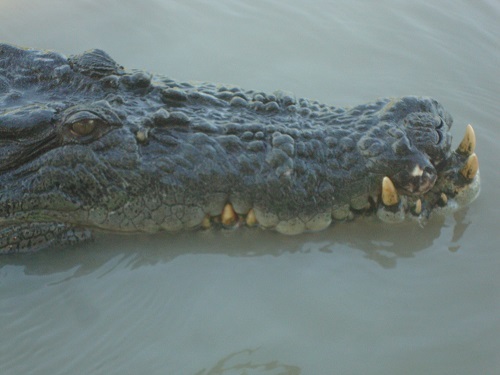