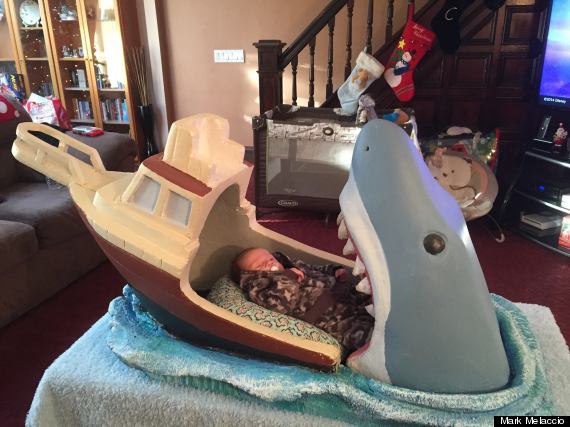 Staten Islander Joseph Reginella has a toy line called Toxic Teddies and works for a sculpture studio called Themendous, he told The Huffington Post. In addition to making sets and sculptures for theater groups, musicians (including Lady Gaga), and retail displays, Reginella also helps build whimsical children's furniture. After creating an airplane bed for a client, the sculptor "thought it would be funny if someone ordered a terrifying bed instead of something cute or mainstream," he told Buzzfeed.

As noted on Reginella's Facebook page, he fine-tuned his idea by referencing a design his buddy drew over the summer after a "Jaws"-related conversation they had at a bar.

Around the same time, Reginella learned that his best friend and fellow "Jaws"-enthusiast Mark Melaccio was expecting a baby boy with his wife Cindy. So the sculptor and honorary uncle-to-be got down to work.

Fast-forward, and today 2-month old Mikey Melaccio is the adorable recipient of a pretty wild shark attack bed. And he "loved it!" Reginella said. The bed only took about two weeks to build and just a few days to reach Reddit notoriety.

Reginella says the response has been "overwhelming" and he's even received requests from other parents who want their own "Jaws" crib. Baby Mikey's dad Mark Melaccio was also quite overwhelmed by his son's viral fame, he told The Huffington Post, adding that some people on the Internet have accused him of "traumatizing" his baby. "It's not like we are planning on using it in place of his actual crib!" he said.

Both Reginella and Melaccio said they were glad that people are "getting a good laugh" out of the creative crib and hope Mikey does as well when he grows up.

We imagine that when the baby starts talking, some of his first words might be, "We're gonna need a bigger bed."

Babies Dressed Up As Adult Careers
More:
Parentscribthe-playroom
Newsletter Sign Up
Raise the kind of person you'd like to know
Subscribe to our parenting newsletter.
Successfully Subscribed!
Realness delivered to your inbox