"This Is The End" features major stars like Seth Rogen, James Franco, Emma Watson, Jason Segel and Rihanna but it's Jay Baruchel who plays the film's protagonist, a Canadian actor visiting Los Angeles named Jay Baruchel. Baruchel's prominence in the apocalypse comedy is something even the actor admits is a surprise, especially given "my level of fame relative to the others I'm in the movie with."

Based on the 2007 short film "Jay & Seth Vs. The Apocalypse" and co-written and co-directed by Rogen and his frequent comedy partner Evan Goldberg ("Superbad"), "This Is The End" focuses on what happens to a group of actors (Baruchel, Rogen, Franco, Jonah Hill, Danny McBride and Craig Robinson) after the world ends. With the film out in theaters now, Baruchel, 31, spoke to HuffPost Entertainment about his role in the R-rated comedy, his real-life relationship with Rogen and his dream career.

You starred in the short film with Seth back in 2007 and you're an executive producer on this. How involved were you during the film's production? My involvement in the producorial capacity was that I was in charge of making sure that a certain actor named Jay Baruchel got enough sleep and got to set on time [laughs]. Seth and Evan, I think, negotiated the obstacle course that is the studio system much better than me. They're the ones who live out in Los Angeles too, so I made sure to be available whenever it was time to go. This might sound kind of hokey, but I was happy that I could give the audience a way into the story. I'm not without my problems in the flick myself -- I'm sort of holier than thou and quite a sad sack and all that shit -- but I'm as close to a sort-of everyman or voice of reason that there is in the story. I think that's tremendously important. We have so many jokes, bits and self-referential shit and literal monsters, that there was a lot of ways we could lose an audience. The thing I was most mindful of, personally, was just making sure that we kept on story; that the movie was as cohesive as it could be and that everything was as earned as it could be. So people would sit through it and not just laugh but actually feel like they had experienced a beginning, middle and end -- which is something that's unfortunately sorely lacking in a lot of movies.

Was playing a variation on yourself tricky at all? Yes and no. It's tricky in that it required me to turn off the shame receptors in my head. If I'm playing some other fucking guy, no matter how thin the distinction is, there's still a distinction. I can ultimately always say, "Oh, well, that's what this guy would do," even if he's only a shade away from me. In this case, I'm quite protective of myself, like anybody is, so there were way more times where I was like, "I don't know if I would do that." The flipside of that was that it was way easier than a lot of other jobs because I didn't have to worry about my accent and I could say whatever the hell I wanted. By playing myself, it kind of dovetailed with me being one of the producers, so there was a smaller amount of people who could tell me what I was doing was wrong [laughs]. It was great in that respect.

I've read how there were things that maybe some of the guys didn't want to say -- the line Jonah has about sucking God's dick being one of them. Was there anything you thought went too far? I need to make it clear that we all had our limits. Every single one of us with the exception of Seth, because he had to have none -- he wrote the thing and was directing it. But there was at least one thing each of us couldn't say based on our families, our religions or our upbringings. Any of the serious stuff. I'll just say there was probably stuff about my mother I wasn't super comfortable saying. There was also probably stuff about Canada or hockey that I wasn't comfortable saying.

You've been friends with Seth for years, but what surprised you about seeing Seth as a director? I was quite inspired at how hard he and Evan went at their first at-bat. From the religious content of the movie to the fact that we're all playing ourselves to how graphic some of the bits are -- how specific they are -- they took chance after chance after chance. It's hard not to be inspired by that. As an actor, I need my director to be something of a general. I need to be fighting under generals who will do absolutely whatever it takes to get the job done and will go places you wouldn't expect them to; it makes you want to go there with them. I've got nothing for respect and admiration for the two of them.

Do you want to direct as well? Oh, well! That's all I've ever wanted to do. I'd go so far as to say my interest in directing pre-dates theirs. I started acting when I was 12, but even then, I had known at 9 that all I wanted to do was direct action movies and horror movies. Even when I started at 12, my mother said [acting] would be the best film school you could go to. I'm probably the resident movie nerd in the posse, but I'm champing at the bit to direct -- before and still now.

As the resident movie nerd, what are some recent comedies or movies that you've enjoyed? There aren't a tremendous amount of comedies that I like on average. The best compliment I could pay "This Is The End" is that it's the best movie that isn't "Goon" [the 2011 hockey comedy Baruchel co-wrote with Goldberg and stars in]. So, that's where I'm coming from. One of the movies in the past while that got me excited and reaffirmed my love of the medium was "The Paperboy" -- I really, really fucking loved "The Paperboy." I think that's one of the best American flicks in a long, long, long time. I really liked "The Raid" and "Dredd," even though they're the same movie. I really liked the British flick "Kill List," which I thought was amazing. What's making me laugh, though, is "Workaholics" and "Futurama."

Everyone just assumes you guys hang out all the time in real life, and "This Is The End" kind of blows up that fantasy a little bit. How have your relationships evolved over the years? It's more evolved along the lines of age and distance. Those would be the factors that inform it more than anybody's fame or wealth or that shit. I'm 31, so is Seth. He's married; I live in Canada. We're both pretty busy: I just got done doing a play in Montreal, he just got done shooting a movie in Los Angeles. He's still somebody who is incredibly dear to me. I'd go so far as to call him blood, by virtue of the fact that I've known him since I was 18. There's a familial thing there. Like a familial thing, though, there are cousins of mine who I won't see for years on end or I'll speak to once a year. That's not where it's at with Seth and I; we're as close as we can be given the fact that we live on opposite sides of the continent.

I think that happens to everyone when they hit 30. I don't see my college friends as much as I did five or 10 years ago. That's exactly it. That's just life. It takes its natural path. I think what we've done in the movie is mine that for comedy and for story. I don't know that either Seth or I are sort of wrong in the movie. I think our respective points of view about the whole situation -- his problems with me and my problems with him -- are both right. It's probably equal parts neither and both. These are conclusions we came to based on the fact that we've separated and gone on our own specific paths -- as fucking everyone in the world does. Inevitably, it's going to come to loggerheads.

PHOTO GALLERY
"This Is The End" Photos
Download
Calling all HuffPost superfans!
Sign up for membership to become a founding member and help shape HuffPost's next chapter
Join HuffPost 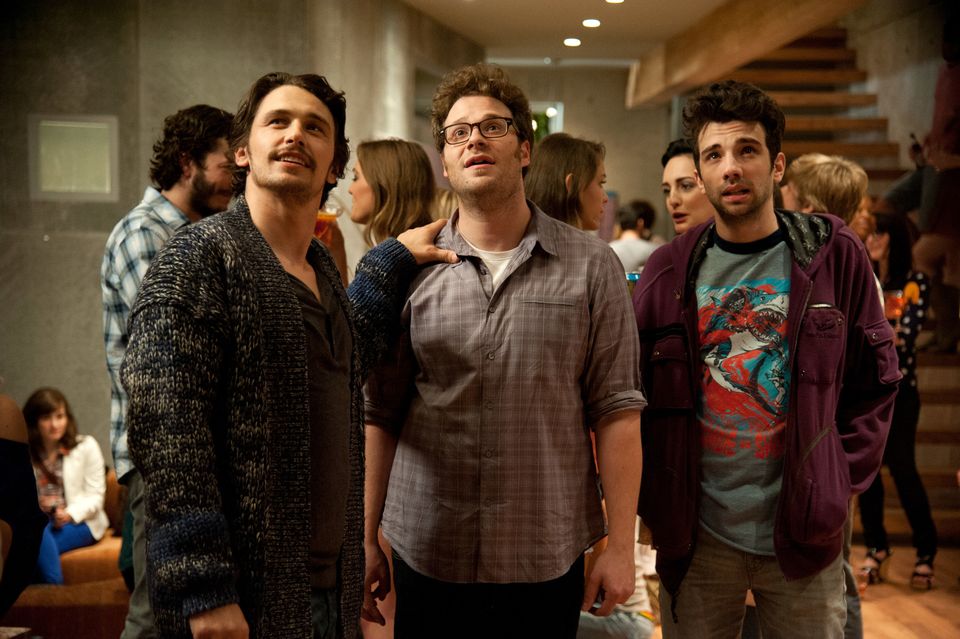