"It is the time you have wasted for your rose that makes your rose so important."
-Antoine de Saint-Exupéry, The Little Prince

The story of Jay DeFeo and The Rose is both a cautionary tale of obsession and an inspiring tale of determination and belief. DeFeo, whose work is now on view in a retrospective at The Whitney Museum, was part of a group of Beat Artists living in downtown San Francisco when she began working on The Rose in 1958. She was 29 years old and for the next eight years, she did little else but sit on a stool in her studio, smoking cigarettes, drinking Christian bothers brandy while she painted and scraped away at her vision.

First titled The Deathrose, then The White Rose and finally just The Rose, DeFeo only stopped working on the painting when an increase in rent forced her from her studio. By then it was 1966, her marriage was ending, she was in fragile physical and mental health, and The Rose had become too large to fit out the door. At over 2,000 pounds Bekins Moving Company was hired to remove the bay window where The Rose had been painted, and lower it down two stories with a forklift onto the flatbed truck. Bruce Conner documented the extraction of the painting in a short film called The White Rose and said that DeFeo was so despondent he was worried that she might follow The Rose out the open window. From San Francisco The Rose was transported to the Pasadena Museum of Art, where DeFeo followed it to continue working for another three months. It was briefly shown in 1969 but, unable to find a permanent museum home, The Rose ended up in a conference room at the San Francisco Art Institute. In order to shore it up and keep it from deteriorating -- painted in oil some art restorers thought it would take over 100 years to dry -- The Rose was stored in the plaster mold, behind a temporary wall, for 25 years.

In 1989 DeFeo died of cancer never knowing what would happen to The Rose, though she had faith, friends said, that it would one day be exhibited. Six yeas after her death The Rose was resurrected from its cocoon by the Whitney and finally displayed. By then the story of The Rose had reached such legendary proportions, many doubted it would live up to its mythical history. But The Rose is a myth for a reason, and it not only rises above the romantic "folly" of its creation, it soars far beyond it.

At nearly 12 feet high and in places eight inches thick, The Rose was constructed from layer upon layer of built up and scraped away black and white paint. DeFeo added mica chips to the paint and so The Rose has its own interior light. Set off against a black wall, lit from both sides, as it was when she created it in the bay window of her studio, The Rose has a sacred presence. The image, a starburst shape that resembles a crucifix, the center of a flower, a Rose window, even a vagina, is banal, and that's one reason the painting works so well. Like any great work of art, it transcends its form. Think of Rothko's tablets that far surpass their square on square structures. The bottom of The Rose is heavy, as baroque and billowing as the full skirt of a Victorian petticoat; the center is cinched, concave and vulnerable like the ribcage of a newborn. At the top of the painting the image begins to break apart, like petals dispersing on a gust of wind or the feathers of a bird in flight. 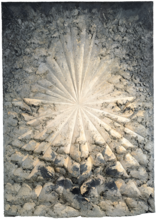 Begun during the period when Abstract Expressionist painting had reached its zenith, and not completed until the age of Pop and minimal art, when artists had begun not only to mass produce their art, but to create works they sometimes never touched. And so The Rose stands outside mainstream art movements. Its imagery is symbolic and familiar yet the rubble of its topography is more textured than a Dubuffet.

After The Rose's departure from her life, DeFeo's next few years were fallow. She suffered from depression and ill health, perhaps brought on by the toxic lead in the mica chips that she'd worked with on The Rose. Eventually, she created another strong body of collages, photographs and paintings. In 1978 she wrote, "Always The Rose is present in my imagination as a kind of central core of my life's work."

Across the room at the Whitney is a large graphite drawing DeFeo made of her own eyes right before she began work on The Rose. DeFeo said that The Eyes envisioned The Rose. These eyes were the lens through which DeFeo first experienced The Rose. They are outlandishly large and instead of pupils, their centers mirror the starburst configuration at the center of The Rose. The eyes are the gateway to The Rose. Like a figure in a Greek myth, these are the eyes of a giantess, of a person capable of losing herself in a massive work of art for close to a decade, leaning in so far she nearly lost her way, yet emerging from the maze of her own creation with what Thomas Hoving, the former director of the Metropolitan Museum, cites as one of the greatest works of art of Western Civilization.

I have experienced The Rose now three times, and I continue to be amazed at how it unfolds. DeFeo poured so much of herself into The Rose that the painting almost breathes with life. As the man standing next to me at the Whitney said to his friend, "It is hard to make a 2,000 pound object float." He too felt DeFeo's presence, her utter determination to give not only life to her creation, but also wings.