Jay-Z's next album, "Magna Carta Holy Grail," is quickly becoming a who's who of the music industry.

The 43-year-old rapper already publicized "Part II (On the Run)," a duet with his wife Beyonce, a track with Frank Ocean appropriately called "Oceans," and a mouthful of a song with Rick Ross called "FuckWithMeYouKnowIGotIt."

The latest track to be teased off of the upcoming "Magna Carta Holy Grail" features some of the biggest names in the business. Called "BBC," the song has Jay-Z collaborating with Nas, Justin Timberlake, Beyonce, Swizz Beats, Pharrell, and Timbaland. Hov, who is partnering with Samsung for the release of "Magna Carta Holy Grail," debuted the lyrics to "BBC" this week through a Samsung app. The company will provide early copies of the album to certain users of the Samsung mobile software.

“It’s Rat Pack-ing,” Nas told Vibe about the collaboration. “We were definitely recording. 'Magna Carta' was going down. Some Justin Timberlake new album stuff was in the next room. Timbaland. D'USSE. Hennessey. Good times.”

Due out next month, "Magna Carta" is Jay-Z's 12th solo studio album. The project includes 13 songs and two bonus tracks.

Check out the lyric sheet to "BBC" below. 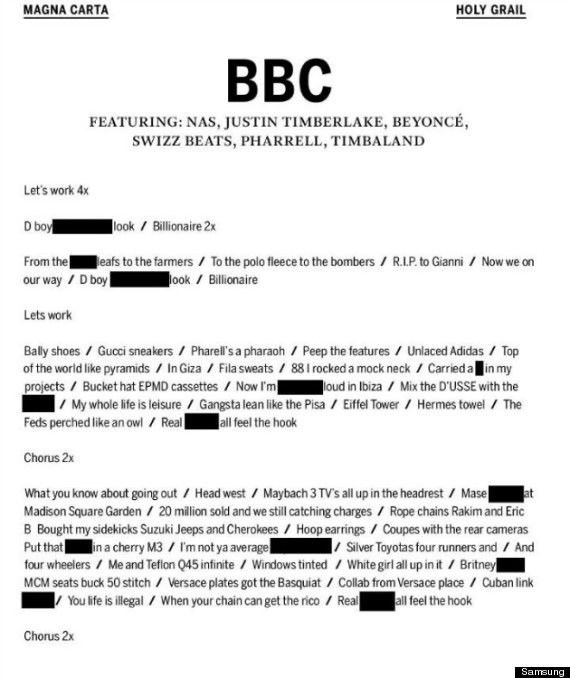