Lithe, sprightly, and animated, Jayme Odgers' Paint Tube People are the sort of things Alexander Calder would have made had he played with empty paint tubes and stuff on his work table instead of pliers and pieces of wire. They describe dystopian dioramas, Liliputian stage sets that feature figures in situations that equate to plastic equivalents of James Thurber's New Yorker cartoons. In spite of their simplicity - no, because of it - they exist within their own Toy Story space, coming alive when the lights go out, when the room is vacant and they think that no one's watching. They sally forth, mock-heroic and quixotic, as if nothing was unusual or out of the ordinary, clueless that their sense of proportion is way out of whack. Acting out tempest in teapot scenarios, they seem perfectly unaware that they're being watched, which means that they're not self-conscious. Because they're not posing, their reactions to the predicaments of life ring sincere and genuine, honest and true. 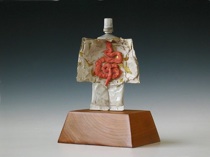 These pieces represent the application of whimsy to environmental concerns, resulting in a genre that can be called green humor. People who don't paint would overlook these squished out, rolled up, empty tubes of paint that litter studios as rubbish. Odgers doesn't. With some clever recycling derring-do and a strong dose of whimsy, he resurrects the rejected, which makes perfect sense: if ars longa, vita brevis, why not the same thing with the materials that made the paintings? 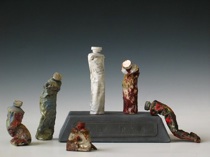 "The Adoration of Permanent White"

As a designer and an artist, Odgers sees how things piece together, how they're composed. He finds pleasure and joy in the picayune and the mundane, the pedestrian and the unexpected. With acumen and insight, he understands patterns (visual, behavioral) and from these patterns he crafts narratives that encompass the whys and wherefores of the human condition. Not only he can make significant statements from insignificant material, he can also make calumny and bluster appear effortless and obvious.

He predicates this dynamic on various oppositions. He opposes the high-minded tradition of paint (Jan Van Eyck, et al) with a whimsical poke at it. The aesthetic nature of art with the arte povera of material. Big ticket auction items with things that could have come from a Dumpster. Mostly, though, it's the Life Sized pitted against the Diminutive that animates the work. Though the figures are the size of a matchbook, they address our life-sized peccadilloes and imbroglios. Not in the least aware of us the viewer, each depicted figure goes about their business, reacting or responding only to what is in front of them. POV-wise, we're Peeping Toms on these Teeny-Weeny Thumbelinas. 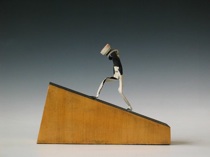 We can laugh at their ingenuity and humor, but we respond to their message. We are in dire need of whimsy and this work supplies it. From it we glean a lesson in the management and assuaging of ego: one is little when one gets too wrapped up in his or her own personal matters. The work provides a means by which to appreciate how a little distance on - and a lot of humor about - things allows one the philosophical perch from which to comprehend some Big Picture. 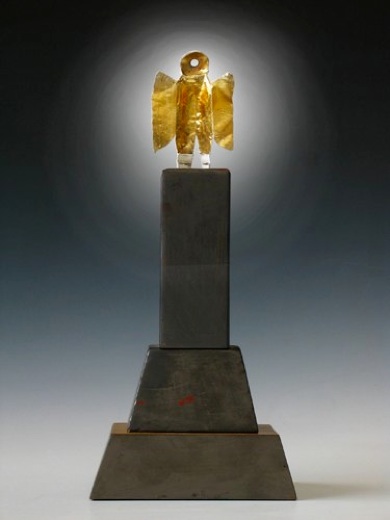