This is the thirteenth installment in HuffPost Gay Voices Associate Editor JamesMichael Nichols' 30-part series "After Dark: NYC Nightlife Today And Days Past" that examines the state of New York nightlife in the modern day, as well as the development and production of nightlife over the past several decades. Each featured individual in this series currently serves as a prominent person in the New York nightlife community or has made important contributions in the past that have sustained long-lasting impacts.

The Huffington Post: You've been involved in the NYC queer nightlife scene since the 1960s. Can you describe your journey to becoming the legendary artist and performer that you are today? Jayne County: It was a long, bumpy road that sometimes ended in dead ends, but I just kept driving on and on. I played the "straight" rock clubs with a full band -- never played "gay" clubs, so to speak. I always just kept on doing what I knew I could do best. Writing songs, recording, performing; it all came as natural to me as black eyed peas and corn bread! I mixed my early experiences of growing up in Georgia with my psychedelic, glam and punk rock pioneering tactics and shook them all together with my trans and gender-bending theatrics -- then presto! There I was! Wayne/Jayne County: transgender, rock and roll, punk rock pioneer! 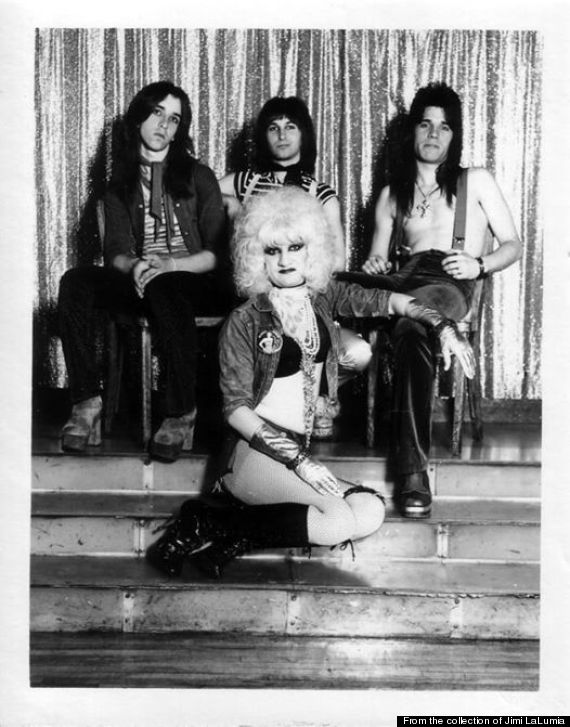 How important was your time involved with the Andy Warhol factory? Can you describe this period and the way it shaped you as an artist? My time hanging out with the Warhol crowd was instrumental in my development as both an artist and a weird underground character. I hung out with Candy Darling, Jackie Curtis, Holly Woodlawn and Leee Black Childers. The main hang out was Max's Kansas City over Park Avenue South near Union Square. The back room of Max's was famous for being the watering hole of the NYC in-crowd. Like the song says -- "Anything Goes," and boy did it ever! It was a mish-mash of underground culture: artists, singers, poets, rich people, poor people, drug dealers and LSD dropouts. It was a creative, cesspool of craziness brought together in one big bowl of mixed vegetable '60s and '70s decadence.

What kind of work do you tend to produce? How would you say nightlife influences or informs your art? My work and music usually contain true life experiences set to catchy tunes and chorus lines. My best songs are usually written when I'm pissed off and angry with someone; a lot of my experiences in NYC nightlife have ended up in one of my songs. I wrote "Man Enough To Be A Woman" after sitting at a table at Max's with underground glam sensation Jobriath. He gave me the idea for the song, "If You Don't Wanna Fuck Me Baby, Baby Fuck Off." It was written after one of guitar players kept "prick teasing" me -- also "Bad In Bed" and "Mean Motherfucking Man" and many others. Some were written from a sheer political or anti-religious stance, like "Storm The Gates Of Heaven." "Transgender Rock And Roll" was written about the club Jackie 60's and it mentions Lady Bunny, Chi Chi and Johnny.

When and how did you eventually decide to transition? My decision to transition came from the feelings I've had since I was a very small child. I was never a little boy but always a little girl. I never felt male or what society assigned as "male" and I always knew that I was not like everybody else around me. When I was a small child I dressed in female attire every chance I got. I hated getting stubble on my chin and it extremely upset me -- I felt like an alien on a strange planet.

In my late teens in Atlanta I hung out with all of the screaming queens and drag queens. We hardly knew the word "transexual" and everybody back then in the mid-sixties functioned under the word "gay." There weren't all of these extra divisions or these identity groups fighting for power against one another. Everyone was called "gay" and no one had a problem with it. We all hung out in the same bars together: the gay boys, the gay girls, the drag queens and trans people who had never even heard of the word "trans." Back then it was called "living in drag." Some queen would say, "Oh did you hear about Miss Coco? She's living in drag now! She's becoming a real woman!"

Do you identify as trans? If not, how do you identify? What does this identity mean to you? I have identified as trans for awhile now, but the politically correct words that are approved for usage by idiots living up on "Transolympus" changes every time someone farts! I did identify as transsexual in the '70s and '80s. But that word is definitely out of style now and seems too much of a medical term anyway. I like transgender, myself, but I am a firm believer in one using self-identifiable terms. I'm a bit pissed off at the "PC college" crowd at the moment. I don't want to go on a rant about it because I've already done that, but I think this stupid PC crud about the word "tranny" is a pile of possum crap. I was even kicked off of Facebook for using the term "tranny" and making fun of the "shemail" fiasco. So I won't go into it again. Right now I am using the terms transgender and gender variant. I think people make too much ado about terms and wording -- it's self-absorbed. There are millions of men and women in the world. Why identify as either one? I love gender variant but I'm used to transgender, which fits pretty well. 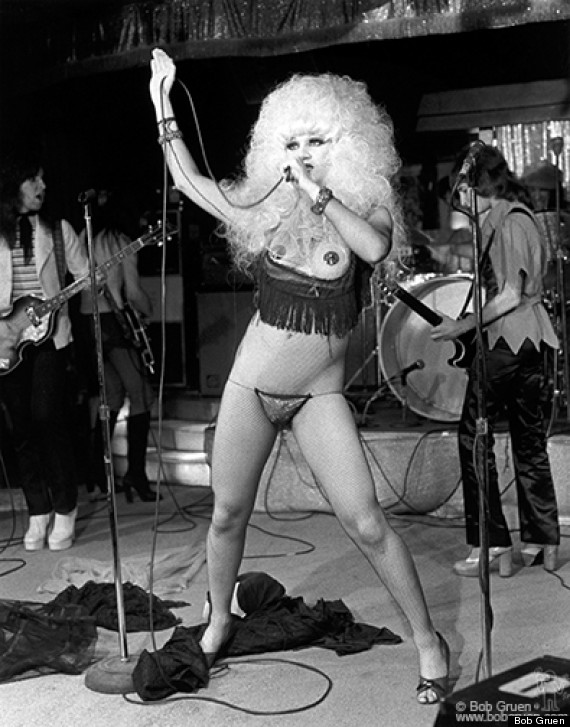 How do you see what is happening now in New York nightlife today as building on a historical legacy of artists, performers, musicians and personalities over the past decades? Oh, nightlife in NYC will always be fabulous because it's made up of the great artists and scene-makers of today that will become the nightlife heroes of tomorrow. Nightlife is still going strong -- it's just changed. A new generation of stars and scene-makers are trying new, and sometimes even old, things in a different way every night. NYC will always be the city of dreams! Sometimes things can be built right on top of some of the old, past nightlife history that some of us fondly remember and long for. It just keeps on building right on top of all the great history that NYC has given us.

From The Stonewall and The Sewer, From Max's and CBGBs, Dancerteria and The Peppermint Lounge, The Mudd Club, Save The Robots, The Pyramid, Jackie 60's, Coney Island High, The Limelite, The Continental, She, The Boy Bar, The Cock, The Bowery Bar, Life, The Squeezebox and on and on! And the NYC legends that have put NYC on the nightlife map like Chi Chi and Johnny, Mistress Formica, Miss Guy, Mario Diaz, Michael Schmitt, Linda Simpson, Cherry Jubilee, Lady Bunny, Mx Justin Bond, Don Hill, Hilly Krystal, Peter Crowley, Jim La Lumia, Mickey Ruskin, Andy Warhol and his whole crew and so many, many more.

We live in an age where queer history seems to be increasingly forgotten. Do you think this erasure is dangerous? Queer history is so important because it often takes in and covers other history that it comes in contact with. Queer history is OUR history! Everyone's! It's all related in the way that whatever happens within the scope of queer history affects our entire culture -- television, films, books, music. It all contains some elements of queer history. It should be taught in our schools right alongside of black history and minority studies. Take out all of the things in our society that gay people have contributed and you would have one dull, boring world. Too bad that we had to kick and scream our heads off at The Stonewall Riots to even get noticed. But it had to happen! It was all a sign of the times!

I am so proud to say that I was there for The Stonewall Riots.

You have never been one to shy away from expressing your opinion and making your voice heard. What do you have to say to your critics? To my critics I say: "You've never been able to shut me up, and you never will!" And, "If you can't take it, go live on a cave." And, "Put an egg in your shoe and beat it!" And to some of them, "If you don't wanna take a walk with me on my meat rack, then get the HELL outta my breadline!"

What projects are you currently working on? In September I have a live DVD coming out: Wayne/Jayne County and The Electric Chairs, live in Germany from 1978. It's high quality, the sound is amazing and the band is in fine form. It's a straight-ahead rock concert presenting a lot of the songs and music that I am known for. I'm also continuing my art and have some art shows coming up in Atlanta and NYC. My music can be found on iTunes and Amazon and most other digital formats and presentations. Also very important, I run a "cathouse" to help homeless kitties. It's called Auntie Jayne's Cathouse. Anyone wanting to help can reach me on Facebook!

What do you see within the future of New York nightlife? I think NYC nightlife is in good hands at the moment. It's a different time. We can't expect everything to be like it was yesterday. Yesterday is gone! Tomorrow is waiting for all of the young new artists to take hold of and create something new and wonderful so that we all can continue to grow and experience art, music and an exciting nightlife scene that will hopefully once again make NYC the center of the universe. NYC nightlife is here to stay. It can sometimes go up and down like a roller coaster but it will always keep right on a rolling. Long may it reign! Thank you -- sincerely, Jayne Fucking County.

For more from Jayne County head here to visit the artist's website. Missed the previous installments in this series? Check out the slideshow below.