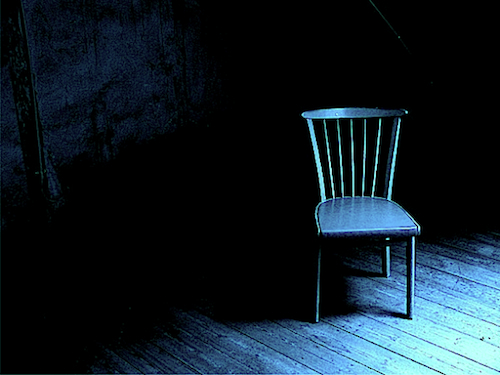 I've written about what I call "the education fallacy" in earlier posts:

The solution [to building a sustainable audience base for jazz], we've all been told ad nauseum, is "Education! Teach jazz in the schools, and we'll be creating new audiences and supporters for the future." This theory rests on a fallacy -- namely, that jazz is such a timeless and appealing genre, that exposure at a young age will create new fans and the music's future will be assured. We have ample evidence to assess the education theory, and the evidence is quite clear -- it is a complete failure. After over 40 years of Jazz Education, with enormous public and private support, we see no indications of a surge in supporters and fans, but we have seen a huge increase in the number of practitioners.

In a nutshell, it refers to the idea that classical music and jazz are suffering because we're not educating our children properly. It's an easy explanation for the art music audience malaise. We in the arts community love it because it places blame on the education system, or the government, or other nefarious entities who are plotting against Mozart, Mahler, Miles, and Monk. Conveniently, it also absolves us of responsibility. All we need to do is occasionally invoke "Education!" as the answer, and we can continue along on our merry way, using strategies and models from bygone eras that haven't worked for decades and aren't likely to work in the decades to come.

If you're thinking that there's no problem with jazz audience maintenance and development, then consider the fact that the 2012 Jazz Education Network conference in Louisville featured multiple sessions that were focused on something called the Jazz Audiences Initiative (JAI). This initiative featured a comprehensive analysis and report by WolfBrown on the demographics of those attending jazz concerts at several major venues across the country. The study was commissioned by the Jazz Arts Group in Columbus, OH, and was funded by the Doris Duke Charitable Foundation. This intense focus on audience development can only mean one thing: the jazz audience is disappearing.

Jazz Education is particularly well-suited to assess the education theory in regards to audience development. The reason for this is that before the 1960s, jazz was not a regular or common feature of the education system, but by the 1970s (after the founding of the National Association of Jazz Educators in 1968), high school and university jazz programs were proliferating all across the U.S. and Canada. By the 1980s, Jazz Education had grown tremendously. Here are some statistics from Jazz In America:

It's hard to then claim that the government and the education system (and private donors who have helped to fund university and other programs) haven't done enough. Hundreds of millions (possibly billions) have been spent on jazz education since 1970, but those untold sums did not deliver a sustainable jazz audience. The education theory as it pertains to jazz is a failure in terms of its ability to generate an audience base for the music.

Now, let's look at attendance at classical music performances. The following graph is part of a 2009 report from the League of American Orchestras which looked at the number of people from seven "generational cohorts" who attended classical music concerts in 2008. 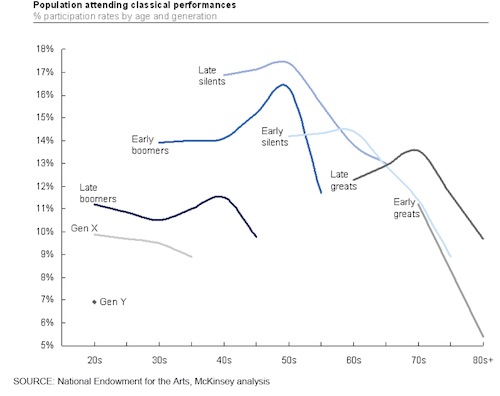 In his blog for the New Yorker, Alex Ross featured this graph in a post entitled The Fatal X which refers to the fact that Gen X has no uptick in participation rates as its members enter their 30s and 40s. The report from the League of American Orchestras describes the situation as follows:

If recent participation trends remain unaddressed, the audience for live classical music could decline by an additional 2.7 million people, or 14 percent, by 2018, as a result of projected trends in demographic momentum.

I'm going to use some of the data from this graph, but view it from a different perspective. By graphing the 2008 classical music attendance percentages of each generational cohort,* along with a brief timeline of when various arts and entertainment technologies/media came into common usage, we see a clear correlation: 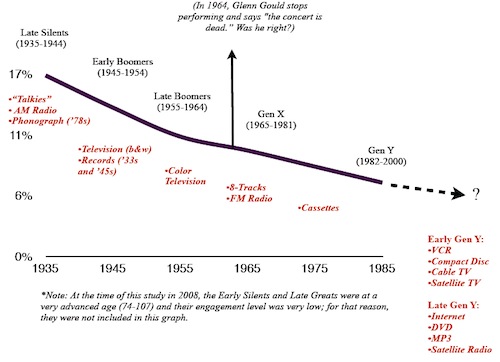 While not a comprehensive media history, this graph shows that as the arts and entertainment options outside of traditional classical and jazz venues (concert halls, recital halls, jazz clubs) increased dramatically in quality and quantity, the cohort attendance rates decreased. As those options mushroomed between 1980-2000, the attendance rates continued their downward spiral until we hit Gen Y, of whom only a paltry 7 percent attended a classical music event in 2008. In the last 12 years (2000-present), these options have only increased, with HD Media (including the outstanding Metropolitan Opera HD broadcasts), high-speed internet, home theatre systems, on-demand viewing, and other online options becoming more available and more affordable. It appears that as our home arts and entertainment options get better and cheaper, we're less interested in going downtown and paying for parking, tickets, and $9 for a glass of wine just to be annoyed by someone texting or chatting or unwrapping a cough drop in the middle of a Mahler 3rd Movement. This shouldn't be a surprise to anyone.

On the education spending issue, it's common to hear musicians say, "well, we're not spending enough, that's why we're not building classical music audiences -- we need to spend more on education." To answer that, I return to Jazz Education, where we went from spending very little, to spending hundreds of millions, with nothing to show for it in regards to audience development. Why did the jazz audience decline, not grow, as the spending rapidly increased? Is there any reason to think that more spending would succeed with classical music where it has failed with jazz?

The music education system is very good at helping to create great artists and ensembles, and it does so consistently and regularly. (Read the biographies of the members of our fine orchestras and jazz ensembles, and in most cases, you'll see references to the excellent colleges, universities, conservatories, summer programs, and high schools, in which they received their training). Music and general arts education, (particularly programs for young students such as, for example, Education Through Music), are also very effective in helping students' intellectual and social development, so there are certainly excellent reasons to maintain and strengthen this part of our education system, but significant audience development does not appear to be one of them.

But if the system can succeed with such lofty goals as creating great artists and increasing intellectual development, why can't it succeed in the more mundane task of creating a mediocre audience base? Intuitively, it seems like such a great theory -- we create an audience base by using the education system to mold hearts and minds to love what we love. Wrong. You don't need to be Paulo Freire to know that one doesn't simply pour information into an empty vessel and then reap desired outcomes. A human being is not a piece of clay that can be so easily molded to provide us with a ready-made audience member--you can lead children to Water Music, but you can't make them love it.

In the blog post about jazz that I referenced earlier, I suggested that "... music is a cultural artifact, and the culture has moved on [from jazz]." The education system cannot overcome the culture, and by the 1970s, the dominant culture was moving further and further away from jazz. No educational intervention could have changed the downward trajectory.

The education system can certainly expose students to classical music and jazz (hopefully enriching their lives by doing so), but it cannot make them love the music. Many, I'm sure, will listen to some jazz and classical music throughout their lives, but they will probably listen to it at home and in their cars, not at performances in traditional venues. If we're lucky, a few (outside of those who choose music as their profession) may even develop a deep relationship with the music from this type of exposure, but probably not in large enough numbers to make a difference in terms of creating a sustainable and adequate audience base. The best we can hope for from the education system is for it to instill a modicum of respect and/or understanding of what we do in music; to ask for any more than that is beyond what an education system can be expected to accomplish.