For jazz vocalist Nicole Henry, the story has indeed been written. She is the genuine article, the dream at last come true, the pretty girl in the melody that haunts you -- night and day. Since her 2004 debut CD, The Nearness of You, Nicole Henry has been the artist to watch in the world of Jazz. That same year, HMV Japan boldly declared her as "Best New Jazz Artist." Her subsequent live appearances, along with the popularity of her recordings and their play on national jazz radio stations, so increased the fan base that by 2008 her album, The Very Thought of You placed in the Top 10 of Billboard's jazz charts. In her most recent album, Embraceable, Nicole reveals powerful vocal chops in John Stoddart's "Even While You're Gone" and the richest levels of musical elegance and intimacy in a stunning arrangement of "Embraceable You" with pianist Gil Goldstein.

Last week, Nicole Henry made her long-awaited west coast / San Francisco debut at the Rrazz Room in the Hotel Nikko. The evening before, I attended an intimate reception for Nicole in the home of two of her long-standing admirers, Kevin Surace and Erica Rogers. Their plush living room with its fabulous acoustics had been converted into a cozy cabaret where Nicole and her accompanists -- bass player Sam Bevan, pianist Frank Martin, and Kevin Surace on drums -- presented a set that captured her extraordinary musicianship and vibrant personality and embraced us with fiery sensuality and joy. Conclusion? That predicted time of greatness has arrived. Nicole Henry emerges hands down as this generation's First Lady of Jazz. 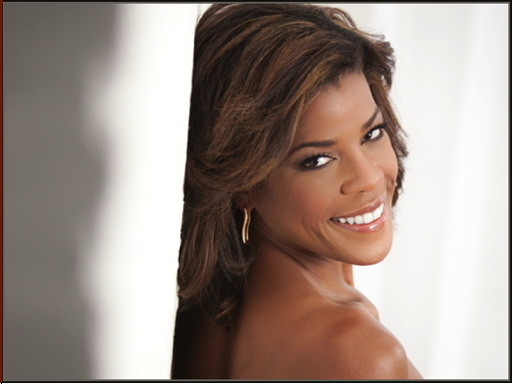 I began our pre-concert interview confessing my obsession with her rendition of "Teach Me Tonight" by Gene de Paul and Sammy Cahn. This totally erotic number has been around for nearly 60 years and is arguably one of the most challenging in the canon of the American Songbook. Starting with "the ABC of it" and rolling down to "the XYZ of it" -- as Mamma Rose in the Broadway musical Gypsy would put it, "Ya either got it, or ya ain't!" Well, Nicole Henry's got it and the word is spreading around the globe. So, I borrowed my first question from Cary Grant, "How does a girl like you get to be a girl like you?"

The best part about my job," she responded, "is that my script is already pretty much written. A song like "Teach Me Tonight" is probably a dream of most women to sing. Everyone wants to be a Marilyn Monroe -- you know, for a moment. Or seductive, or a little tease. I have the best stories to tell every night. And I just pick whatever story I want to tell. So how to answer your question? Just love the lyrics. People do say "Teach Me Tonight" is the hardest song to sing. I don't look at it like that. The hardest song for me to sing is the one I can't figure out from my perspective. Like, who am I in this song today? Or -- Ooh, I am not feeling it, I am not connected. That's the hardest song for me to sing. When I sing the "National Anthem" -- or any song I'm connected to -- I know where that story is coming from, where it is in my heart, and who I am telling it to or dreaming of. That's easy." 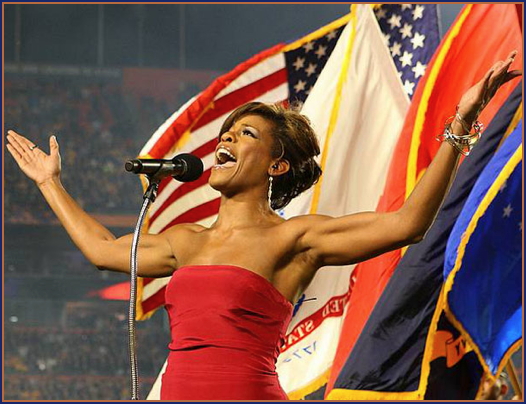 As a singer, I know the "National Anthem: has a range of an octave plus a major fifth. The San Francisco Opera opens this week and the Symphony opens on the 19th. Both orchestras play the National Anthem at opening night performances and the audience is invited to join in. It's played in the key of B-flat, which means the song sails up to High F on "red glare" and "free". I'm warming-up those notes now.

"I notice all the Low Fs you hit in your recordings -- like the entrance into The Very Thought of You. That note is way below the "say" in the "National Anthem" over at the Opera House. Where does this range of yours come from? When did you start surrendering your life over to your voice and to concentrate on performing?"

"It started in 1996 when I was in college and first stepped on-stage. A DJ asked me to sing some songs at a rave in Orlando. He said, "I'm going to record these tunes and we're going to put a show together." It was scary. It was the first time I had ever gotten on stage and had to sing one song after another after another. But the only scary part was in-between the songs. What happens in the dead spaces?"

Back at the party, nothing else needed to happen after her first number, "On the Street Where You Live" -- except, perhaps, my coming down from a cloud several stories high. The "over-powering feeling" was the sensation that I'd never heard this song before, and never been down that particular street before. She followed it with the 1968 hit by Dusty Springfield, "Just a Little Lovin'." With lyrics going in the direction of, "Oh, in the morning, nothing turns the day on, really gets it dawning...make a little bit of lovin'... it's so good, it's so good," in front of a small audience in a living room, the effect was captivating -- totally up-close and personal.

"Throughout my childhood I sang at talent competitions, just to get a chance to sing. I sang at church and school choirs. So I kind-of knew I had a voice and people would say they liked it. I thought they were just being nice. And I thought, "OK, I can sing. That's great." But it wasn't a big deal. I'd sing the National Anthem at every football and basketball game in high school - which was fun. And I was a cheerleader. So, I was there. But when I did the competitions, there were stage moms who were, like, dying for their kids to win. I was never dying to win. I just loved singing and that's why I was there. I actually felt bad when I won, because it was not important for me to win. I just wanted to sing."

"What were you singing at these competitions?"

"Whitney Houston songs, like "Savin' All My Love For You." We had no idea what that meant."

"Of course not. But that's the ticket! Your audience and your judges wind up projecting onto you that you do understand what you're talking about. And even though you had not experienced those adult relationships, the pictures are very clear."

"Yes. I have to credit that to my listening to Aretha Franklin. Any of those women from the '70s that my parents used to play. People were feeling the music. Which is not to say they don't feel the music today. But there was something organic about it. There was instrumentation, strings, a horn section. Something was there."

"Substance," I replied. Nicole included James Taylor's "Fire and Rain" in her set. It will be part of her new CD, due next January -- recorded live at Feinstein's in New York City. The song's lush arrangement was fashioned by guitarist Adam Rogers who also recorded it with her at the week long engagement. The album celebrates the '70s.

"I grew up listening to Aretha Franklin," she admits. "My parents played her '70s Gospel album, Amazing Grace. I learned what feeling was. You could feel Aretha Franklin -- sing about God. When you hear people sing Gospel, it's just on another level. I learned you have to tell a story when you're singing. Otherwise, what's the point? When Hilary Clinton was running for president, she came down to Miami Beach for a breakfast and I had to sing the "National Anthem." This was, of course, after 9/11 and Bush is in office -- and there's just a lot going on politically for me. It wasn't the first time, but I was more politically passionate. That morning, I really felt the "National Anthem." I felt from Line 1, "Oh, say, can you see" -- the whole song is a question. Can you see this country and what is going on? What we're fighting for? What we stand for? And if you can't see it, then you need to make it be what you want it to be. So, it was like -- Whoa, OK! I'm not for war, so I don't enjoy singing about the rockets' red glare. But this is our history."

On Friday the 7th Nicole will be in Miami Beach, upstairs at the Van Dyke Café, and then off to Russia to do 16 concerts. "Who will play for you?" is a question I ask all singers who tour, especially to other continents.

"The promoter there is actually a bass player," she responded, "and there are a couple of great pianists who will be joining us -- one from Ekaterinburg, the other from Novosibirsk, and I'm bringing my own drummer. It will be exciting."

"I would find it scary -- to not have the same musicians with me wherever I went."

"It is scary, because so much of jazz is interpretation. Even with the drummers -- you can tell them certain hits you want them to do, but not everybody reads music, not everybody is going to pay attention. Some may say that this is Jazz and 'I'm going to play it the way I want to.' Others say, "You have to be more Diva." So, when I'm on the road, I've learned to sometimes direct my band -- to be the musical director / psychologist / manager and Chick Singer. As a person -- and going back to the subject of competition -- I never really put myself first and made myself the center of attention. But as an artist, that's what you have to do. Whenever I talk to young artists, I tell them they have to know what they want and to go for it. 'Don't let anybody tell you you're wrong or you don't know what you're talking about. You just have to say what you need and go for what you need because that is what makes you successful.' Otherwise, it's luck." 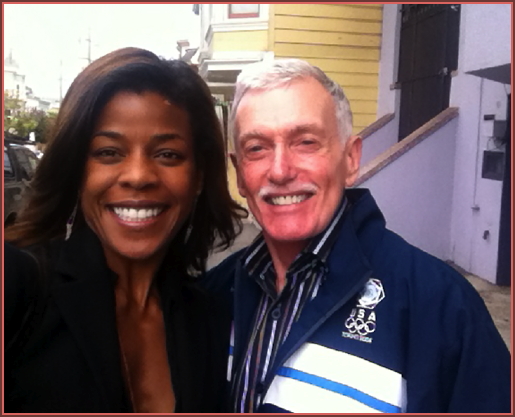 "What's your favorite song in the whole wide world?"

"Oh, there are so many! Songs to dance to, make love to, to be angry about."

"What is the one song that might go through your head everyday, no matter what?"

"'Moon River.' That song can bring tears to my eyes anytime."