(Editor's Note: This article contains explicit language that may be offensive to some readers)

When I called J.B. Smoove, the actor, writer and comedian best known for playing foul-mouthed freeloader Leon Black on HBO's "Curb Your Enthusiasm," I had no idea, even from the very beginning of our phone call, whether I was talking to J.B., his character Leon or someone in between:

And thus began the strangest interview I have ever done.

Smoove, as audience and YouTube favorite Leon Black, just finished Season 8 of "Curb Your Enthusiasm," the Larry David-helmed sitcom that has made him famous. A former writer for "Saturday Night Live" and "Late Night With Conan O'Brien," Smoove is announcing the launch of a new comedy site he co-founded, TheRuckus.com (named after one of his most famous "Curb" catchphrases: "I gets mine, Larry. I brings the ruckus to the ladies."

The ruckus, in the case of his website TheRuckus.com, is anything funny. It will exist as a portal for J.B. Smoove's comedy and other comedians who make him laugh, as well as user-submitted content that passes the Smoove test. Or in the words of TheRuckus.com:

What is The Ruckus? Well, it’s a "know it when you see it" thing. We can say it's a way of being. Confident. Positive. Edgy but not nasty. Aggressive but not insulting. When you Bring the Ruckus, you're living at full speed.

I talked to Smoove for about 20 minutes; and of those 20 minutes, I'd say I spoke for about 45 seconds, with the comic's breathless, profane, free-associative answer to a single question filling up the rest of the time. At the beginning of our talk, I gave Smoove a simple prompt: What apps do you wish you had on your smartphone?

What follows is, at least partly, his response; for reasons of space and propriety (and an unfortunate recorder malfunction), some answers have been slightly edited. It is very, very much not safe for work.

Without further ado, here are the apps that J.B. Smoove wishes he had on his smartphone: 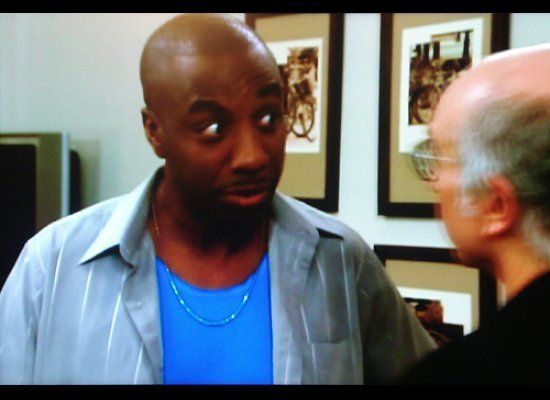 1 / 8
Censorship App
I wish my phone could beep me, when I'm around kids and shit. I don't know when to watch my language. I don't know when a woman is holding a baby in their hand, I don't know when there's kids around, when there's old people around. I want a profanity app that can automatically beep my words. I don't gotta think about that shit. So BLEEP that. I want something to beep me so ... I can keep my energy, still be expressive, but not be worried about offending any ears. <br> Kids are like a sponge, man. Kids and old people are like sponges and shit. Kids remember shit and old people are offended by shit. So I need a bleep app so that I don't offend any kids or old people.
StillSmoove.com