LGBT advocates are praising J.Crew after the brand featured a gay couple in its newest catalog, ABC News reports.

The chain's "designer Somsack and his boyfriend, Micah" pose in a feature entitled "The Highlight Reel: the latest collection, modeled by some of our favorite guys and those they hold nearest and dearest," along with other impromptu models like J.Crew's in-house stylist and his baby boy, the head of the design team and his dog and the photographer's husband and their tween daughter. Real, live, normal people! Just like us!

Bob Witeck, CEO of Witeck Combs, a P.R. firm that focuses on LGBT clients told reporter Susan Donaldson James, "I am loving it. Abercrombie and Fitch have gotten away with selling around men without clothes and they never told us how they were related to each other. Obviously, it's time to bring them out and it's exciting."

He noted that the ad doesn't sexualize the couple and speaks to a more "self-aware audience." ABC News adds that the gay community will shell out over $769 billion this year, representing an increasingly larger portion of consumers.

J.Crew declined to comment on the image. Fox News recently went after President and Creative Director Jenna Lyons after she shared a photograph of herself painting her son's toenails pink, citing experts who called the picture "blatant propaganda celebrating transgendered children." Can't wait to see what they have to say about this! Actually, we can. Just keep your mouths closed...that's our professional opinion.

Take a look at Somsack and Micah: 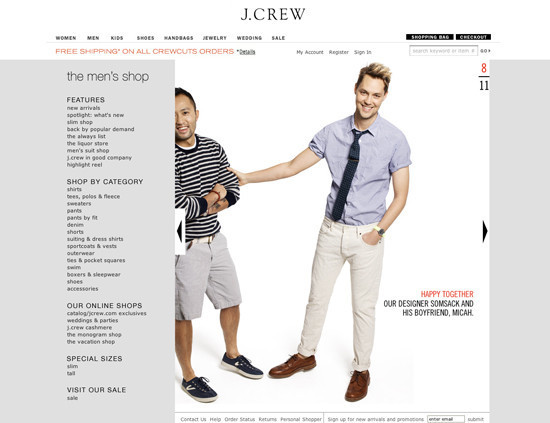