Je Suis Charlie:
Today, in Paris, the nation stood up against terrorism
A first person account from the Paris Rally of Sunday, January 11, 2015 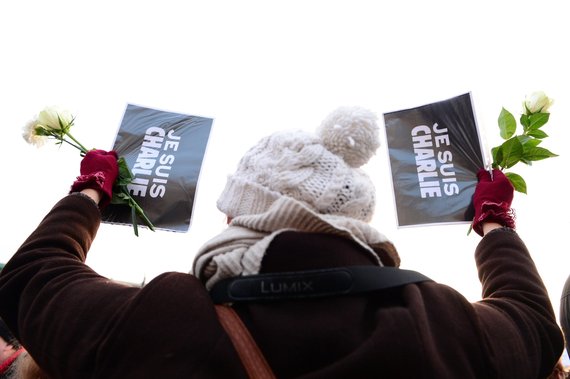 On Sunday afternoon, January 11, 2015, France -- especially Paris -- was the center of an international mobilization following the two horrific attacks committed this past week by radical Islamists in Paris and Vincennes, a suburb to its east.

The second attack was organized two days later in Vincennes in a kosher supermarket in a section of Paris known for its Jewish residents and shops. Five people were killed, including the terrorist, who claimed to be acting on behalf of the Islamic state. This attack was synchronized with the first, occurring when the two brothers were surrounded by the police in a printing factory outside of the capital.

France's response to these two tragedies, the most deadly in France in 50 years, was to call for large-scale rallies ("manifestations" in French) in the center of Paris and throughout many cities throughout the country. More than 40 presidents and heads of state from nations around the world assembled in Paris and joined French President Francois Hollande for a procession in a country known as The Land of Human Rights. As a Parisian, psychiatrist and woman raised as a Jew, I (IA) joined more than 1.5 million people who walked from "La Place de la République" to "La Place de la Nation."

The presidents, remarkably, walked alone without the protection of body guards - they wanted to demonstrate their courage and their call for "No to terrorist acts." It seemed as if an entire nation walked beside them here in Paris, in the procession and following the families of the victims; the presidents, ministers, French politicians of right and left leanings; religious leaders including priests, imams, and rabbis; and celebrities from film and music.

Paris was also full of people in its streets, nameless and without renown, coming from everywhere -- a rainbow of colors, religions, ethnicities, and social classes, marching for freedom of expression, saying no to extremism. 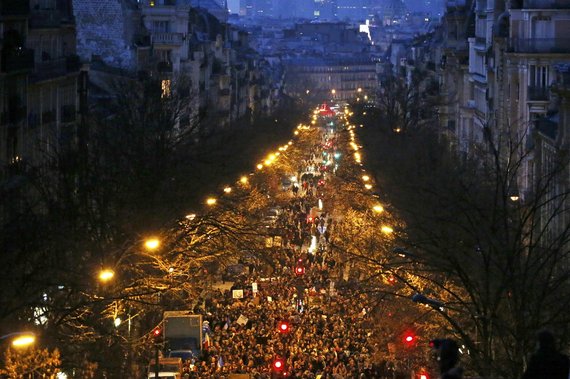 Slogans were everywhere: "Je Suis Charlie" ("I am Charlie") in Hebrew, Arabic, Farsi and French. They asserted "You will not kill our freedom of expression." Thousands of demonstrators, men, women and children, grasped the kinds of pencils used by literary cartoonists and draftsmen: the kind of pencils found in the hands of those massacred at Charlie Hebdo after they were shot by the terrorists.

The Paris "manifestation" swelled with dignity, peace, and friendship -- without incident, a rarity in this city. People turned to one another to say, with conviction, that they will defend the nation against terrorism. The French anthem (La Marseillaise) was sung in the procession, punctuated by periods of silence that were at least as emotionally powerful. Along the route and in the buildings lining the boulevards inhabitants and those who came to Paris cried out their support. Policemen were congratulated for their actions during the terrorist attacks: two had been killed during the attack on Charlie Hebdo and one during the attack on the supermarket.

On this Sunday afternoon, January 11, we saw the cohesion of a nation, a nation traumatized but not beaten. France would win. It would find the strength that comes from nationality, democracy, and solidarity. France would triumph against the radical Islamic movement.

Sunday ended a week depicted in the French press as the "French September 11." Sunday was the moment a nation found its identity and stood up to shun terrorism. "Nous Sommes Tous Charlie." "We Are All Charlie" is a sentence that must be a global call to action. It must be translated in every language and disseminated around the globe. By honoring these people lost, and their lives dedicated to the freedom of expression that is fundamental to liberty and democracy, they have become modern heroes in an enduring struggle to sustain the values that make us human.

Isabelle Amado, M.D., Ph.D., is a Psychiatrist and Director of the Reference Center for Cognitive Remediation and Rehabilitation (C3RP) in Sainte Anne Hospital in Paris (France).

Lloyd I. Sederer, M.D., is Medical Director of the NYS Office of Mental Health and Adjunct Professor at the Columbia/Mailman School of Public Health in New York City. http://www.askdrlloyd.com