I am Charlie, we are all Charlie. Since the attack on the offices of the satirical newspaper Charlie Hebdo, which left at least 12 dead on Wednesday, "Je Suis Charlie" ("I am Charlie") is on everyone's lips. The slogan is appearing in profile pictures on social networks, on signs at solidarity rallies, in newspapers, and in some cities, on billboards.

The slogan and the logo appeared online immediately after news broke of the attack at the Charlie Hebdo headquarters. They were created spontaneously on Twitter on Jan. 7 by an artistic director.

An image when there are no words

Le Progres identified the author of the banner as Joachim Roncin, the artistic director and music journalist for Stylist magazine. He was the first to publish this logo on Twitter, at 11:52 a.m. on Wednesday, less than an hour after the shooting.

He has also claimed authorship of the image in an exchange on Twitter with journalist Valerie Nataf. "I made this image because I am at a loss for words," Roncin said.

"What's happening is so strange, it's completely beyond me," Roncin later said in Le Progres. "I couldn't find the words to express my sorrow and I just had this idea of 'I am Charlie.'"

Roncin told the newspaper the concept came to him because he often read the "Where's Charlie" books [the French version of "Where's Waldo"] with his son.

"I wanted to communicate that this affected me. I feel personally targeted. It kills me, you know," he said.

Roncin also came up with the idea to use the Charlie Hebdo typography for the image.

While Roncin responded to the first media requests asking to use his logo, he became quickly overwhelmed. The image has since gone viral.

It immediately led to the hashtag #JeSuisCharlie, which had been used more than 619,000 times by Wednesday night.

Several "I Am Charlie" Facebook pages were created in the process. France's main solidarity page on Facebook brought together over 250,000 people. 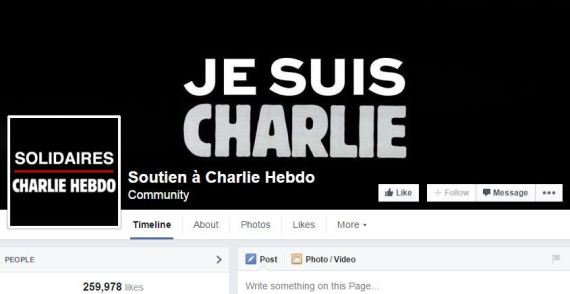 "I Am Charlie" has become a phrase of solidarity and emotion for people of all nationalities, including celebrities, journalists, cartoonists, and politicians.

A terrible day for all cartoonists. #JeSuisCharlie pic.twitter.com/Ksbl89WLsE

I stand with artists everywhere in support of #FreedomOfExpression & against this despicable act #IAmCharlie pic.twitter.com/o7nbpOCz8R

"Je suis Charlie" has replaced the drawings on the Charlie Hebdo website. The magazine's homepage hosts a file with print-friendly translations of the slogan in many languages, ready for worldwide gatherings.