At Frieze Masters 2015 in London, gallerist Helly Nahmad presented paintings by French painter and sculptor Jean Dubuffet (1901-1985). Jean Dubuffet is known for his interest in 'low' or 'outsider' art, and for founding the art movement 'Art Brut.' Dubuffet was inspired by the works of patients in the asylums of Switzerland and France.

Helly Nahmad wanted the visitors to be able to experience this connection. Hence Nahmad commissioned installation designer Robin Brown to create a stand that reconnects Dubuffet's works with the art that originally inspired them. Brown conceived a suite of rooms that invoke the sanatoria that had caused Dubuffet's interest in Art Brut. The rooms are covered with images derived from the Art Brut, but it's not a recreation, it's a reimagining. In this video, Robin Brown talks about the concept of the stand, its components and creators and his personal background and projects.

Robin Brown is a multi-award-winning Art installation and Production designer working in the British Design and Film Industry now for 25 years. 'The Asylum' installation at Frieze Masters 2015 is his second installation design, following on from the acclaimed 'The Collector' installation for Helly Nahmad London in 2014. Robin Brown has worked with directors such as Michel Gondry, Rupert Sanders, Ivan Zacharius, Tom Kuntz, Traktor, Shekar Kapur and Daniel Wolfe. He has won awards from Cannes Lions, Creative Circle, New York Festival, Deutsche Werber Filmpreis, Epica, BTAA and D+AD. 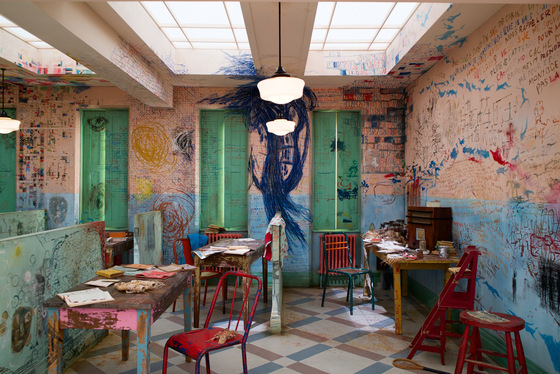