Jean Dujardin, a famous French television actor, just won the best actor award at Cannes for his role as a silent movie star in Michel Hazanavicius' film The Artist.

The Artist was one of the most interesting films in the competition this year, as technologically out there as Avatar. It was the first silent black-and-white movie ever in the Cannes competition. Indeed, it was a shock to come to the screening and see the story develop -- and never turn to color. Many at Cannes raved about this silent picture, perhaps because it challenged modern viewers to experience cinema in a fresh way: reading faces for emotion as music soars.

French director Michel Hazanavicius (known for spy flicks and tv shows) told me that he first had the idea to do a silent film, then tried to find the story that fit it. "And what fit naturally," he said. "Was a story about a silent film star." Hence, he asked Jean Dujardin to play the role of a silent film star who goes through great depression when movies become "talkies." There is also a wonderful love story between him and another movie star, the beautiful Brazilian actress, Berenice Bejo, the director's wife.

Some journalists wanted The Artist to win the Palme D'Or, however, the movie -- its story evidentally an afterthought -- is clearly too light for such an honor. Most of all it is fun to watch, especially the cute little white dog (Jean Dujardin's best friend in the movie) who goes wolf in the actor's arms. Giving the lead actor an award seems to be a judicious way of acknowledging the picture's worth as entertainment. 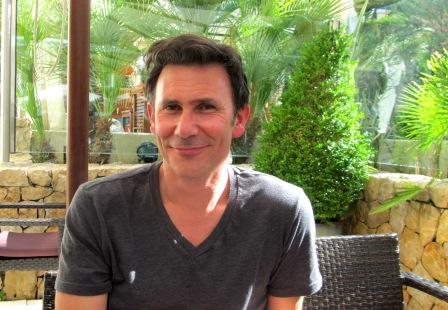 The director, an eager and honest young man, dressed casually in a grey t-shirt and jeans, was quick to concede that thought-provoking depth wasn't what he had in mind. "In a silent movie, you can't go so far. I didn't want it to be so serious; that is why I added a few little jokes." Pleasing the audience was enough of an aim.

"I think mine can be a moving movie," Hazanavicius stated, naively boyish.

It does move us. Jean Dujardin does a memorable job in rendering emotion, his face either full of pride or despair. The other forte of this little gem is that its form never stops astonishing you.

"I make people believe they are seeing an old movie, but they are not," the director confided.

For example, the way I use music. It's actually boring in silent movies. I used music as it is composed today. The sophistication of my narration benefits as well from 90 years of sophistication in cinema. Silent movies did not have as complex a plot as we do. We also had access to special effects, improved lighting and the best photo laboratories in Los Angeles.

A Greek journalist noted that this is what he most liked about the movie: "It is both a movie of the past and a modern movie."

Hazanavicius himself first saw silent movies as a kid, with his grandfather in the theaters on the Grands Boulevards in Paris, which no longer exist today. His eyes beamed as he discussed Buster Keaton. "I loved Buster Keaton. I thought he was beautiful and so funny. I was a kid and really laughing at him. The Kid, by Charlie Chaplin, was one of the most touching films of this period. And so was City Lights."

In many ways, this film is an homage to the tradition of movie watching. The director's own favorite shot in the movie is a shot of the spectators in the audience, watching a silent film, in which, of course, Jean Dujardin stars.