In the last month we have seen Edvard Munch go for $120 million, Mark Rothko sell at $87 million and Roy Lichtenstein auction off at $44.9 million. Now one of Jean-Michel Basquiat's untitled pieces from 1981 is on the chopping block and already stirring up rumors of record prices. Scheduled for auction on June 27th at Christie's in London, "Untitled" is sitting pretty at a $20 million estimated price. This is nearly four million higher than Basquiat's previous record, which was achieved last May in New York. 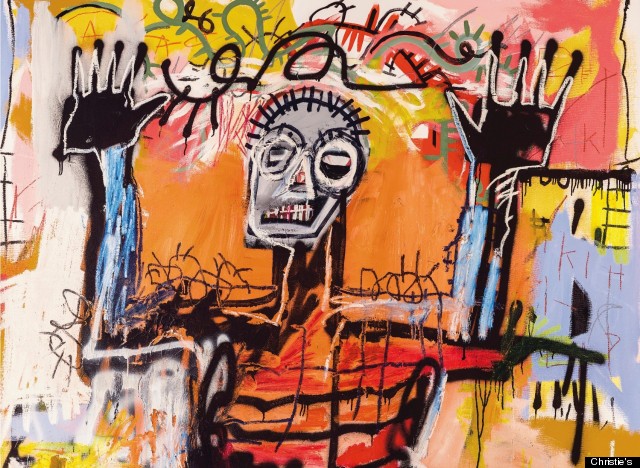 The untitled work is a partial self-portrait and pseudo-sanctification of boxing heros, combining a bright array of reds, yellows and oranges with dark graffiti lines. It perfectly captures the period in which it was painted, a time when Basquiat was transitioning from the streets to the studio, turning his urban graffiti into neo-expressionist paintings. Like the rest of his body of work, the painting is infused with Basquiat's iconic imagery, and showcases his mastery of symbolism.

Basquiat's resume reads like a 1980s version of James Franco's rise to art stardom. He showed at Annina Nosei and Gagosian, worked with David Bowie and Andy Warhol, produced a rap single, and briefly and famously dated Madonna. He was an extremely talented marketer of his own work, but his career was ultimately cut too short by heroin -- leading to his untimely death in 1988. But his work continues to be revered, reflected not only in the Christie's estimates but also in his persistent role in pop culture -- even Jay-Z and Kanye make reference to the artist in their album "Watch The Throne."