Structures have enormous power. The ancient Egyptians, who built burial pyramids for their kings believed the iconic shape of a mound of earth was the symbol of all life. The Burmese, whose bell-shaped Zedi monuments said to date from the 16th Century, constructed conical pagodas as places of meditation to houses their Buddhist relics as well as the ashes of their monks. Structures--both sculptured object and architectural edifice -- give us shelter, often outlast our lives, house our dead and contain our dreams. Weathered, regal and enduring, structures are the source of inspiration for the two artists, Jean Pagliuso and Toni Ross, now showing at The Drawing Room in East Hampton.

In 2010, Pagliuso and Ross traveled together to visit the ancient sanctuaries in Egypt and Burma. Often rising before dawn, they explored these historic sites at first light, before the crowds and the noise descended, when they were alone in the ruins. The mystery of that solitude of space and their collective inspiration permeates the gallery's combined presentation of their work.

Jean Pagliuso began her career in fashion photography and quickly rose to collaborate with film studios and directors like Robert Altman. There remains a backdrop of theatricality and an element of cinematic splendor in her work.

Her current series of images reflect both the grandeur and fragility of architecture. An extensive traveler, Pagliuso's examines the mystery of place. Her technique itself, painting silver gelatin on rice or mulberry paper, imparts her images with a gossamer quality that underscores the ethereal subject matter. These pieces, with their handmade construction, have an old school, 19th century feel. Sometimes Pagliuso glues two sheets together to form a longer panel, and the rippling seams add to the antique texture of her work.

The transcendent and the corporeal are constantly at play in a Pagliuso image. Seen from a distance her monuments convey an otherworldly panorama, but in miniature, as if we are viewing these worlds in the palm of our own hands like vistas in snow-globes. This perspective has the effect not of remoteness, but of emphasizing the fragility of these places and their susceptibility to human interaction. 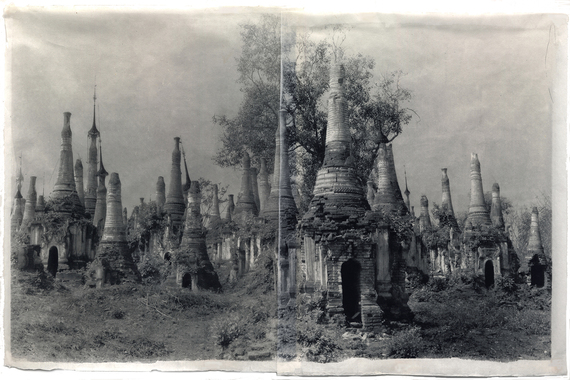 Pagliuso's lens often captures a distorted scale. Rubble at the foot of the pyramids, the building blocks and the formal patterns that make up these structures, are caught by her camera up close causing them to appear outsized. A corner of the temple in Machu Picchu, for instance, when reduced to a composition of squares and triangles, is nearly abstract. 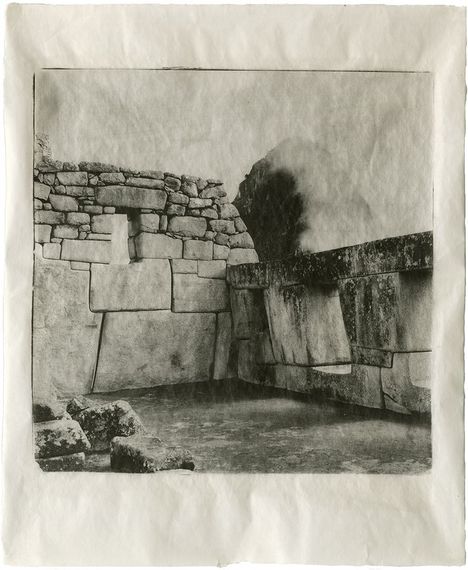 Pagliuso is a master at capturing how spaces and structures cling to that ephemeral feature: memory. How the addition and subtraction of lives have been stored in these places. How they stand as testaments to life and bear witness to devotion. Some of the sites she has photographed are now so broken or divided by political conflict, they no longer exist as place, only as memory, only as image. In this context, they have transformed from sites of worship, to devotional objects. It is a testament to Pagliuso's eye and expertise that she has encapsulated this transmutation.

Toni Ross traveled to Italy in the 1980s where surrounded by Roman and Etruscan ruins, she trained as a painter. Returning to the Hamptons, she was mentored by Elaine de Kooning in painting and drawing, before devoting herself to her work in clay. She is a skilled pastry chef and educated in the rich traditions of Japanese ceramics. All these influences -- the painterly quality of her glazes, the sense of the ceramic as a canvas, the imprint of her touch, the texture of antiquity -- imbue work. Her narrow vessels are regal, otherworldly, but human scaled. 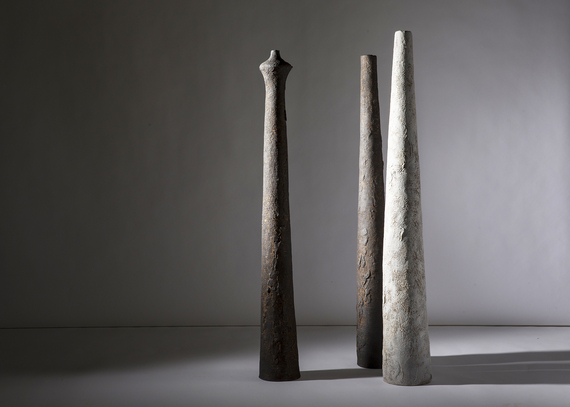 Ross says that there is an element of self-portraiture to her sculptures. Their size is her size--the length of her arm. Their shape, tall and slender, is her shape. They are female, distinctly sensuous, with revealing, suggestive openings and secrets in their hidden interiors. 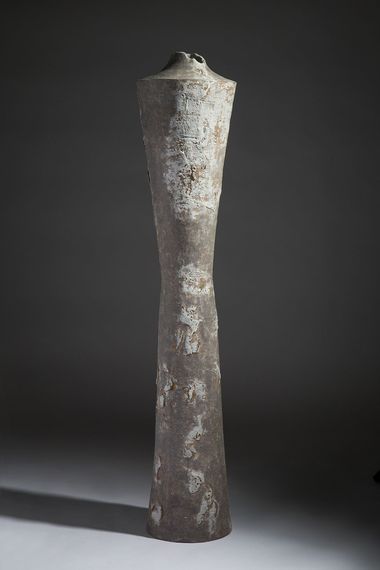 Covered in chalky glazes with surfaces abraded and scraped, Ross's sculptures are enveloped in quiet mystery. A timeless quality of texture and shape that owes as much to the tradition of abstraction as it does to the layered history of the sites she visited. On her travels, Ross was astonished to encounter shapes so similar to her own. From the terracotta "soul houses" in Cairo, which resonated with her slab cubes; to the stupas in Burma, which echoed her protruding cylindrical forms, Ross took away a deep affirmation of the idea of a collective unconscious.

This is a moment of confirmation for an artist -- a moment when like Rothko viewing the ancient ruins of Pompeii and realizing that all along he had been working towards the same idea of sacred space that these places epitomized -- an artist confronts the through-line of his or her work. It is exciting to witness Ross embrace this moment. Her objects now not only embody the complicated processes in her history, but a universal history. Both contained and unbound, these sculptures reveal a new, a delicate monumentality.

Combined, the presentation of Ross's and Pagliuso's works at the Drawing Room create an installation that feels very much like a sacred space. As if the architectural elements in Pagliuso's photographs have rematerialized in Ross's vessels and cubes. The show itself exists in a sort of liminal zone, between night and day, between the realm of desire and the world of manmade things. Between what Ross and Pagliuso experienced together on their journey, and what they then undertook in their individual work when they returned.

Basic Facts: JEAN PAGLIUSO: Fragile Remains II and TONI ROSS: Contained. Unbound are on view at The Drawing Room from May 23 until June 23, 2014. The Gallery is located at 66 Newtown Lane, East Hampton, NY 11937. The Drawing Room Gallery.

Join both Artists for A Conversation about their work at the Drawing Room Gallery on June 22 at 11:30 a.m.

All Images Courtesy of The Drawing Room