The hill of St. Cloud rises up before me on the left, the trees are bending over me to shadow me, the way is smooth and never-ending. It is full sunlight and the roads extend in every direction, and all the roads are downhill. I would not level the road nor remove any of the bumps. I have marked all the spots in passing: to retrace my thoughts I have only to retrace my journey, re-feel these bumps. --Henry Miller, from Black Spring

Several years ago, in about 2009, painter Jeanne Dunn had a similar experience, while bicycling in Brittany. The metaphors of wilderness are plentiful, but Dunn recalls "a very specific moment when we were lost in this gorgeous but unknown terrain of pastoral pathways, and canals that Napoleon built but never used; of rutty roads between far-flung villages; spotting distant clearings and shadowy groves. She had a residency nearby the next year, in a dilapidated chateau, and that's when she started working on the tree paintings in earnest. 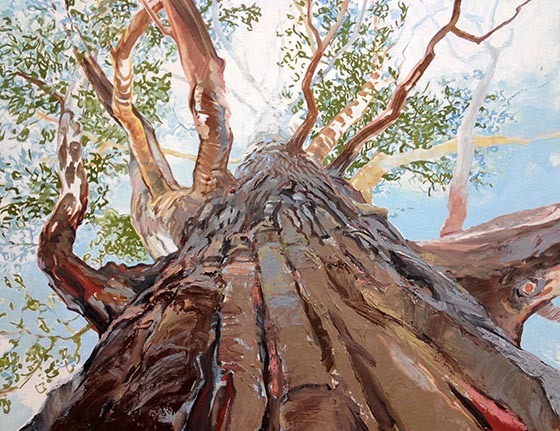 As a matter of form, trees beg anthropomorphism. Trunks and limbs lean and strive, they dance and wave; appearing active and expressive; existing in thick entanglements, or as lone sentinels. So aside from the literary archive that ranges from Tolkien to Silverstein, Grimm to Jung, Kilmer to Carroll, our bark-clad companions make fine visual as well as symbolic stand-in humans. Dunn tries not to call her paintings portraits, even though she admits they kind of are. But she does refer to the trees as "the figures," and she has noticed that often viewers will not only ascribe emotions and intentions to the trees, but will indicate certain ones as "he," or "she." If anthropomorphism is a narrative factor, then so it seems must be the role of gender. Dunn is aware of this, but insists that in the work it's neutral, or perhaps blended. It's not quite androgyny, nor is it hermaphroditism. It's both inclusive and transcendent. As they are stand-ins for the human presence, viewers are welcome to perceive aspects of themselves in the pictures -- including the sexual.

Dunn herself employs the vectors and paradoxes of her personal history and vision in her arboreal renderings. The camera may be her sketchbook, but realism is not her goal. Nature is less her subject matter than it is the raw source material of her pictures. In her studio depiction becomes a dialog and evolves past the crisp border of ideal realism -- but not so far toward abstraction or surrealism that the heroic image is undermined. "I'm not interested in particular trees, but in trees as an idea," says Dunn. "But that said, certain trees do confront me. They present themselves to me!" But between those encounters and the canvas, they are morphed, embellished and rearranged. The same tree might appear in multiple works, but each time in an affecting new way. Barks, bends and arrays of foliage vary as though affected by age and experience, or as though seen at different points along the cycle of the seasons. The trees become evocative, strange and mysterious, while remaining suggestive of and suggested by the natural world. To be allegorical requires tethering to that grounded object. 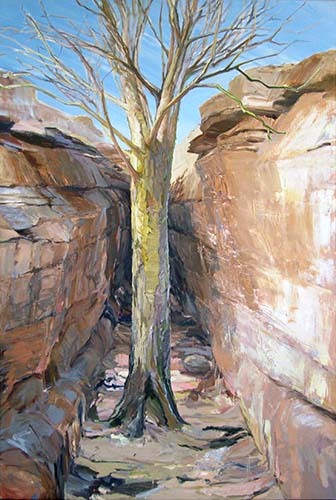 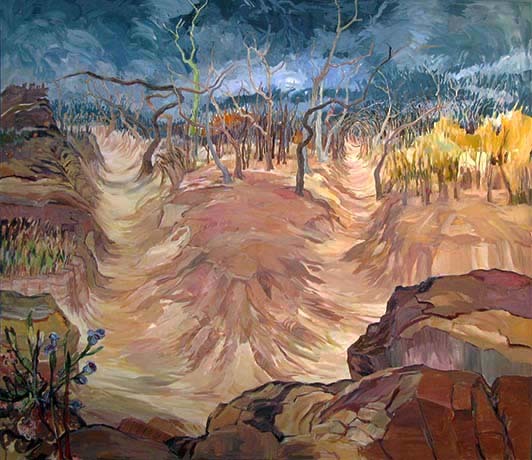 Not only the trees but the landscapes get this interpretive treatment. Often there is only a single tree, or the composition is cropped and perspective forced, so that grounds, full skies and contoured horizon lines are not always visible. But when they are, topographies are redistributed, furrows deepen, paths fork, trails are obscured or lost under cover of leaves or shadows, pictorial space is compressed and elongated and glimmering clearings evaporate like mirages before your very eyes. Hybrid species of flowering evergreens are invented. Picturesque but awkward visual pathways are gently blocked, as the eye and the foot are beckoned and thwarted. "This work is conceptual and operates on the psyche; and it is also visceral. It's a conversation that takes place in our bodies." Dunn's series have always been about relationships -- individual to individual, individual to the group. "I heard on NPR once that trees communicate through their root systems. That sounds right to me."

Dunn's work can currently be seen as part of ABOVE GROUND, through June 20th at RB Stevenson Gallery in La Jolla.