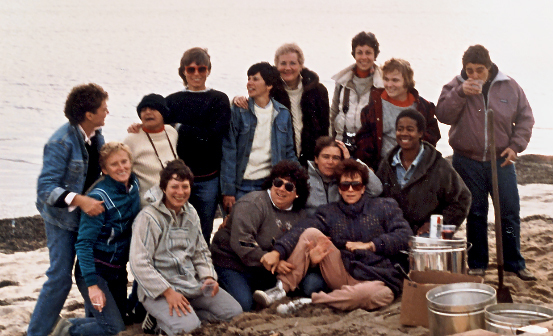 This week I talked with Jeanne Leszczynski co-owner of the Sage Inn in Provincetown Massachusetts about Women's Week in Ptown that takes place October 12 through the 18. In 1984 several entrepreneurial and fabulous lesbian innkeepers, shown in the above vintage photo, came together to talk about ways to bring gay women back to Provincetown during the fall. This small discussion blossomed into the idea of a clambake on the beach for one weekend in October that would be called Women's Weekend. The event was a resounding success and today is one of the largest and longest running lesbian events in history. For over 30 years Women's Week has grown far beyond anyone's expectation. There are over 150 events including workshops, film screenings and performances by comedians, jazz, blues and contemporary musicians to entertain those celebrating during this special week. I talked to Jeanne about what's happening this year at Women's Week in Provincetown and her spin on our LGBT issues.
LISTEN:

When asked what she would like to see happen for LGBT equality in the next few years Leszczynski stated:

Well mostly I'd like it to become a non-issue. I would like for everyone to be treated equally. I'm not that naive to think that is going to happen anytime soon so we will have to continue to support GLAD and MassEquality in maintaining the law of the land and of course keeping government attuned to our issues and so we know that has to continue for awhile. There's a lot of maintenance to be done. When that day happens what I would like to see us do and I would like us to do now is to extend what we have learned about our equal rights to other minority groups and help them achieve what gay people have achieved in the acceptance in society of differences. I think we also should help in the conversation about drawing a line between government and religion. Sometimes that line gets a little grey and it takes a little wisdom to sort that through. We don't want to intrude on anyone's religious rights but yet government is for the whole society and not for any individual's belief. So that I think is going to be a very interesting conversation in the next few years.

Jeanne Leszczynski and her partner Diane DiCarlo are major donors to the Provincetown Film Society, the Center for Coastal Studies, the Human Rights Campaign, the Freedom to Marry Coalition, GLAD (Gay and Lesbian Advocates and Defenders) and the Massachusetts Horticultural Society. They purchased the former Pilgrim House and Vixen Night Club in 2011 and opened Sage Inn & Lounge in May 2012 as a center of hospitality in Provincetown throughout the year. During Women's Week some of the concert performances at Sage Inn will include the legendary Alix Dobkin, Tret Fure as well as jazz pianist and singer-songwriter Barbara Higbie with Ptown's own Zoë Lewis. Performing in other venues around town will include concerts by Cris Williamson, Suede and Linda Eder to name a few. Some of the fabulous comedians appearing throughout Women's Week include Kate Clinton, Jennie McNulty, Poppy Champlin, Vickie Shaw, Mimi Gonzalez, Kristen Becker, Maggie Cassella, Suzanne Westenhoefer and more. (Photo Credit Laurel Brooke Courtesy of Elizabeth Brooke)
For More Info & Tix: womensweekprovincetown.com