Jeanne Manford, the founder of PFLAG (Parents, Families and Friends of Lesbians and Gays) and an all-around pioneering straight ally in the LGBT rights movement, has died at 92.

Manford died at her Daly City, Calif. home and had been in declining health for some time, daughter Suzanne Swan confirmed.

“She is known to thousands of people as the mother of the straight ally movement, but to me –- she was my mother," Ms. Swan said in an email statement. "She was someone who would always do the right thing, the good thing. She supported all people, and that meant so much to us growing up.”

Born Jeanne Sobelson on Dec. 4, 1920 in Queens, N.Y., Manford became active on behalf of LGBT rights in 1972 after her son Morty was beaten during a Gay Activists Alliance demonstration. After Morty's attack, Manford penned a letter to the editor of The New York Post, declaring "I have a homosexual son and I love him."

She subsequently joined her son in the 1972 Christopher Street Liberation Day Parade (predecessor to NYC's LGBT Pride Parade), carrying a placard stating "Parents of Gays: Unite in Support Of Our Children." The first meeting of PFLAG (which was then known as "Parents of Gays" or "POG") was held in New York's Metropolitan Community Church the following year.

"All of us -- people who are lesbian, gay, bisexual, transgender, and straight allies alike -- owe Jeanne our gratitude," PFLAG officials said in an email statement. "She paved the way for us to speak out for what is right, uniting the unique parent, family, and ally voice with the voice of LGBT people everywhere."

A private interment service will be held and details of a later celebration of Manford’s life and legacy will be announced later. The family requests that any donations be made to the Jeanne Manford Legacy Fund to support the ongoing work of PFLAG National: 1828 L Street, NW, Suite 660, Washington, D.C. 20036. 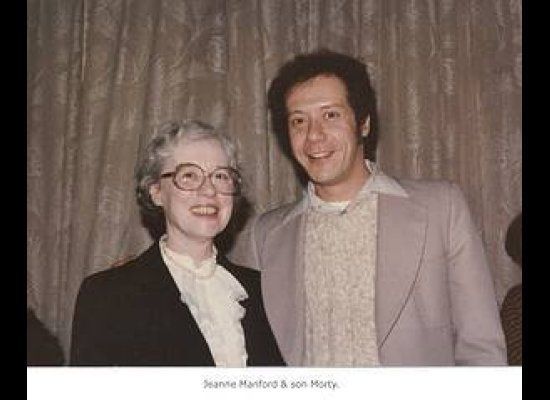