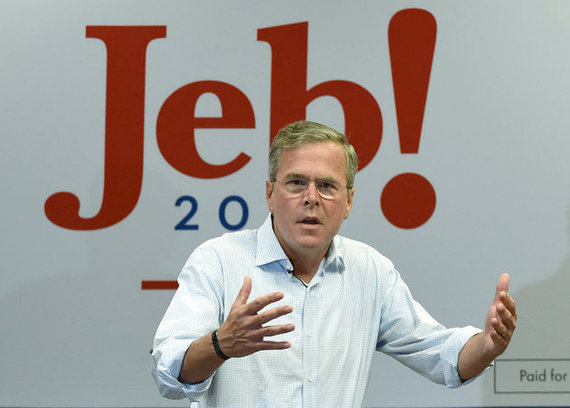 The Republican Party has struggled for years to attract more voters of color. In a recent campaign appearance, candidate Jeb Bush offered yet another useful case study in how not to do it.

At a campaign stop in South Carolina, the former Florida governor was asked how he would win over African-American voters. "Our message is one of hope and aspiration," he answered. So far, so good, right?

"It isn't one of division and get in line and we'll take care of you with free stuff. Our message is one that is uplifting -- that says you can achieve earned success."

Bush's suggestion that African Americans vote Democratic because of handouts is flat-out wrong. Data from the Joint Center for Political and Economic Studies shows that blacks have historically trended Democratic in correlation with the party's support for civil rights.

These days, blacks vote Democratic because they believe Democrats pay more attention to their concerns. Consider that in the two GOP debates, there was only one question about the "Black Lives Matter" movement. When they do comment on it, Republican politicians feel much more at home criticizing that movement against police brutality than supporting it.

Bush is also incorrect to suggest that African Americans want "free stuff" more than other Americans. A plurality of people on food stamps, for example, are white.

Moreover, government assistance programs exist because we've decided, as a country, to help our neediest fellow citizens. What Bush derides as "free stuff" -- say, Medicaid, unemployment insurance, and school lunch subsidies -- are a vital safety net for millions of the elderly, the poor, and children, regardless of race or ethnicity.

How sad that Bush, himself a Catholic, made his comments during the same week that Pope Francis was encouraging Americans to live up to their ideals and help the less fortunate.

Finally, Bush's crass comment is especially ironic coming from a third-generation oligarch whose life has been defined by privilege.

Bush himself is a big fan of freebies. The New York Times has reported that, during his father's 12 years in elected national office, Bush frequently sought (and obtained) favors for himself, his friends, and his business associates. Even now, about half of the money for Bush's presidential campaign is coming from the Bush family donor network.

And what about those corporate tax breaks, oil subsidies, and payouts to big agricultural companies Bush himself supports. Don't those things count as "free stuff" handed out to some of the richest people in our country?

It's also the height of arrogance for Bush to imply that African Americans are strangers to "earned success." African Americans have been earning success for generations, despite the efforts of politicians like Bush -- who purged Florida's rolls of minority voters and abolished affirmative action at state universities.

If nothing else, this controversy shows why his candidacy has yet to take off as expected. His campaign gaffes have served up endless fodder for reporters, pundits, and comics alike, sometimes with a familiar ring.

As you may recall, Mitt Romney helped doom his own presidential aspirations by writing off the "47 percent" of the American people he said would never vote Republican because they were "dependent upon government."

Bush's "free stuff" remarks are the latest wrong note in his flagging campaign. The last thing this country needs is a man of inherited wealth and power lecturing the rest of us about mooching.