WASHINGTON -- Ever since former Florida Gov. Jeb Bush announced last month that he was seriously considering a run for president, pundits and political observers have questioned whether the well-connected Republican is conservative enough for a party that has drifted rightward in recent years.

Influential conservative columnist George Will wrote last month that Bush's support for Common Core education standards was, by itself, reason enough not to vote for him. Last week, Larry Thornberry of the conservative American Spectator wrote that Bush's murky business career, coupled with his support for immigration reform, would present major hurdles in his quest to connect with middle-class Republican voters. And the challenges for the former governor will be particularly pronounced in a primary field likely to feature more ideological conservatives like Texas Sen. Ted Cruz and Kentucky Sen. Rand Paul.

But Bush hasn't always been the cheery moderate that he's presented as today. In fact, during his first campaign for governor of Florida in 1994, he was quite conservative.

In order to win the Republican nomination in that race, Bush ran as a hard-liner, staking out positions to the right of his GOP primary opponents on issues such as education, taxes, welfare and criminal justice. He eventually prevailed over the five other Republicans in the primary, though he lost the general election.

"A lot of Bush's ideas during his first run for governor in 1994 were really cutting-edge for the GOP," said Dr. David Colburn, director of the Askew Institute on Politics and Society at the University of Florida. "Bush was the fellow who was out in front and leading the charge with radical reforms."

The cornerstone of Bush's campaign was a sweeping set of conservative proposals that, if enacted, would have made Florida a virtual laboratory for far-right policy.

"I would abolish the Department of Education as it now exists, reducing the 2,000 person bureaucracy to about 50 to administer federal education funding and maintain minimum academic standards in Florida's schools," Bush told the Orlando Sentinel in a November 1994 interview.

Bush also laid out a plan to require that any proposed new taxes be approved directly by Florida voters, a strategy that would have made it nearly impossible to pass them. What state revenue there was, Bush said, should be used whenever possible to hire private corporations to replace state employees.

Bush's tough brand of conservatism also featured new restrictions for Florida's welfare recipients. In early 1994, Bush unveiled a welfare reform plan dubbed the "Phoenix Project." The goal of the project, he later told the Miami Herald, was to "dismantle the welfare state and all the culture that comes from it."

Under the plan, Florida would refuse to accept federal funds to aid the state's poor families, and restrict benefits to just two years of assistance. To be eligible for benefits, poor women would be required to "identify the fathers of their children, submit to random drug tests and work if jobs were available," according to a Herald story from March 1, 1994.

Bush's welfare plan was an early sign of the sharply conservative tone that would come to characterize his entire campaign. In July, Bush published a now-infamous op-ed arguing against anti-discrimination protections for LGBT people, which he said were tantamount to elevating "sodomy." Bush's team has since sought to distance him from that piece, with a spokeswoman telling BuzzFeed that it "does not reflect Gov. Bush's views now." 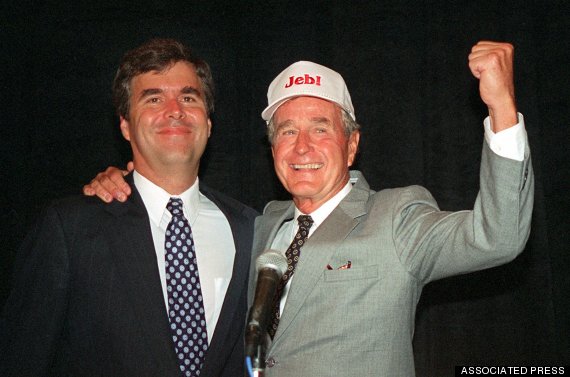 Above: Jeb Bush and his father, former President George H.W. Bush, at a Republican fundraiser in Tampa, Florida, on September 16, 1994. (AP Photo/Chris O'Meara)

As Bush crisscrossed Florida in the summer of 1994, he promised to build more prisons and ensure that convicts served at least 85% of their original prison sentences before they were paroled. In the cases of juvenile offenders, Bush told the Sentinel that it was time to "emphasize punishment over therapy."

One of Bush's central themes during the 1994 campaign was his desire to streamline the execution process for death row inmates. In order to do this, he proposed limiting death row inmates to only one appeal with the state, a measure he hoped would speed up the state's execution process. Bush named his plan "one trial, one appeal," and released it at a press conference in the spring of 1994. According to a May 19 report in the St. Petersburg Times, Bush told attendees, "I believe the one trial, one appeal will speed the enforcement of the death penalty by two to four years in most death cases."

Enacting the "one trial, one appeal" plan would have required Florida voters to approve an amendment to the state's constitution, but this hurdle didn't dissuade Bush. Speaking to the Sentinel in November, he reiterated his goal, telling the paper, "I want to accelerate, not slow down, the enforcement of the death penalty in Florida."

Although Bush's policies helped him win the Republican primary in September, they proved too conservative for Florida voters in the general election, which he lost to iconic Democratic governor Lawton Chiles. Following that defeat, Bush worked hard to cultivate a more measured, inclusive tone, which contributed to his eventual reputation as a "moderate" voice within the GOP.

When he ran again for governor in 1998, Bush adopted a more populist message, toning down some of the more controversial parts of his 1994 platform. But some political observers doubt that Bush ever really changed his stripes.

"What Bush didn't actually change were his positions," said Dr. Robert Crew, associate dean and director of the Master's Program in Applied American Politics and Policy at Florida State University. "Bush changed the tenor of his campaigns, and that's it. The second time he ran, he wasn't as Ted Cruz-like."

As Bush embarks on the fourth, and biggest, campaign of his career, becoming more "Ted Cruz-like" may be precisely what he needs to do to make it to the 2016 general election. Many of the social and political reforms that Bush laid out in 1994 still align with the values of Republican primary voters. A recent Gallup poll showed that support for the death penalty remains above 75 percent among Republicans, making it a highly attractive position for GOP candidates. The same is true for welfare reform, judging by a 2013 NBC News poll, in which respondents said the number one cause of persistent poverty was "too much government welfare."

"Bush could absolutely run on these positions in the primary," Crew said. "Still, pivoting to the center for a general election is a very difficult transition to make. It used to be ... that you could go to one part of the country and say one thing, and then go to another state and say another. That's not the case anymore."

If You Think Jeb Bush Is A Moderate, Then You Missed His 1994 Campaign
Out-Of-Touch Politicians