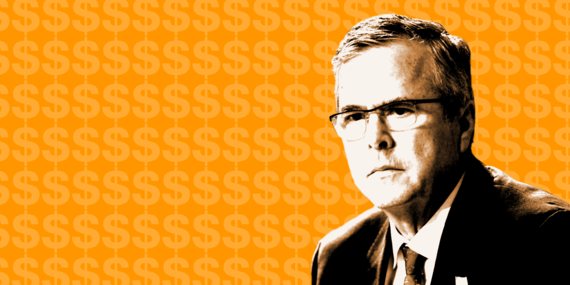 When Jeb Bush officially announced his candidacy for president last June, his campaign and super PAC, Right to Rise, already sat on a pile of money that outsized the fundraising hauls of all other Republican candidates combined. Jeb's fundraising machine was a behemoth. And when the former Florida governor suspended his campaign last month, pundits asked whether money really matters at all in an election season that seems to defy conventional wisdom at every turn.

It does. Using Jeb's failed candidacy to jump to the conclusion that big money doesn't matter in today's elections is like saying that money no longer matters in baseball because the New York Yankees didn't make it to the World Series last year. There's a reason that the Yankees, the Red Sox, and the Giants win so often while the Oakland A's haven't competed in the Series for a quarter century. Money matters, and it gives our candidates and our baseball teams a better shot at the title.

The silenced majority
The dependence of Jeb Bush and other candidates on mega-donor contributions creates several challenges for our democracy. First, grassroots candidates with broad public support may never have a chance to run a competitive campaign because they lack access to high-dollar donors. Nearly all of today's presidential candidates have received their share of million-dollar contributions. While Donald Trump has tossed out this familiar fundraising strategy in favor of self-funding, spending millions of dollars out of your own pocket isn't an option for most qualified candidates seeking public office.

Second, today's campaign system and the resulting political landscape give special interest groups and the ultra-wealthy an outsized voice as candidates work to court big donors. The handful of contributors that can afford to drop tens of thousands, and sometimes millions of dollars into a presidential campaign have a different set of priorities and policy preferences than most Americans. As a result, regular voters have a diminished voice in today's elections while the wealthiest Americans influence who can run, what issues get debated, and who can win. What's more, they retain that influence once a candidate gets into office.

The super PAC donors that Jeb Bush spent time courting provide a perfect example of this disparity. Right to Rise received the bulk of its money from a handful of wealthy donors giving an average contribution of $26,000, according to filings with the Federal Election Commission. That's about half of what the average American family makes over the course of an entire year.

When big money loses
There's a high probability, not a certainty, that a candidate who out-fundraises their opponent will win their election. Despite Jeb's exit, Trump's unorthodox campaign, and other features that have made the 2016 presidential race unique, that rule of thumb remains as relevant as ever.

We don't have the same large data set for presidential races, but each of the past four presidential elections were won by the party nominee with more money. Jeb dropped out of the race last month, and that's not what we'd expected based on his fundraising returns, but the better-funded candidate is bound to lose some of the time.

The staying power of big-money candidates
Even though Jeb didn't win, big money made a difference in his race. By October of 2015, polls were already showing that support for the former governor had fallen to the single digits. While Jeb's campaign might otherwise have called it quits, his Right to Rise super PAC gave his campaign another lease on life. While the $118 million Right to Rise wasn't legally able to coordinate with Jeb's campaign, it and other super PACs in the 2016 election have found ways to work around the law to keep their candidate in the race.

"We just started to advertise -- actually the Right to Rise PAC started to advertise, not our campaign," said Jeb in one October interview with Iowa Public Radio. Jeb's verbal slip is understandable given the close work of Right to Rise and the candidate's campaign, which often shared consulting staff, data firms, and found other ways of pushing regular campaigning costs onto the associated super PAC.

The silver-lining to a gold-plated candidacy
While the unprecedented influence of mega-donors in today's presidential race is disheartening, one takeaway from Jeb's failed presidential bid does provide some consolation: voters are tired of the same old politics. People are ready for a system that puts them above mega-donors and special interest groups. If our country is able to direct that energy into passing long-term voter empowerment solutions, 2016 could be an opportunity for real reform.

Over the past year, voters and lawmakers across the country have introduced solutions that could change how campaigns work at the state and local level. As Jeb's numbers were dropping in the polls last November, voters in Maine and Seattle passed small donor empowerment ballot initiatives with an overwhelming majority of the vote. Now, localities across the country, including our nation's capital, have introduced their own solutions to refocus local elections on everyday voters and small donors.

The Jeb campaign began with an exclamation point - pundits and voters alike were shocked by the record-breaking sums of money that Jeb was able to raise so early in the presidential race. This February it ended with a question mark as many of those same pundits asked whether big political spending has any effect at all.

Do mega-donors still have an outsized voice in our democracy? The better-funded candidate may only win their race 91 percent of the time, but look at the real-life impact of how money shifts the focus of our elections. Look at how our elected officials cater to a narrow set of wealthy donors instead of everyday Americans. The answer is 100 percent yes.