Baseball player Jeff Francoeur is an all-star when it comes to connecting with fans.

Last week, the major league right fielder for the Kansas City Royals took a quick time out from batting practice to say hello to an excited young fan -- a child with autism.

According to a heartwarming thank-you note that the child's mother, Tammy Blanchard Robertson, posted to Facebook, Francouer signed the 7-year-old boy's hat, chatted with him briefly and posed for a picture.

Scroll Down For Letter And Photo

"We just wanted to say thank you," she wrote. "It is truly a day that our son will never forget. You are a true role model, this was a day our family will always remember."

This isn't the first time that Francouer -- nicknamed "Frenchy" -- has won admiration from fans. In April, he had 20 personal pizzas delivered to a "small but animated" section of Oakland A's supporters at a game. In May, he famously threw a $100 bill into the stands, along with a note instructing spectators, "Buy some beer on me."

Just last night my husband, daughter and 7 year old son attended the Royals vs Astros game here in Houston. My husband was born and raised in KC and our family lived there for 5 years before we were transferred to Houston.
Last year my son was diagnosed with Autism. Going to large stadiums that are really loud are out of my sons comfort zone, we told him we were going to see the KC Royals and he was instantly excited.

My husband told our son that he should call you over and that you may autograph his cap for him. As my son yelled with hope in his voice, you came jogging over to us. My son was so excited when he saw you coming over that he fell while trying to climb over the seats to the front row. It is rare that we see our son get excited over anything to do with sports as Autistic children tend to be more interested in books, and computers rather than sports.

Our son stared up at you with tears in his eyes, you took the time to coddle him, ask his name and make him feel special.

We just wanted to say thank you for not only taking the time to come over to see our son, but for signing his hat, and posing for a picture with him. It is truly a day that our son will never forget. You are a true role model, this was a day our family will always remember. 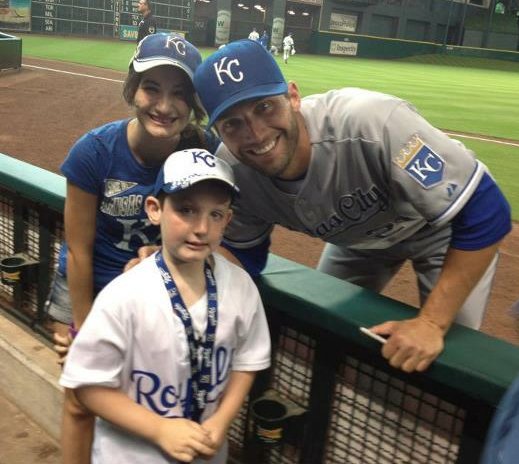