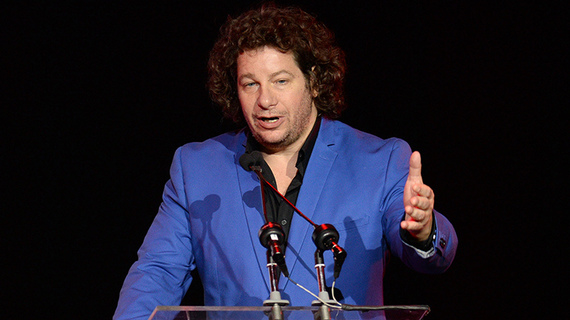 Verbal spars often make for great comedy and if there's anybody who can give good comedic tongue, it's Jeff Ross. Dubbed Roastmaster General by Comedy Central after numerous gut-busting verbal assaults on the network's popular celebrity roasts -- Joan Rivers, Charlie Sheen, James Franco, et al -- Ross has elevated roasting into an art form. He even nabbed his own Comedy Central series, The Burn, early last year -- it found the comic and his cohorts grilling hot topics and current events.

Curiously, Ross, New Jersey-bred and full of pluck, never set out to be a comic. He credits early influences like Steve Martin and Cheech & Chong, but it wasn't until long-time buddy Mark Chapin, who co-produced Ross' surprisingly layered documentary, Patriot Act: A Jeffrey Ross Home Movie, nudged him toward comedy when Ross was in his early twenties that he found his true calling.

These days, Ross remains eternally busy and generates significant buzz -- let's face it, if Don Rickles, Joan Rivers and Buddy Hackett had all crawled under the bed covers, Ross could have been their outspoken love child searching for his baby daddy. Another Comedy Central Roast is just around the corner but he's tight-lipped on the celeb destined for a savage skewering. In the meantime, he continues to tour and here, on the eve of his San Francisco gig at Cobbs Comedy Club, he opens up about his creative process and more.

Greg Archer: So, what are you finding most amusing these days?

Jeff Ross: Oh my gosh. The audience. People always ask me about roasting whenever I come to a city, so I thought that instead of roasting celebrities, I could roast volunteers from the audience -- the fans. People who have come up on stage have been the most fun.

Greg Archer: On that note, tell us -- what does it take to be a good roaster?

Jeff Ross: Oh boy. Fearlessness, because you have say things that would be not always be said. That, and maybe a little naïveté, because inevitably, I could get smacked at any time. You know, every now and then a shoulder shrug seems to get me off the hook if I have gone a little too far. But you have to work at being a roaster. I work really hard on my material. You can't phone it in. You have to be on you're a game. People, especially the fans, expect me to bring it really hard. Nobody wants to see a soft roast. They want their roast well done.

Greg Archer: How long does it typically take you to, well, marinate your roast?

Jeff Ross: Weeks. It's like going to battle. I spend way too much time on it, but I take it very seriously. People always ask me what my favorite roast was, and I always have to say whoever is next.

Greg Archer: What do you love most about doing it ... and for that matter doing this "work" -- with your comedy, with roasting. You also wrote a book, and your doc was well-received.

Jeff Ross: It wasn't this way in the beginning, but it's the fans. And "roasting fans" have become somewhat of a movement. People are not just watching the roasts on TV, they are doing their own roasts at home, at bachelor and bachelorette parties, at retirement parties, at backyard barbecues. So, it's not just, "Hi you're funny, I like your show." It's like, "Thank you for teaching me how to do this." It blows my mind because the roasts were sort of a lost art form. It was like saying you were into jousting or something. No one really knew what it was. They are doing these roasts all over the world now. Comedy Central has franchised it --Africa, India, Mexico, England. I love it. It makes me so happy.

Greg Archer: Well, wasn't it Donald Trump that called you something like "one-man verbal assault unit?"

Jeff Ross: I think so. And it was the most prolific thing he ever said. And the most quoatable!

Greg Archer: The show in San Francisco is also one of the first places where you will do something a little different.

Jeff Ross: I'm changing it up. I am bringing my guitar and trying some "roasting" folk songs for the first time. San Francisco will be the true test to see if these songs are working.

Greg Archer: Tell me about being a kid. Did you know back then that comedy was your thing? Ever think you would be doing this?

Jeff Ross: Not in a million years. I knew in my heart something was different. I just did not know what it was. I thought I would be a disc jockey or rock star or managing bands. But I knew I wasn't going to be a coach or tutor.

Greg Archer: So when did you know? Who were your earlier influences?

Jeff Ross: That's a good question. My early influences were the great comics and the funny people in my family. As far as personally, I would have to go with my friends, my buddy Mark Chapin, who lives in Boston. After college, I didn't have much going on in my life. I was sort of this chubby loser and living at home with my grandfather. And it was Mark that said, "You are so funny, you should try a stand-up comedy class." He gave me the phone number and since nothing else was happening in my social life, I did it. Anybody who reads this who may be interested in getting into comedy -- take a class. It may just be the kick in the pants they need. I've been doing it for 23 years old at that point.

Greg Archer: One last thing. What's some of the best advice you have been given about life?

Check Ross out at Cobb's Comedy Club Aug 1-3. Watch the man at work below: