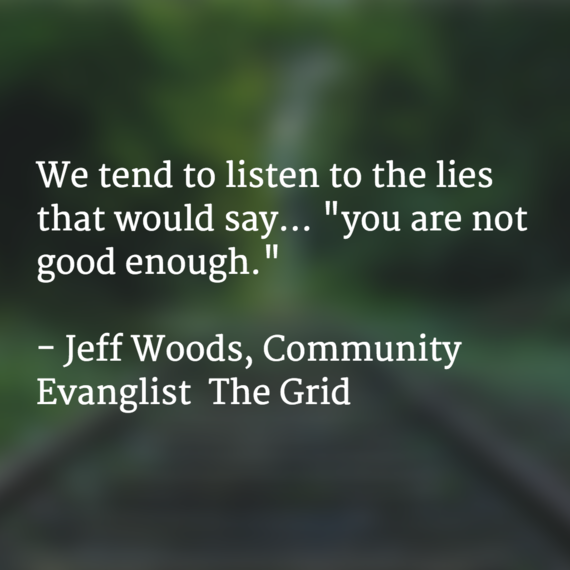 Jeff Woods is the Community Evangelist at The Grid. Woods is also an amazing photographer and an accomplished entrepreneur.

There is no clear route to becoming a creative. That very same journey becomes even more labor intensive when you strive to become a creative entrepreneur. Woods' struggle with his journey was not based on the lack of talent but on believing his disempowering story... "you're not good enough."

This statement is a common story that we tell ourselves which can limit your potential. But Woods had plans to becoming a world class photographer, so those limiting beliefs had to be removed.

Jeff found a mentor that could guide him and Woods also modeled Donald Miller, founder of Story Brand. Jeff understood that building a community that would support him was critical to his success.

As Jeff advanced on his epic journey, he began to believe deeply in his potential as a creative entrepreneur, and this allowed Jeff to take massive action. Woods became a platform speaker for Canon. And Jeff evolved into different mediums like design work for humanitarian projects, filmmaking, consulting, UX/UI design, and Jeff's latest project as Community Evangelist for The Grid.

It's been a chaotic trip but through the conflicts and wins Jeff Woods is living a fulfilled life.

So, Jeff, what is your story?

Something that learn early on from one of my favorite authors (Donald Miller) is what makes a good story. A good story is one that has a character that is faced with conflict or struggle and must dig deep to find resolve. When we choose our ambitions, they should be difficult, and we should anticipate and even welcome conflict.

I started out my career as a creative jumping into Photography. I had a mentor who was a photographer, and he took me under his wing. I never expected what would open up. When it all began, I did not know the first thing about photography. I could not even tell you what a F-stop was. However, that jump in the deep end put me on an amazing journey. I was a platform speaker for Canon and I was allowed to photograph all over the world. It came with its conflicts, trying to keep the lies in my head to a minimum.

We tend to listen to the lies that would say, “you are not good enough.”

What I learn by sitting in that process is that the soul usually knows what to do to heal itself. The challenge is to silence the mind. Part of the process of progress is the struggle. It’s important to align yourself with those on the same mission as you. (more on that later). Once I understood that I began to work on my strengths and neutralized my weaknesses. Over the years, I evolve into different “mediums” other than photography. I went into design work for humanitarian projects, filmmaking, consulting, UX/UI design, and as of late community evangelist for The Grid.

I get bored easily… I have more than one craft, more than one way of doing things. As one of my friends pointed out you are not ADHD, you’re a polymath. A polymath is a person whose expertise spans into a significant number of different disciplines. I am grateful to find the common ground between all my “Mediums.”

The execution of a creative idea can be a chaotic experience. So how do you organize, prioritize, and manage your creative ideas?

A great question and one that could be a book in an of itself. A creative by choice tends to live life with a bit of a chaotic approach. One thing I have notice that comes with this way of being is you will have high highs and low lows.

Exploring for me is a big part of my everyday life. I have taken that advice from my wife who is a well-known photographer as well. You have to prioritize time for yourself as a creative. You have to dip your toe in the cold water. Meaning, take on some new ways to create.

You don’t have to jump in, but you might want to experience some new things so I have learned to carve out time to allow that. I tend to have a Moleskine handy most of the time or my iPhone with various apps to help me align my day or my project.

I tend to collect article, art pieces, marketing material that appeals to me and my brand. I have created an idea box both physical and virtual where I store all those creative ideas or schemes. The hard part of managing my ideas is that sometimes they will be epic fails.

In those time, I am learning to take what I can from that and move on. I have learned to create a culture for myself that encourages experimentation and the free flow of ideas. And if I don’t know how to do something I look for resources to partner with me or teach me what I need to know.

How I prioritize is instead of focusing on one “big idea,” I consider many ideas and assess the opportunity for each. Then I validate those ideas and decide which path to go down. The validation process includes some variables like the market, customers, and competition.

I recognize when fear paralyzes me, it is a good sign. Fear is an indicator that I am on the right path. Fear tends to get me stuck in a proverbial rut. The dirty little secret no one talks about is that everyone is making it up as they go along.

Fear tells us what we need to do next.

What's the biggest mistake you made in your life and what did you learn from it?

The biggest mistake is being too hard on myself when I make a mistake.

That means being able to be vulnerable with myself and those close to me. Failure is misunderstood, failure means there is room to grow. Today I allow people to come alongside me and help me “grow” in my vision.

I am not in this alone. I now look for resources, while in the past I would put it all on myself. Resources could mean taking on side projects. Side projects allow me to be stupid. Going off the path creates a new appreciation.

I have many butterflies that come in and out of my life. Some just have a way of sticking around.

How can entrepreneurs find success in a marketplace that always seems to change?

I heard this a long time ago and have adapted it to my everyday life: “Old ways won’t open new doors.”

Disrupt yourself or be disrupted. Prime example of this is the story of Kodak. They could and did not want to realize what was coming around the bend, even though they built one of the first digital cameras.

Today they are irrelevant in the marketplace, they were insecure in who they were. Its one of the reason we struggle with insecurity because we compare our behind-the-scenes with everyone else's highlight reel. Have the confidence in yourself to figure out what to do next and if not fake it until you do.

What would you say to someone who wants to take the plunge into entrepreneurship?

Don’t look around for inspiration; the rest of us just get up and go to work. Products and services are being dematerialized and demonetized like never before. The entrepreneurs who win are those who can think exponentially.

If you are going to take on something take on something that others think you are crazy for taking on. We have all seen examples of this through Elon Musk, Steve Jobs, and Larry Page to name just a few. Same with what we are doing at The Grid. We are taking on a difficult problem, the website problem. Nobody has touched this technology that has been ignored by bigger tech companies.

We are using algorithms to publish content with the ease of social media. Using artificial intelligence to teach the computer to make decisions instead of humans. A personal designer consultant for the user that is doing the heavy lifting.

That would be my first advice dream big hustle harder. Align yourself with those who want to get into the arena with you and don’t listen to the critics who are outside the arena. Dream. Risk. Hustle. Repeat.

Why have you chosen to work for The Grid as Community Evangelist?

I did not see The Grid as a job but a movement. Work was never meant to be something we do just to make a living. It was meant to be a means of making a difference.

I just had to get out of my way and stop talking myself out of jumping into the deep end of the pool. Many thought my wife and I were crazy when we uprooted our family sold our home in Illinois and went on an adventure into the unknown. You typically don’t make those moves in your forties.

However, I have a strength, and that is being a connector and pioneer. The partnerships that I am able to create globally allow me to help remove the barriers of entry for small business to have a meaningful place to call home on the internet. I am too familiar with the struggle that small business owners have in today's marketplace.

The biggest pain point of my business was building a website. Then keeping it relevant and fresh was another issue. As soon as I built it, it was already stale. There is a profound shift happening on the web, a more personalized web. Most solutions being built on aging platforms, make personalization scalability, not reality. A website is the vehicle that people, like small business owners or artisans, use to communicate and execute their vision, product, or service.

There have been a few years of developing going on behind the scenes with The Grid. We are a platform first company. Instead of cashing in when Facebook came with an offer to buy us out. We wanted to stay the course and build something that was years ahead of it's time. Game changing platform tools that we have created like The Grid Colorverse and Typographyverse will ensure that your site will always be uniquely yours.

Reader Question: Are you waiting for inspiration so you can start your journey? Don't. You just need to start – so what will you do today to move one step closer to a life fulfilled? Share your answers on Twitter.

Building a latticework of mental models.