In 1804, over three consecutive evenings, President Thomas Jefferson completed a private spiritual project. Using the King James Bible, he took a penknife to the Gospels of Matthew, Mark, Luke and John, cutting out the Scripture he liked and pasting it into his own blank book. He called the book The Philosophy of Jesus of Nazareth and, fitting Jefferson's own worldview, it ignored Jesus' miracles and resurrection and scoffed at the idea of God's having a son.

The so-called Jefferson Bible, the original of which is now owned by the Smithsonian Institution, has long been studied as an example of one founding father's belief in God and his dislike of what he saw as the "corruption of schismatizing followers" of Christianity. Lesser known are the reimagined Gospels produced by two equally famed writers who followed Jefferson.

In 1846, around the time he was writing David Copperfield, Charles Dickens penned The Life of Our Lord, a recounting of the life of Jesus to share with children. The book, adapted from the Gospel of Luke, was secretly passed down by his descendants and remained unpublished until 1934. Meanwhile, Leo Tolstoy -- in the midst of a spiritual crisis in 1886 -- created his own condensed Bible, a 12-chapter recounting of Jesus' life. The Gospel in Brief not only shortened the story but rewrote entire parts.

Instead of laboring separately, what if the three men could have come together?

That's the scene imagined in "The Gospel According to Thomas Jefferson, Charles Dickens and Count Leo Tolstoy: Discord," which opened this week at the Geffen Playhouse in Los Angeles. Part comedy and part thought-provoking, emotional theater, the play imagines the men joining in an attempt to write the perfect Gospel. Voracious debate about earthly life and the cosmic world ensue.

"The play becomes a Rorschach test of what you are bringing into it as an audience," said author Scott Carter, who is familiar with pitting political and theological foes against each another from his time as a writer for Bill Maher, first on "Politically Incorrect" and currently as executive producer of "Real Time" on HBO. "What I want people to have when they leave is the same sense of urgency that I did."

The spiritual questions that consumed Jefferson, Dickens and Tolstoy are the same ones that have intrigued Carter in the 28 years since he suffered a near-death asthma attack that led to a week-long hospital stay. Questions of his place in the world, his relation to God and his life's purpose confronted him head-on, he said. As someone who grew up "vaguely Protestant," Carter made a promise to be open to all spiritual experiences that came his way.

That included reading the Biblical works of one brilliant president and two illustrious novelists. 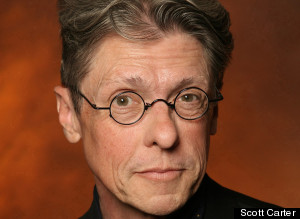 As a standup comedian before making the switch to TV in the late 1980s, Carter recounted his near-death epiphany in "Heavy Breathing," a monologue about God and the quest for meaning. Later, having dabbled in shamanism and hallucinogens, he performed "Suspension Bridge," a comedy show about his spiritual samplings. "I made this agreement with the universe that if anybody wants to talk to me about religion, I'll talk. I'll try anything. And when you open yourself up that much, especially in a city like New York, a lot of things will happen to you," he once told a reviewer from the Tucson Weekly.

These days, Carter's spiritual practices have turned more inward: He meditates 20 minutes twice daily, tries to write in his journal regularly and ends each day with a reading that touches upon issues of spirituality or philosophy.

"I have not had a doubt about the existence of God since I got out of the hospital in June of '86. I'm interested to find out what is similar between religions, what is shared in the teachings of Buddha, Jesus and Lao Tzu," Carter said. A lesson he learned from Jefferson, Dickens and Tolstoy that he has applied to his own life: "One does not have to accept all of a given doctrine. One can negotiate with his own conscience what one actually accepts."

It's a message brought to life in his play, which received an initial run last winter at Los Angeles' NoHo Arts Center.

The three great men are not portrayed as perfect seekers. A dramatic Dickens, played by David Melville, doesn't shy from talking up his high intellect and his view of himself as a fine family man. Jefferson, played by Larry Cedar, presidentially boasts of his achievements. And Tolstoy's strident pacifism, inspired by the call to "resist not evil" from the Sermon on the Mount, is brought to life by Armin Shimerman.

Each actor, too, has drawn his lessons from the play.

"I have always been a practitioner of 'what will be will be' -- a tangential corollary to 'resist not evil' -- and I have found that that mindset has put less stress in my life and has proved over and over again that seeming defeats usually lead to new scenarios with great joys," said Shimerman. "Tolstoy criticized institutional religions, and though I am Jewish, I have always thought the same."

The philosophical discourse on stage has been a departure for all. Melville, co-director of Los Angeles' Independent Shakespeare Company, performs Dickens' "A Christmas Carol" each year and played Baron Darnay in the 2011 adventure film "Ironclad." Cedar was the opium-addicted Leon in the HBO series "Deadwood." Shimerman was Quark, a Ferengi bar owner, in "Star Trek: Deep Space Nine" and Principal Snyder in "Buffy the Vampire Slayer."

"I never knew the spiritual aspect of Dickens or his treatment of the Bible, but of course we've all heard of him. But this is a whole other side," said Melville. "Each man thinks he is the better one, but each also has a negative aspect of himself. Jefferson was a slave owner. Tolstoy was a hypocritical, egregious fornicator. Dickens, who saw himself as a perfect Victorian husband, treated his wife horribly."

That's one takeaway Carter hopes that audiences, who can catch the play through Nov. 23, will mull over.

"What's really valuable," Carter said, "is acknowledging that and asking those big questions."