SAN FRANCISCO -- Immigrants were drugged and sexually assaulted by a man who impersonated a police officer and threatened to harm them if they reported him, the San Francisco Police Department said Monday.

Jeffrey Bugai, 35, preyed upon recent immigrants to the Bay Area from Central America who had limited knowledge of English, police said.

Bugai, dressed in a navy-colored cop's uniform, sometimes handcuffed people and put them in his white Ford, which resembles an unmarked police car, according to police. They were brought to his home, where Bugai "would administer intoxicants, coerce them and/ or force them into committing sexual acts," the police statement said.

A police spokesman declined to reveal how many people were allegedly tricked and assaulted by Bugai. Police also were tightlipped about how the investigation began.

Authorities said they were looking for additional victims. Bugail targeted people in San Francisco's Mission and Ingleside neighborhoods, which have large Latino populations, as well as parts of the nearby cities of Oakland and Hayward, police said.

Bugai was arrested on July 10 on a warrant charging him with kidnapping with intent to commit sexual assaults while impersonating a police officer. He remains in custody. 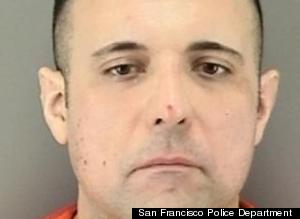