Over the weekend, I came across this massive 'dossier' on Jeffrey Eisenach, who is currently leading the FCC's transition efforts. It is 137 pages and includes reports, filings, as well as emails, and a host of interesting items that need further investigation. (We believe this 'dossier' was compiled by/with the help of the NY Times and other reporters.)

And according to Fox News, the new vice president-elect, Mike Pence, is supposedly cleaning house of lobbyists who are part of the Trump transition team.

"The move to get rid of lobbyists in key roles was one of the first decisions made by Vice President-elect Mike Pence in his role overseeing the construction of a Trump administration."

We would suggest that Jeffrey Eisenach fits the bill. We already wrote about some of his ties to Verizon and the other phone and cable companies, including Comcast.

What follows are some of the notes that were compiled and linked to documents which bring into question the activities and conflicts of interest of Eisenach, who appears to be acting as a lobbyist for his clients, such as Verizon.

Example: The cache includes emails between Eisenach and FCC staff, among other disturbing connections. In one case, Eisenach is having an FCC Commissioner lay out the case against 'regulations' at an AEI event.

"Asking a Member of the F.C.C. to Help Combat Net Neutrality Rules

"In a 2014 email, again sent from his think tank account, Mr. Eisenach encouraged a Republican F.C.C. commissioner to use an A.E.I. event to 'lay out the case against' such regulations. Mr. Eisenach reinforced this message by writing commentary pieces, shown below, using his title as a think tank scholar."

There are a number of emails linked, including this excerpt. 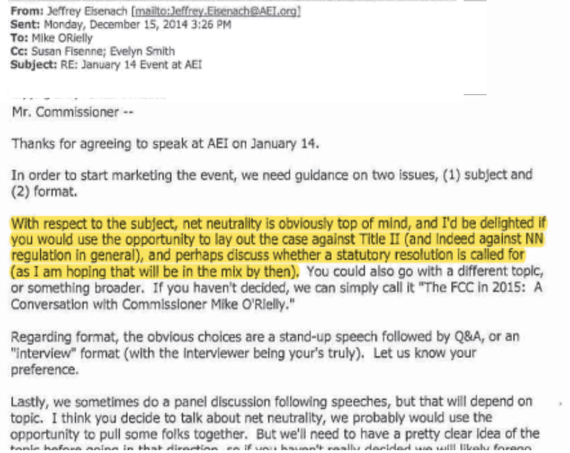 AEI is a 501(c) (3) educational organization and it claims it does not take positions on public policy issues.

"AEI does not take institutional positions on any issues. The Institute is supported primarily by donations from individuals, corporations, and foundations. Gifts to AEI are tax-deductible to the fullest extent of the law."

Comparing this quote and the email, one has to realize AEI is not supposed to be lobbying for Verizon and the other phone, wireless and cable companies. It could even be violating their IRS granted non-profit status. Now, it could be that this just shows the coziness of the FCC transition team leader with the FCC staff, but considering that Eisenach's client, Verizon, benefits from these dealings, this brings up a host of ethical violations, or other acts that need investigation.

This cache of work on Eisenach is extensive. I highlight these notes that are included with the hope that others go through the material and ask whether Eisenach should be removed as a paid corporate lobbyist, and whether an investigation into his dealings, (not to mention AEI and the other non-profits) with the FCC or other government agencies is overdue.

Due to copyright, I will list only a few of the notes, with each representing multiple pages/documents, emails, etc.

The Dossier on Eisenach

"During the battle over 'net neutrality,' Mr. Eisenach, writing as a scholar at the American Enterprise Institute, was one of the most prominent voices arguing against further regulation. But he was also doing work through his consulting firm, NERA, on behalf of industry players like GSMA, which represents Verizon and other cellular companies. In Spain, Mr. Eisenach gave a speech to the group, whose board members are listed below. Excerpts of the report he discussed are also below."

"A month before the speech in Spain sponsored by the telecommunications industry, Mr. Eisenach, in his role as an academic expert, led an A.E.I. gathering in Washington devoted to federal telecommunications policy. He raised many of the same concerns about broader regulation that he had expressed in his paid consulting work. Here are excerpts from a transcript of the A.E.I. event."

"Mr. Eisenach also spoke at the 2015 GSMA conference in Barcelona, Spain, along with a fellow NERA consultant. In the lead-up to the event, Mr. Eisenach invited two Republican members of the Federal Communications Commission to a private 'evening of Mediterranean and Catalan cuisine' hosted by the consulting firm."

"Mr. Eisenach, in a brief interview, said he had not worked recently on issues related to net neutrality. But his consulting firm, in a February 2015 news release, noted his continued involvement in the debate."

"When invited by The New York Times' Op-Ed page to write a column on net neutrality, Mr. Eisenach described himself as a former federal official and a 'visiting scholar' at A.E.I. The article did not disclose his consulting clients."

"Here is a copy of the remarks that Mr. Berry, from the F.C.C., gave at the January 2015 A.E.I. event organized by Mr. Eisenach. Mr. Berry denounced the Obama administration's proposal to regulate the internet."

"In a 2014 email, again sent from his think tank account, Mr. Eisenach encouraged a Republican F.C.C. commissioner to use an A.E.I. event to 'lay out the case against' such regulations. Mr. Eisenach reinforced this message by writing commentary pieces, shown below, using his title as a think tank scholar."

"Mr. Eisenach also wrote to the Republican chairmen of two House panels -- at their request -- about potential further regulation of the internet, describing his research for A.E.I. and an open letter to the F.C.C. chairman that he had written with other economists opposed to regulating the internet as a utility. He described himself as an A.E.I. scholar, with no mention of his consulting work."

"Verizon is the company that appears most often in these disclosures. The work includes a 2013 regulatory submission for the company and a 2010 challenge to an F.C.C. plan to force telecommunications providers to open their networks to competitors. Here are excerpts. Verizon declined to comment."