MIAMI -- The Marlins obviously haven't padded attendance enough through sweet deals like allowing fans over 55 into Thursday games free or giving away select tickets for a $1.25 service charge at select bars.

So on Saturday night, they really ran a risky promotion to beef up their major league-worst crowds.

Jeffrey Loria walked in the house.

In Game No. 43, in the top of the second inning, with the Marlins trailing, the team owner made his way to his field-side seat at Taxpayer Park for the first time this year. And he was accompanied by the most dangerous sound in sports.

No boos. No chants. No sense of recognition beyond a couple of in-house employees or thought of public accountability for what is playing out on a major-league field.

Maybe that's simply because people didn't notice the Marlins owner re-entered baseball society for the first time since this offseason's idiocy. More probably, by now, anyone who cared enough to scream was doing something else.

Numbers tell the story of the season Loria has cultivated, as they always do in baseball:

-- Last in the majors in runs scored. They had 115 runs entering Saturday's game against Arizona. The next-worst team had 139. The Marlins average 2.67 a game is challenging the 1942 Phillies worst-ever average of 2.61 runs scored since the Deadball Era ended in 1920.

-- Last in the National League in wins. The Marlins entered Saturday tied with Houston for the worst record in the majors at 11-31. This battle will play into September, no doubt, proving why they play 162 games.

-- Last in the National League in attendance. Only Cleveland and Tampa Bay average worse in the majors than the Marlins' 18,076 fans a game. But Tampa Bay might soar ahead if it gives away tickets to fans over 55.

All of those sad feats are built to last this year, too. There's no way out now, and no blaming any of the players, many of whom are so young they order post-game meals from the kiddies' menu.

He gives a laugh, because humor still has a preferred place in a sinking season like this one. It's a healthy emotional refuge. Redmond says all the right things, in all the right ways, about fighting through and keeping the proper attitude, starting with himself.

"That's always been one of my strengths, and I've been through so much as a player that I know how important not getting too up or too down is," he says.

But seriously. This team Loria built has one everyday major-leaguer in the lineup right now in shortstop Adeiny Hechavarria. And he's a rookie. With injured Giancarlo Stanton, it's two.

So they're last in every offensive category that matters -- hits, runs, on-base percentage and slugging percentage. If you want to hope in something, hope on this: Young players would love the opportunity to play here.

In 2006, when the Marlins had the same 11-31 record they entered with Saturday, Cody Ross sat unused on a Cincinnati team. When told he was traded to the Marlins, Ross says, "I let out this loud scream, 'Yes!' Knowing how bad they were, I just wanted a chance to play."

That '06 team began to turn around when Ross arrived May 26 and actually climbed above .500 before season's end. He winces when asked if that's possible with these Marlins.

"That doesn't happen too often," he says.

The good news from Saturday: The man who constructed this season finally took his rightful seat to watch the nightly train wreck.

The bad news: No one seemed to notice. Apathy has set in. And it's still May. ___ 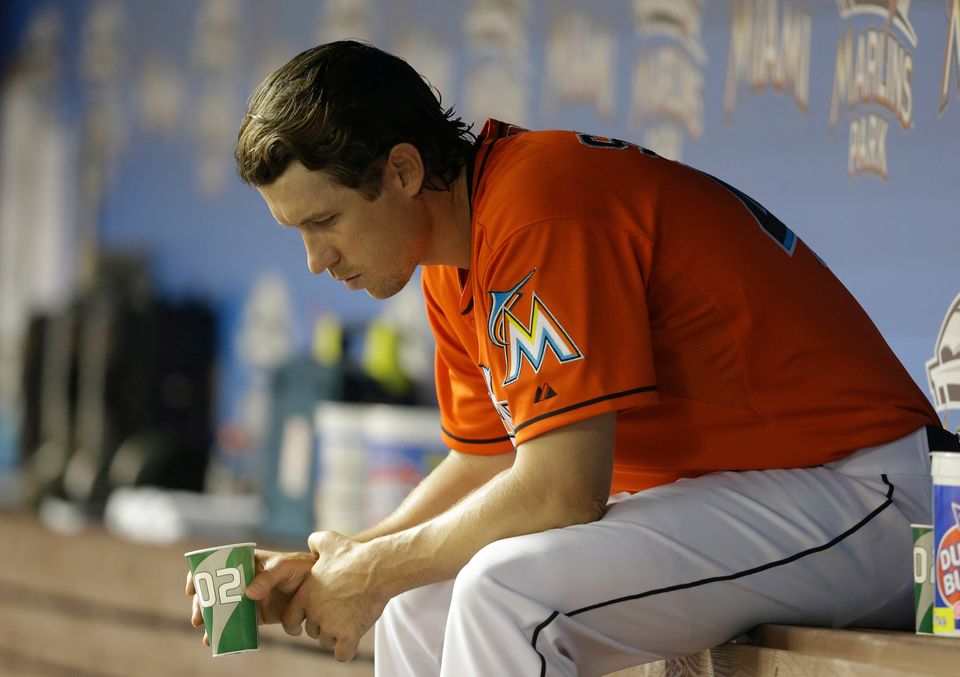 1 / 30
Kevin Slowey
Miami Marlins starting pitcher Kevin Slowey sits in the dugout in the fifth inning during a baseball game against the New York Mets, Tuesday, April 30, 2013, in Miami. The Marlins defeated the Mets 2-1 but Slowey remains winless since 2010. (AP Photo/Lynne Sladky)
AP