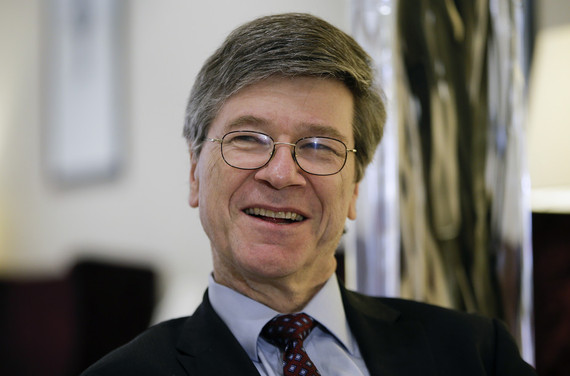 Jeffrey Sachs: 'we need to press governments to follow through on what they've promised'. Max Rossi/Reuters

It might be the most ambitious agenda set by the United Nations yet: transforming the world we live in by 2030. But more than a year after the UN announced the Sustainable Development Goals (SDGs), are member states in a position to use them in framing domestic policy?

The SDGs - made up of 17 goals, targets and indicators - range from eradicating poverty and ending hunger to ensuring equality in education. They follow the Millennium Development Goals (MDGs), which were set in 2001 and expired at the end of 2015.

Jeffrey Sachs is one of the world's leading experts on economic development, global macroeconomics and the fight against poverty. He holds the position of Special Advisor to the United Nations Secretary-General on the Sustainable Development Goals, and previously advised both Ban Ki-moon and Kofi Annan on the MDGs.

The path to success in reaching the SDGs promises to be challenging. We invited five scholars from around the world to put their questions to Sachs on how we might get there.

M Niaz Asadullah, University of Malaya: While the Millenium Development Goals produced a successful anti-poverty movement, our search for silver-bullet solutions, such as micro-credit, proved futile. Looking forward, which do you consider more important to ending global poverty by 2030: innovative and scalable poverty programmes or inclusive growth?

Both. Success in ending poverty includes both broad-based economic growth and targeted interventions in health, education, infrastructure, and social support (for the disabled, indigent, vulnerable and elderly).

Growth is important in providing jobs, skills, export earnings, and national income generally. Targeted interventions are important to ensure universal access to social services and to provide resources for those who cannot fend for themselves.

In both cases, we will need - and have the opportunity for - innovation, as we benefit from the worldwide revolution in information technology, which will raise productivity across the economy.

Some of the developing world's MDG success stories involve countries that lack the basic rule of law, and also spend only a small percentage of GDP on health and education. With the inclusion of good governance, education quality and skills as SDG targets, how optimistic are you about achieving the new goals in my region, South Asia, by 2030?

South Asia has the potential for rapid growth and for deploying incomes towards health, education, infrastructure, and job skills.

Yet to accomplish this, South Asian countries should step up their efforts towards peace, as the distraction of war and military spending, not to mention terrorism, is draining energy and revenue. With cooperation, South Asia could become a hub of advanced information technologies, e-governance, and renewable energy.

Harini Amarasuriya, Open University of Sri Lanka: I am increasingly cynical about the effectiveness of universal targets and goals (such as the SDGs) in making a difference in people's lives. My own country, Sri Lanka, is regularly hailed for its "achievements" in the field of education. Yet the fact is that for the last 30 to 40 years, the education sector has been in crisis. How can we expect universal goals and targets to address the specific concerns of different countries?

You complain about Sri Lanka. I could do the same about my own country, the United States, which is also corrupted politically and tremendously over-invested in the military.

The goals offer a framework for better politics and policies. To leverage the goals into national action we need to do several things: press governments into declaring plans to achieve the SDGs, and to measure them year to year; engage key stakeholders, especially universities, businesses, and civil society to propose ways to meet the goals, and to monitor progress; and mobilise political actors to use the goals in their appeals for votes and public support.

None of this is easy. I don't see an alternative, however.

The reforms you advocate assume that those currently in dominant positions politically and economically would consent to changes that weaken their domination. Isn't this naïve?

I see progress through three approaches.

First, we need a victory of ideas, based on sustainable development.

Second, we need to press governments to follow through on what they've promised.

Third, we need to mobilise social and political actors to struggle for social justice and environmental sustainability. And we need to link SDG leaders across countries for success. That is one of the main purposes of the UN Sustainable Development Solutions Network.

Maty Konte, United Nations University: Several Sub-Saharan African countries will need a significant amount of funds to meet many of the Sustainable Development Goals by 2030. Yet many of them do not have the required funding for this purpose. Official Development Assistance inflows have declined in recent years, raising the question: how will Sub-Saharan African countries meet the targets by 2030?

Development aid has basically stagnated, not declined. We need to reinvigorate development aid by bringing in new governments (China, Korea, the Gulf States), and by pressing the US to shift its vast military budget towards development assistance.

Nonetheless, much of Africa's growth in the coming decades will come through primary commodities and diversified services, with the latter empowered by information and communications technologies. In much of manufacturing, automation and robotics will mean fewer jobs globally.

Mizan R Khan, North South University: At this time of low price of fossil fuels, how can the global community ensure access to affordable, reliable, sustainable and modern energy for all?

Fortunately the costs of renewables (wind, solar, geothermal) plus batteries are also falling sharply. There is also considerable scope for increased hydroelectric power in some regions (for example Central and West Africa, and South Asia).

For some low-income regions, such as East Africa, new natural gas finds should be mobilised as well. There are, in short, many energy options for low-cost, accessible, and low-carbon energy.

Can adequate funding for achieving the SDGs in the developing countries be mobilised only through budgetary allocation from donors, without taxing some global public "bads", such as carbon emissions, currency speculation and the arms trade?

We do indeed need to divert resource flows generally from the "bads" (carbon emissions, deforestation, currency speculation, and arms trade and wars) to the goods (social services, renewable energy, conservation).

Rut Diamint, Torcuato Di Tella University: Criminality is an element that makes promoting peaceful and inclusive societies for sustainable development very difficult in a lot of countries. What are your proposals to overcome this problem?

We need to have much clearer standards and crackdowns on corruption and corporate crime. This should involve personal culpability of corporate executives whose businesses are caught in criminal dealings. It should also involve global efforts to stamp out tax havens and associated capital flight.

And it should involve clear, globally agreed standards on the "Polluter Pays" principle, when multinational companies degrade the physical environment in host countries.

A lot of institutions in developing countries are not accountable, especially the armed forces and police, which hide behind secrecy and the defence of their autonomy. What are the most urgent measures that civil society could advocate to address this situation?

This problem exists in the advanced countries as well as developing countries. Think of the lawlessness and secrecy of the CIA for example. For that reason, we need not only local politics to demand accountability, but globally agreed frameworks as well. The cross-border shipments of arms and funding of rebellions and coups is profoundly dangerous and unacceptable.